Not far from the city of Idabel Oklahoma, one can find the family of Louisa Gibson. She was a citizen of the Choctaw Nation. Her family lived in the town of Shawneetown, in Red River County of the Choctaw Nation, in Indian Territory. Louisa appeared in front of the Dawes Commission submitting an application for herself and for her children. Her children were Geneva Shaw, Luanna Shaw, Perry Shaw, and Australia Gibson. The father of the first three children was Sandy Shaw, presumably a previous husband. Australia Gibson's father was Hiz Gibson. 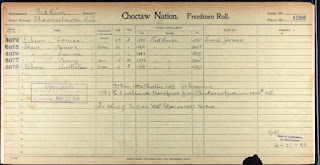 Louisa was born enslaved and was held enslaved by Susan Jones, wife of Robert Jones. Robert and Susie Colbert Jones were the largest slave holders in Indian Territory. Louisa's parents were Aaron Shoals, and Amanda Shoals. Coming from the largest slaveholder in Indian Territory, Louisa's parents clearly had chosen to have their own name, and never used the surname of their former enslavers. 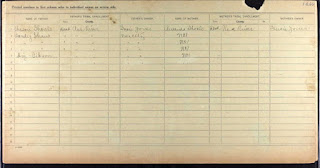 Reverse side of card.
Source: same as above image

Many members of the Gibson family were also listed on the 1896 Choctaw Roll. 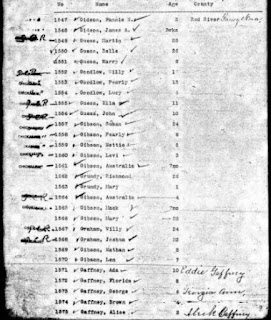 Louisa had another daughter, Sallie who was married at the time of the Dawes Commission and she appeared in front of the commission on her own. Information on Sallie Wooten is found on Choctaw Freedman Card #1387, enrolling her own children Beatrice, Prentice and Everett Wooten. Her husband Garrett Wooten was not a citizen of the Choctaw Nation. Like her mother, she and her family also lived in Shawneetown. 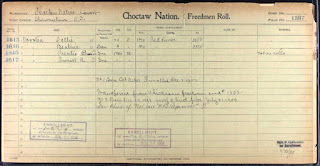 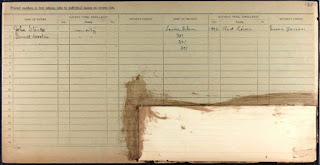 Reverse side of card.
Source same as for above image

The application jackets for Louisa revealed very little additional data on the Gibson family. The expected interview was not included in the file. Only a small memorandum was in the file reflecting the same data for the family. 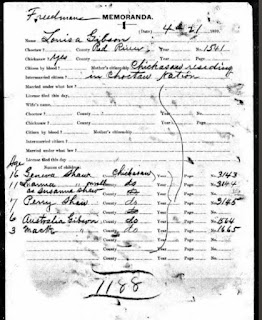 Thankfully, the family members did receive their land allotments. The standard land allotment data was present including plat maps, and descriptions of the land that they received. One standard data set was collected from Louisa and put onto the pre-printed forms. Like all families admitted, a set of land records appeared for each person including the young children, so the family researcher will want to obtain the files for each family member. 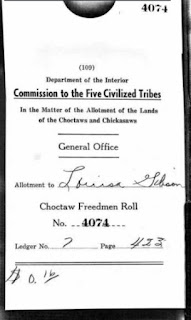 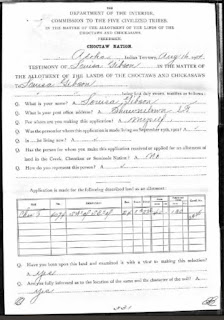 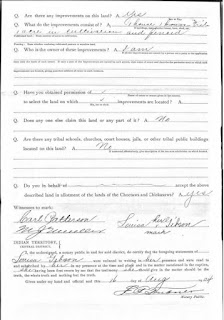 
It was mentioned that the family was transferred to the roll of Choctaw Freedmen, from a roll of Chickasaw Freedmen. The same data appeared on the file and the application jacket contained only one document that was significant. Apparently Louisa had a son Mark, who died in 1900. A document reflecting his death appeared in that file.

So in spite of the few records, Louisa Gibson and her children by both Shaw and Gibson have a strong legacy left upon the soil where they lived. They were enumerated in the Federal Census in 1910, now living in McCurtain County of Oklahoma. The question arises whether they lost their land as so many tribal citizens did, or was land sold and they relocated or was this the same community where they had always lived? The old settlement of Shawneetown, where the Gibsons had lived during the Dawes era, was located near what is today's Idabel Oklahoma, and Idabel is in McCurtain County.

By 1910, Louisa had either been widowed, or her second husband Gibson had died, as she was now using the name of Louisa Shaw. 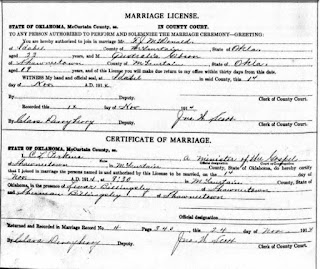 Not much more is known about the Gibson family of Choctaw Freedmen, however, their legacy continued in the same community for decades.

Hopefully the descendants of Louisa Gibson Shaw  will be known, honored and celebrated.


**********
This is the 27th article in a 52-article series devoted to sharing histories and stories of families once held as enslaved people in Indian Territory, now known as Oklahoma. The focus is on the Freedmen of the Five Civilized Tribes, and these posts are part of an on-going project to document 52 families in 52 weeks.

Posted by Angela Y. Walton-Raji at 7:49 AM No comments:

The Legacy of the Nero Family of the Cherokee Nation 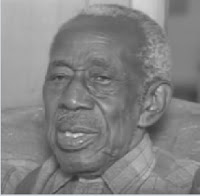 This family's story is not an unusual one, and the Neros lived a quiet life in the early 20th century. About  8 decades later, the child Roger whose name appears upon the family's enrollment card, would emerge as one not to forget when he became the first of many litigants that would initiate a fight for their birthright. He was one of many original Dawes enrollees, who would later find that racial prejudice and anti-black racism would prevail for many years within the arena where he lived and died.

In the 1980s, the case of Roger Nero vs. the Cherokee Nation would begin a 20 year saga reflecting the plight of the Freedmen of the Cherokee Nation. His story was one of disrenollment, disenfranchisement and racial bias against the descendants of those once held enslaved by Cherokees in the years prior to the Civil War. What eventually emerged was a battle of Cherokees against the descendants of those they once held enslaved. The Freedman case was lost, and Roger H. Nero, now an elderly man died, now experiencing in his final years, racial bias that would prevail in the nation in which he had for his entire life, lived, voted, obeyed the laws, and died.

However, in the past 20 years since the Nero case, there have been more court cases within the Cherokee Nation, with Bernice Rogers Riggs, Lucy Allen, and most recently Marilyn Vann to take up the mantel for justice once again. And most recently, the "Vann case" as some refer to it, was finally acted upon by Judge Hogan, on August 31, 2017.

Roger Nero died with the stain of a racially motivated bias hurled at him. He courageously fought against it, but never lived to see the victory of those who would carry on the fight for the birthright of all people within the nation where he was born--that of the Cherokee Nation.

In honor of the ruling and honoring the first litigant in this 20 year old saga, the legacy of the Nero family is shared in this post.

Nero Family History
The Nero family of the Cherokee Nation has a deep history reflected on their family documents from the Sequoyah District of the Cherokee Nation. In April of 1901 Sarah Nero, a young woman married to a Creek citizen appeared in front of the Dawes Commission to enroll herself and her two children as Cherokee Freedmen. Her children were two year old Roger and three month old Jesse Corinne Nero.

Sarah, their mother was a  young woman of 25, and thus had not been enslaved. But on the reverse side of the card, her parents are identified and her mother had been enslaved by James Benge, a family well documented in the Cherokee Nation. The family of slave holder James Benge was on the roll of Old Settlers, and more Benge ancestors were on earlier rolls emanating from Georgia before removal to the west. 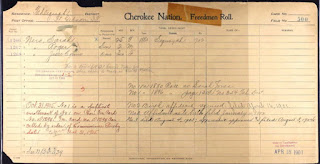 
Sarah's father was Freeland Jones, and her mother was Nancy Logan. Her father was deceased at the time and he was once part of the Sequoyah district. It is not clear whether Freeland Jones was a slave or a free man. He died before enrollment so this may not be known. But Sarah's mother's history is reflected, and her mother Nancy was enslaved by James Benge. 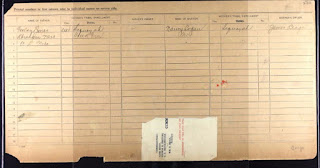 (back side of same card)

For some reason there was doubt expressed in the initial application of Sarah and her children, for they had originally be placed on a roll where there was doubt concerning her status. A small note appeared on the lower left corner of the front of the card stating that the matter was later resolved.

Application Jacket
The application jacket for Sarah Nero, was rich with documents including an interview, a birth affidavit for her children, and a hand written letter. The interview though short 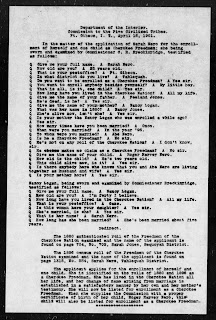 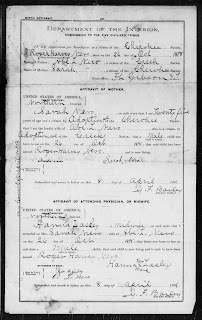 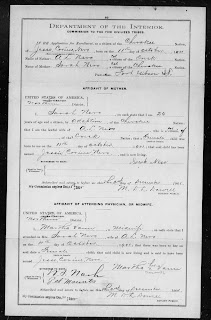 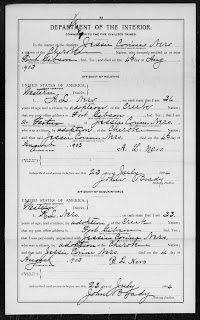 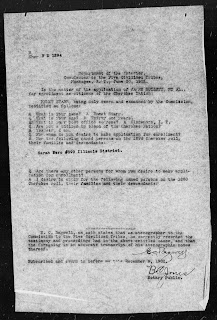 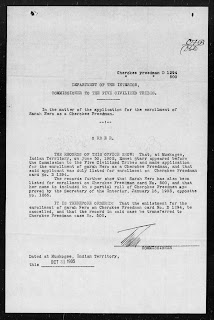 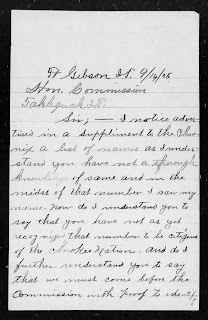 (Hand-written letter from Sarah to the Dawes Commission)
after seeing her own name in the newspaper, on a list of Cherokees who were unaccounted for or "missing".
Her letter would eventually clear up what appears to have been a clerical error on someone's part.) 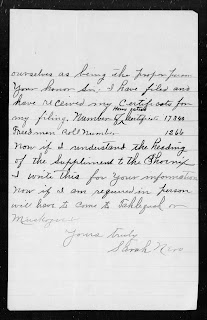 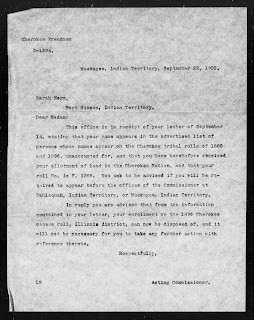 A Creek in the Household
Sarah Nero's husband was Abraham Nero. He was not Cherokee, but was, in fact a member of the Creek Nation. He was enrolled as A. L. Nero, and his enrollment card from the Creek Nation is #573. 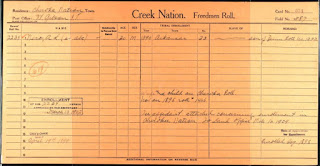 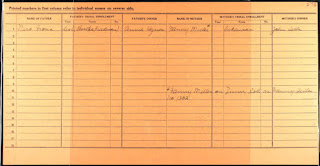 (back side of card)

A.L. Nero's father was Nero Irons, who was, in fact a Cherokee citizen. Irons had been enslaved by Annie Hynes. His mother Fanny had once been enslaved by Creek John Sella. It is not certain where the Nero surname was from, and why A. L. or "Abe" chose that name and not the name of either of his parents. Was there possibly a family tie to other Nero's in the Territory? (There was a Nero family that lived near Okmulgee, and are buried at the small Nero family burial ground near Eufaula but direct ties to that family are not known.)

The Nero family with ties to both Cherokee and Creek Freedmen lived most of their lives in Cherokee country, and the young child Roger as well as others would remain in the small community in and around Fort Gibson for most of their life.

This family profile reflects a family firmly confident of their identity, and hopefully, the recent case will finally put to rest an ongoing saga of identity, heritage and citizenship. And it is hoped that the spirit of Rev. Nero, can finally rest in peace with knowledge that his descendants are now able to claim citizenship in the nation to which they have been connected for the last two centuries. His struggle was not in vain.

This is the 26th article in a 52 article series devoted to sharing histories and stories of families once held as enslaved people in Indian Territory, now known as Oklahoma. The focus is on the Freedmen of the Five Civilized Tribes, and these posts are part of an on-going project to document 52 families in 52 weeks.

Posted by Angela Y. Walton-Raji at 5:08 PM No comments: