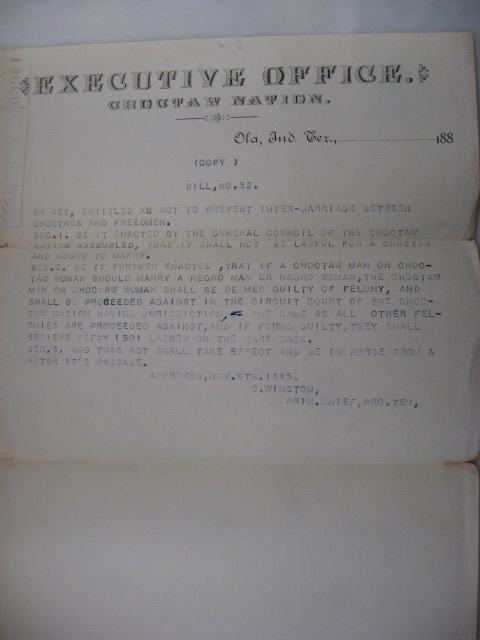 In the years after the Treaty of 1866, there were many issues facing the former African slaves in Indian Territory.  In the Choctaw Nation there were concerns that the many Freedmen who were  of mixed Choctaw & African Ancestry would have an effect on the larger community.

At the time of the adoption of the Freedmen into the Nation finally as citizens in 1885, there was a direct effort to prevent further contact between the African Choctaws and those Choctaws who were either full blood or mixed with white ancestry.

Among a box of letters at the National Archives in College Park Maryland (Archives II) one document was found coming from the Executive Office of the Choctaw Nation in 1885.  This explained a new law being passed as the Freedmen were adopted officially into the nation.  The law made inter-marriage with persons of African Descent a felony, and punishment to be delivered with 50 lashes, if found guilty of the crime of inter-marriage.  The goal was to prevent further increase in the population of persons of Negro blood having a claim of Choctaw blood ties to the nation.

100 years later in the 1980s when the Choctaw Nation made revisions, in the constitution, like the other former slave holding tribes, the descendants of Freedmen were excluded from the nation officially.  A policy that continues to this day.
Posted by Angela Y. Walton-Raji at 7:25 PM

So sad then and now.