Education for Freedmen in the Creek Nation 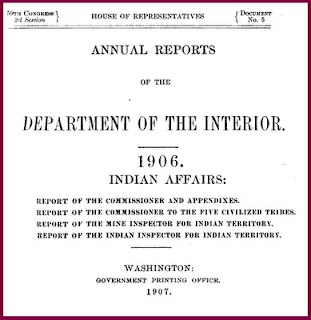 Recently, I was thrilled to come across some information in the Congressional Record pertaining to education for Freedmen in Indian Territory.

Of interest to me has been the establishment of schools for Freedmen in the whole of Indian Territory. In the Creek Nation, Evangel Mission, the remains of which are now the home to the Five Tribes Museum, has it's own history and is one of the few school buildings that stand in Oklahoma today that educated former Indian tribal slaves. And many are familiar with the Tullahassee Mission School. A major tribal leader of the Creek nation, Sugar T. George was superintendent of that school for some time.

In the years after the Civil War,  the struggles of the former slaves from all of the Five Slaveholding Tribes was ongoing, and education was a continuing issue. A few images of schools here and there, have appeared in historical journals providing occasional glimpses into the lives of the Freedmen, and at some of the private religiously run boarding schools, but I have never seen a comprehensive list of day schools, sometimes referred to as neighborhood schools, until recently.

The year before statehood was 1906 and the 59th Congress was in session. A detailed report coming from Indian Territory was submitted and among the data was rich information pertaining to the day schools.

Some tribes were more ambitious than others in allocating funds for their children, including the children of their former slaves. Stable schools, day schools, boarding schools and neighborhood schools were created in many of the towns and hamlets in Creek Nation towns, and I came upon one list that was very interesting as it listed the schools by name and the race of the student population was also included.

As a result I was able to extract the names of the schools for African Creeks, and was able to compile a unique list of Freedmen schools in that nation. 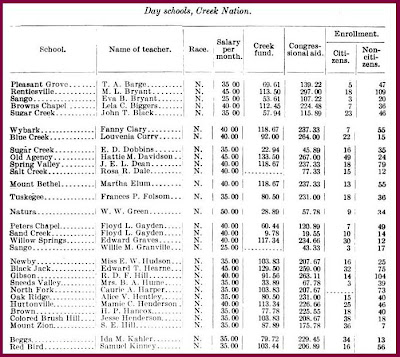 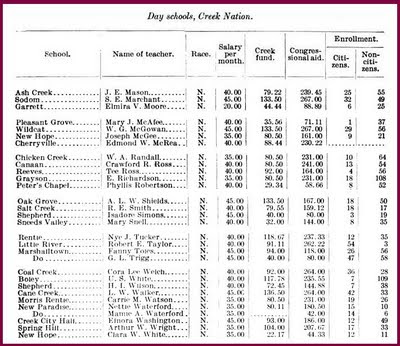 This is probably the first and only list created name each of the Freedmen Day schools in the Creek Nation. I should mention however, that private schools such as Flipper Davis College and others private schools funded by religious denominations will not be on this list. This list, however might provide additional information for other researchers who seek to document the history and lives of the Freedmen in greater detail.

I shall in a future blog post include Freedmen school lists from the other tribes.