Politics of 100 Years Ago Addressed the Disenfranchisement of Chickasaw Freedmen 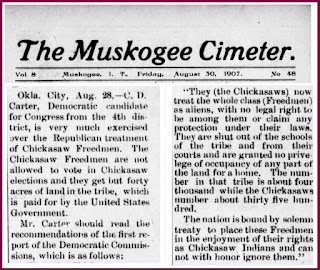 A 1907 article written in an issue of the Muskogee Cimeter reflected an issue that still has ramifications today. The article addressed the challenges and issues facing the Chickasaw Freedmen over 105 years ago.

During an election year, C.D. Carter who was a candidate for Congress at the time, addressed head one the issues as they affected several thousand disenfranchised Chickasaw Freedmen.

The passage of time, of course has come to bring about the disenfranchisement of the Freedmen of all of the Five Slave Holding tribes and their alienation, from the tribe into which the Freedmen of 100 years ago were born. But thankfully the records remain however to research and keep alive the history of thousands of people enslaved in the Territory and who helped to create the state of Oklahoma in many ways.

The challenges that they faced are found in many records, some tucked away in archives and yet to be digitized or published.

The politics of 1907 Oklahoma have the same vocabulary of 2012. However, the difference, is that through isolation and alienation, descendants of many of the Chickasaw Freedmen have waned, when time itself presented the challenges of each new decade--of segregation, of a national depression, and of two world wars. The most critical impact of the more permanent aspect of disenfranchisement come from the effects of the Great Migration that took many Freedmen and their children away from their native Oklahoma soil, to places northward, eastward, and westward.

Though the words spoken during a political campaign addressed the issues of the Chickasaws and their former slaves, time would eventually allow their indifference to become official policy and a people were forever cut off from the nation that was part of their family history.

But today the effort begins to not only tell the story, but to find the original family story from which the family emerged. Thankfully, there are records that remain.

The challenge is to identify them, share them and embrace the spirit of survival and resilience of the ancestors.