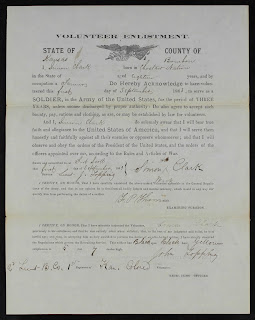 From the Service Record of Simon Clark, from the Choctaw Nation and who served in the 83rd US Colored Infantry

The Civil War in Indian Territory was complicated. There were many critical battles fought in the Territory, and like other parts of the south, among the issues that prevailed was the issue of black chattel slavery. Close to 10,000 slaves were held in the Territory by 1860, and many of those men who were enslaved enlisted in the Union Army when opportunity presented itself.

It is known that in early 1861, many people from the Creek and Cherokee Nations fled northward into Kansas. By 1862 several black men had joined the Union Army as part of the 1st and 2nd Kansas Colored Infantries. Those regiments would later be re-designated as the 79th and 83rd US Colored Infantries, respectively.  Many of the men in those two regiments were slaves from Indian Territory. Most were known to be either formerly Creek or Cherokee slaves.

However, little is known of the Choctaw & Chickasaw ex-slaves who also enlisted. They were far fewer in number, partly because they were geographically not as close to Kansas where they could have freely enlisted. There were a few who did however, manage to escape to Kansas and to join  the Union Army and join the same regiments as their comrades from the Creek and Cherokee Nations. But there were also a few Choctaw and Chickasaw slaves who had access to nearby Arkansas. When recruitment was at its heaviest in Ft. Smith, a few of those men from Indian Territory also managed to get across the border and enlist. They  joined the 11th US Colored or the 54th US Colored from Arkansas.

A friend and colleague Terry Ligon, host of the Black and Red Journal blog recently began posting a few names of Choctaw and Chickasaw black men, who were Civil War soldiers several days ago. He started sharing these names in the Facebook group Oklahoma/Indian Territory Reader. Now I have seen a few Choctaw and Chickasaw Freedmen who were Union soldiers, but I decided to take a closer look to see if there were additional names that could be found. Although they were scarce they were still there and I am glad to share a few that have been found from the Choctaw and Chickasaw Nation. 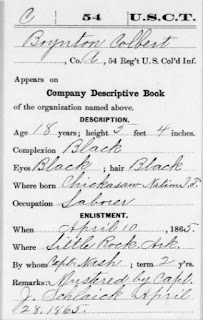 Boynton Colbert of the 54th US Colored, was later known as Bynum Colbert,
who also served as a US Deputy Marshal under Judge Isaac C. Parker.
Source: NARA M2000. Compiled military service records of volunteer Union soldiers who served with the U.S. Colored Troops (USCT): Infantry Organizations, 47th through 55th. 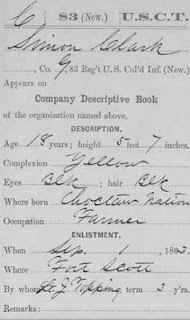 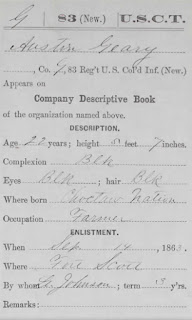 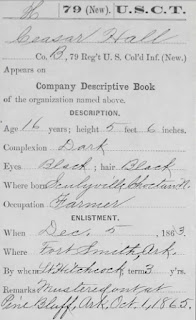 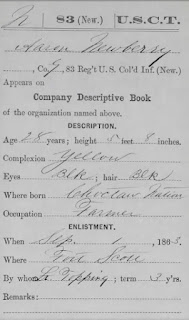 (As more men from these two nations are identified, their names will also be shared.)

Do you have any information on where Boynton /Bynum Colbert, Deputy US Marshal, was buried? Thanks.