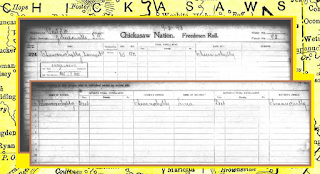 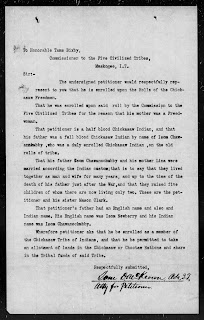 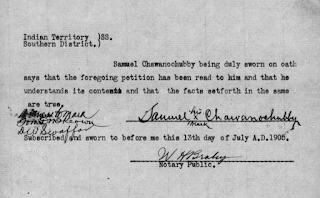 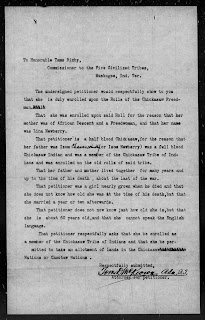 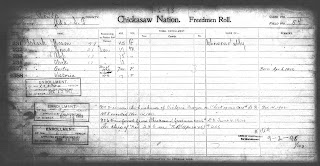 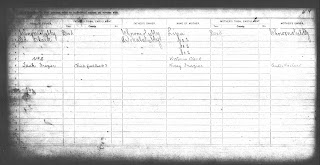 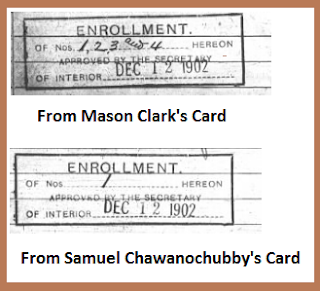 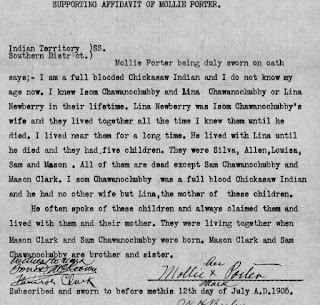 Were the couple married? There was a Chickasaw law against marrying a slave.

According to one of the witnesses they were married according to "Chickasaw tradition."

I believe the couple was not legally married but lived together as husband and wife and was known in the community as such. No testimony from the husband or his relatives saying he actually married a slave woman, therefore the family was placed on the freedmen roll.

Placement on the Freedmen Roll had nothing to do with marital status. These are the children, directly related to their father, a Chickasaw by Blood. They were the children of their father and mother. The Dawes Commission saw their African blood, in spite of their life as Chickasaws, including limited English and Chickasaw being their native tongue. In this case as with many cases, race trumps everything especially if there is presence of the African race in the line. That somehow appears to be "justification" for a different kind of treatment. They were clearly Chickasaw in culture lifestyle and connection to their parents. For Mason not to have spoken English, then her mother a Chickasaw slave also did not speak English but she spoke the language of her enslavers. It was her mother tongue, and their mother tongue. And being on the same historical landscape, history cannot deny who they were. It does make an interesting study as do many such cases. The ruling of the southern men who comprised the Dawes Commission prevailed, nevertheless. Descendants of the Chawanochubbys and Clarks will find their history to be a fascinating one, indeed.

WOW! Thank you so much for posting this information. I was able to add more people to my family tree. I was stuck on Mason as was unable to find additional information until now. I am truly grateful!

Mollie Porter was my great-great-great Grandmother. How amazing!!