As stated in the previous article, about Freedman enrollment, the persons who began the Dawes enrollment when the commissioners came to the community were often persons who were persons of standing in the local community.

The case of William Alexander is interesting, because he was a rather young man at the time of the Dawes Commission. He applied for enrollment for himself and family in 1898. He is said to be the son of Cornelius Pickens, but he is actually the son of Cornelius Alexander.  His Dawes interview reveals only a few details about his life, and like many Chickasaw Freedmen, he has one of those interviews that were shortened by the commission.

In August of 1898, twelve men met at Dawes Academy, and that meeting consisted of William Alexander. The Chickasaw Freedmen had hired two attorneys, Robert B. Belt, and Joseph P. Mullen for their role ins securing benefits for them, under the Curtis Act.

In addition, William Alexander was also connected to another prominent family among Chickasaw Freedmen. His mother was Margaret Wilson, who was also the mother of Bettie Ligon, the lead litigant in a major suit made by Freedmen known as Equity Case 7071. Clearly this was a small community and all of the Freedmen interacted with each other, fighting for years to secure the few rights that they were able to obtain.

The Dawes Commission set up the enrollment process in Stonewall on September 1, 1898 and first to be interviewed was William Alexander. His participation in the committee of active Chickasaw Freedmen, and his known status as one of the Freedmen leaders put him at the front of the line of people to be interviewed. 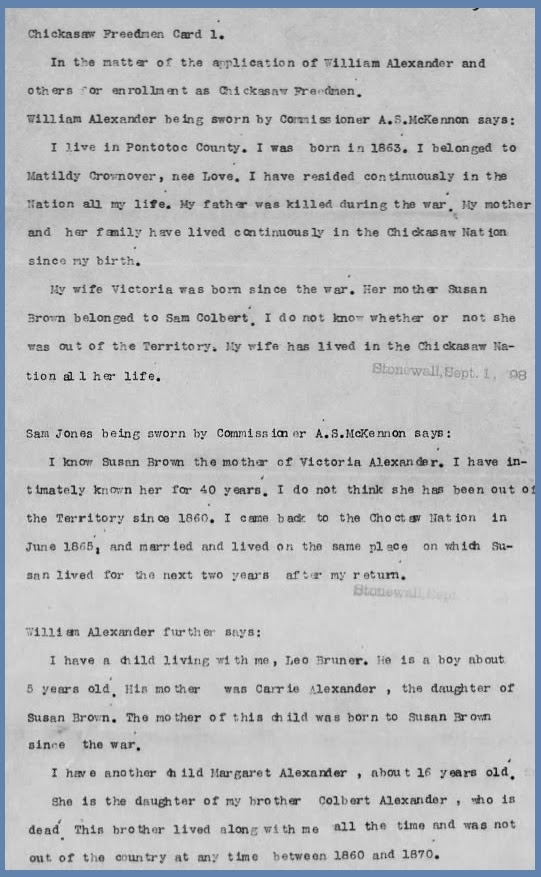 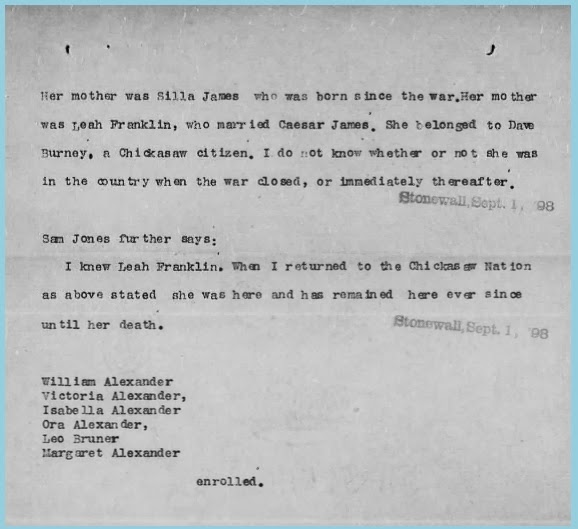 Although many of the Chickasaw Freedmen interviews were evaluated and basically summarized interviews, some significant data can be extracted from the files, including data pertaining to the parents of everyone in the family group that was enrolled.

Looking at the data provided by the Enrollment Card and the Application jacket, can more be learned? Yes, more can be learned. William Alexander pointed out that his father died in the Civil War. Was his father possibly a Civil War veteran? Only research will tell, but records of the Indian Home Guard, as well as the US Colored Troops might reveal more. Also noting that this first interview was conducted in Stonewall, a study of other interviews made at the same date and time would be worthwhile. And knowing his relationship to other prominent Chickasaw Freedmen to glean more about the entire community. the records of those known leaders of the Choctaw & Chickasaw Freedmen Association will undoubtedly unlock more stories and reflect more clearly the resilience of the community of Freedmen in Chickasaw country as well as more insights into the life of the man William Alexander, the first Freedman to be enrolled from his tribe.

What can be learned, you responded yes...that is the So What principle in action! Great write-up!

I have found a chickasaw slave owner there ended up being my ancestor, he only owned 3 slaves and they ended up being his black wife and 2 sons. one son died in the war and the other married a choctaw woman and became a widower with children. He fought to get the children their allotments, land and money, but refused to get his own because his father taught him to be proud. Be cause of what Tom did for his children after the death of their mother he solidified choctaw heritage for me and my kids today. BUT because he and his father refused to go get enumerated we have lost the benefits of Chickasaw nation. Chickiasaw told me if they are not on Dawes they will not honor the bloodline. even though they have slave schedules and affidavits.