The newly digitized in color images have been a pleasure to explore ever since they were announced when Ancestry partnered to bring more Oklahoma records to subscribers. Among the many new records now digitized, are some excellent resources for family history. Cherokee Freedmen, like descendants of other tribal Freedmen will be particularly thrilled to find the original color images of Dawes Cards. 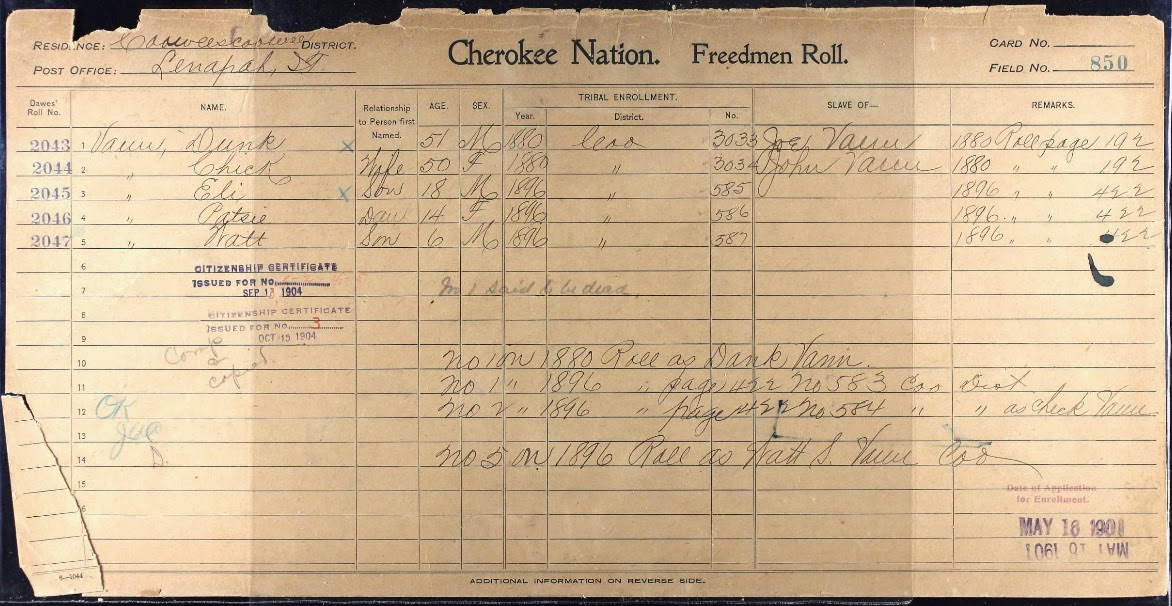 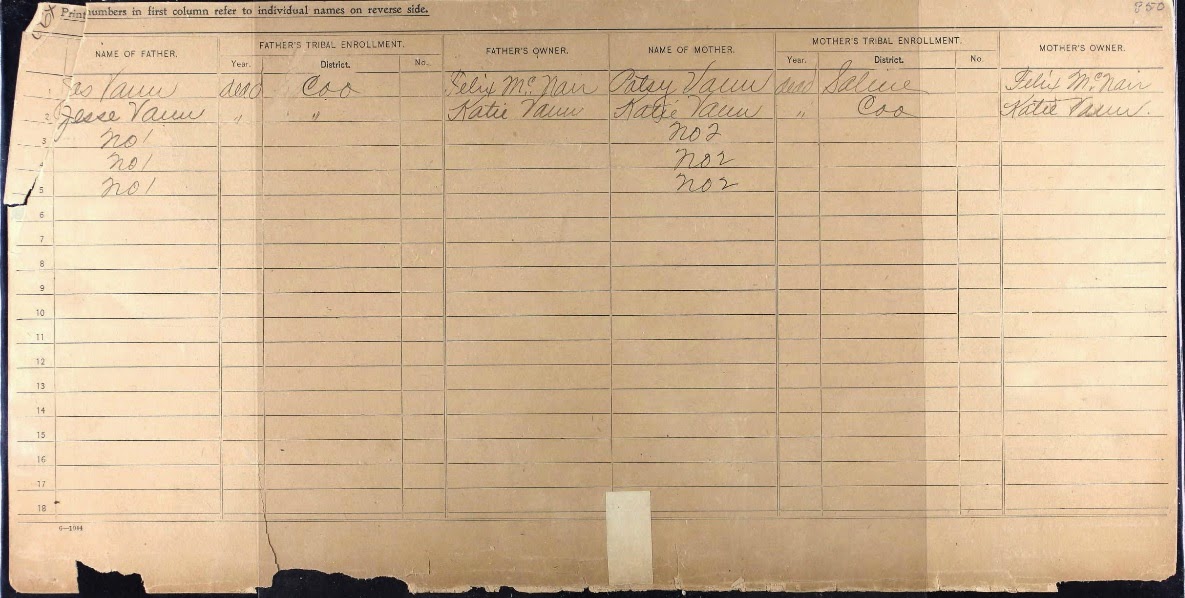 I am happy to point out  that there are additional resources for family history research for Cherokee Freedmen. Some reside on subscription sites while others reside on free sites. As many of these resources as possible should be used to construct the family history. Most are described for you here.

The Wallace Roll
This roll was conducted between 1890 and 1896, and it was compiled by John Wallace, who was a Special Agent. The roll was later rejected by the tribe and was not used for enrollment when the Dawes Commission began several years later. However, the roll still exists and it resides on the National Arhives website in its entirety. 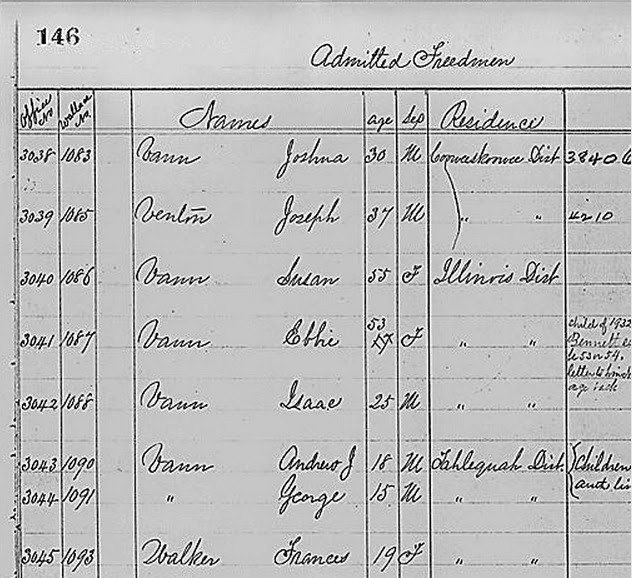 Image of a page from the Wallace Roll

A Break for the 1890 Census
Most genealogists are aware of the lack of records reflecting the 1890 census year. Oklahoma researchers, and Indian Territory researchers in particular have many records to explore reflecting the years between 1890 and 1900 that this missing census year is not an issue for genealogists with Oklahoma ancestors. Ancestry has captured many of these records as well as other free sites, and they should all be explored. The better news is that the collections now available include hundreds of pages of census that even preceded the Dawes Rolls and the Wallace Rolls.

Cherokee Census of 1896
In this particular census, Cherokee Freedmen were enumerated at the end of each district section. In the image below the "Adopted" Freedmen appear in the Tahlequah District, on final pages after the Cherokees "by blood" were enumerated. (This comes from the National Archives in Ft. Worth and has the reference number of 7RA-19). 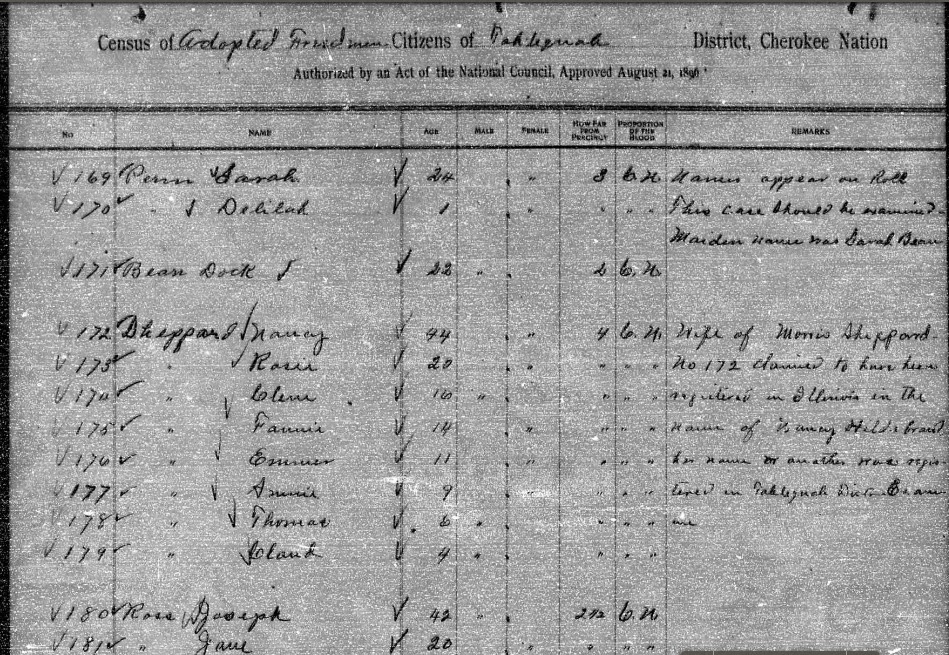 1893 Cherokee Census
Many researchers are not aware that in 1893 another census was conducted in the Cherokee Nation. And like later records they also had pages reflecting Freedmen in each of the Districts of the Nation. 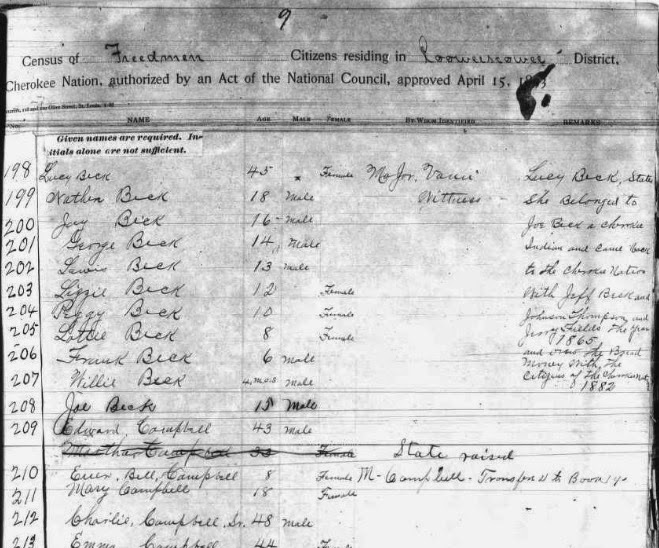 In some cases notes were made in the "remarks" column to explain a bit of additional data about the family enumerated. 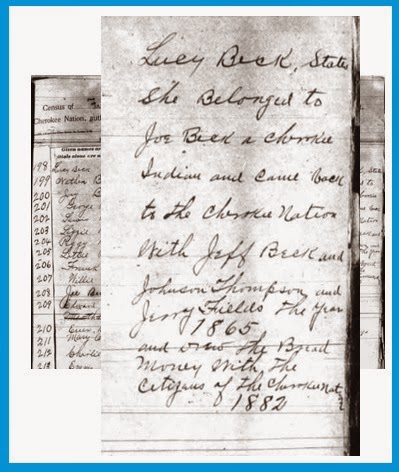 (Notes made about family enumerated on census page.)

The 1890 Cherokee Census
During this census year an enumeration of residents was also conducted in Indian Territory.  There are 6 reels of microfilm for this record set, and all are digitized on Ancestry. 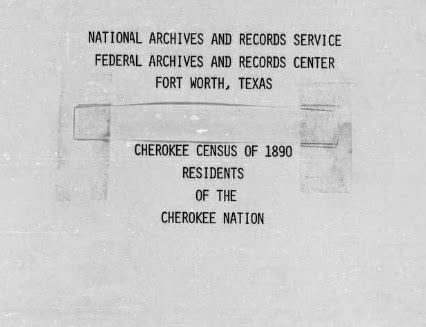 Within this short collection are six different census schedules.

Sample page from Schedule 1: This page reflects Cherokee Freedmen. It clearly states their entitlement to citizenship.

1890 Cherokee Nation Census 1890 Schedule 1
This second image reflects a closer view of the names listed on the document. 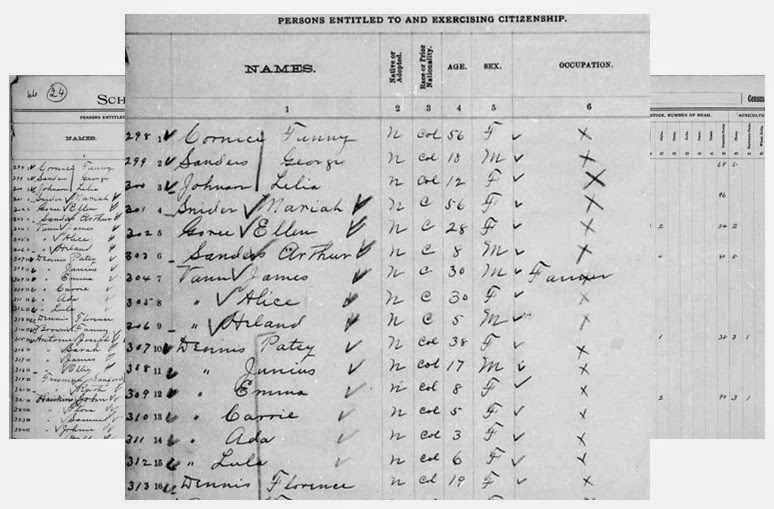 Many persons who were considered to be non-citizens were also captured in the census of 1890, on Schedule 6. The heading clearly indicated their non-Cherokee status. This particular census year is interesting, because one should note that in the year before, in 1889 the first Oklahoma Land Rush occurred. As a result many non-Cherokees were present even in the Cherokee Nation itself and were simply enumerated as "American"  and in latter pages as "white" under the column for "Race or Nationality"

Cherokee Freedmen were not listed on this non-Cherokee census schedule.

It is helpful when using census records of any source to pay close attention the instructions that census takers were given. The descriptions for each of the schedules for this 1890 Cherokee Nation census are spelled out clearly. 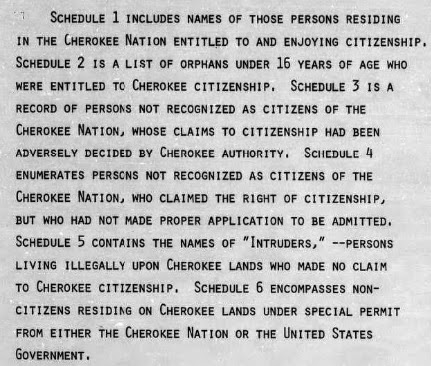 Land Allotment Applications
A final suggestion for Indian Territory research is to look at the records for Freedmen Land allotment applications. These are fully digitized images and they reflect the actual location of the original land allotment of the family members that were approved on the Dawes Rolls. All of these pages which number over a million, are located on the Family Search website and can be accessed free of charge. 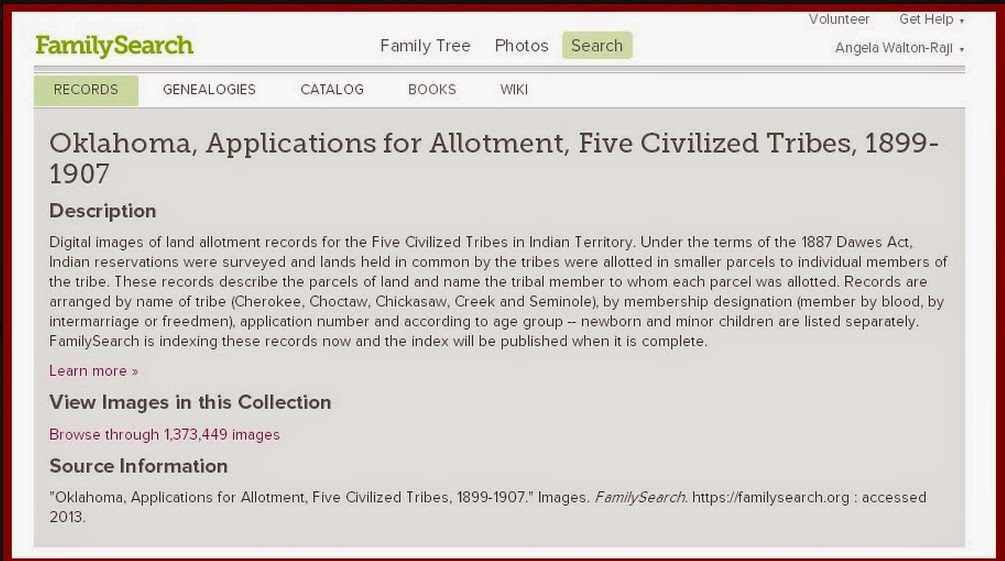 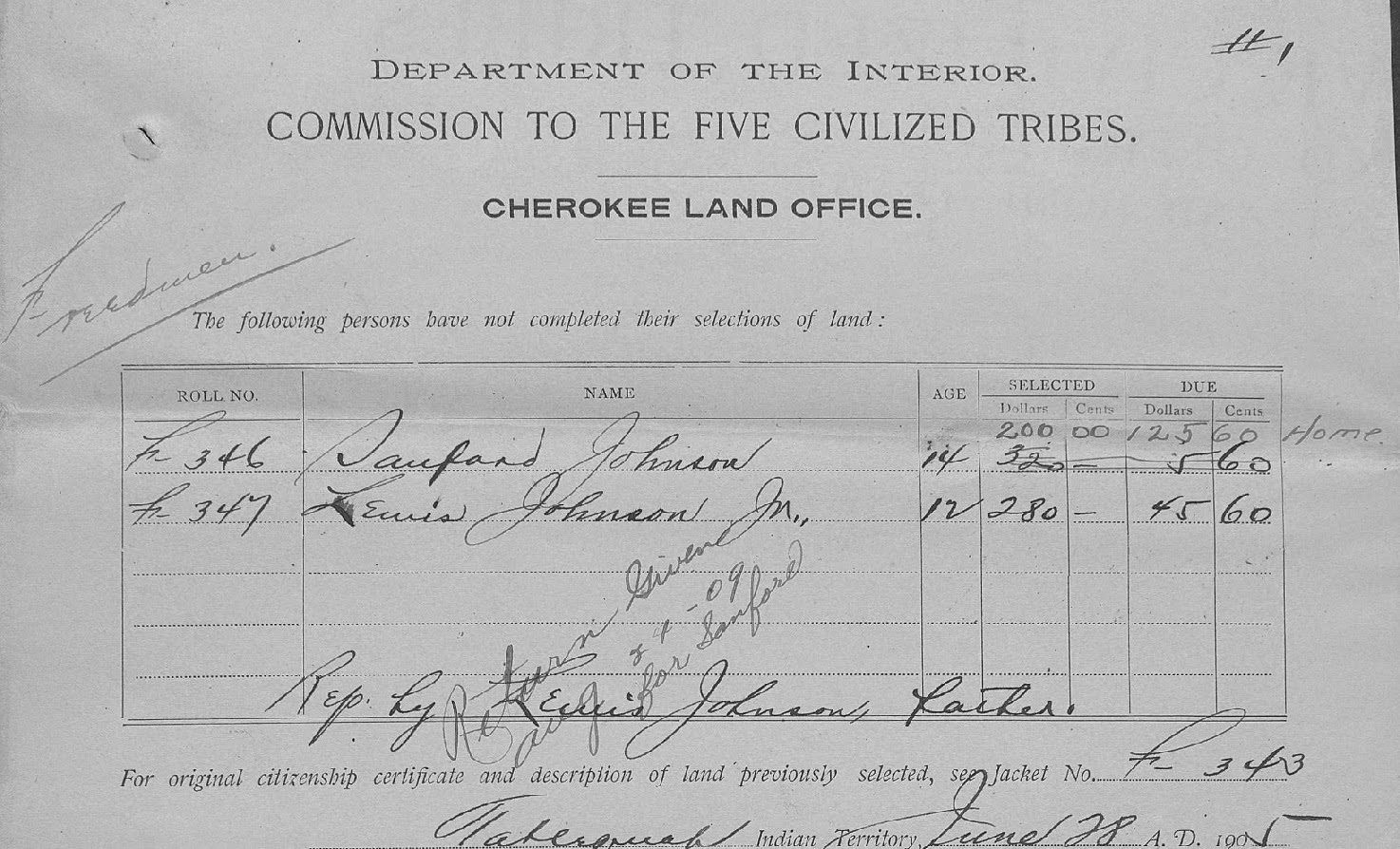 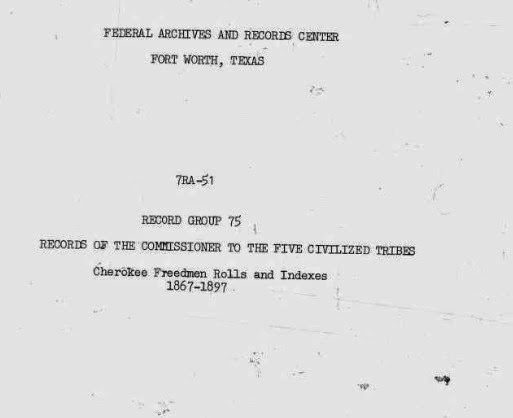 Within that collection, one will find the 1880 Cherokee Freedmen Census. 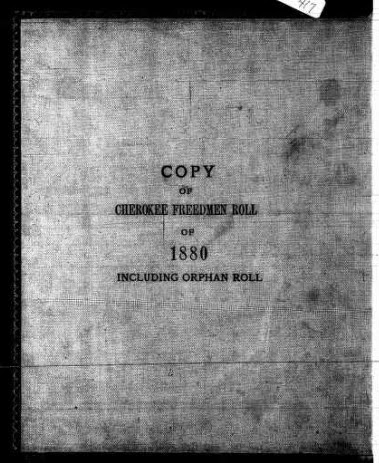 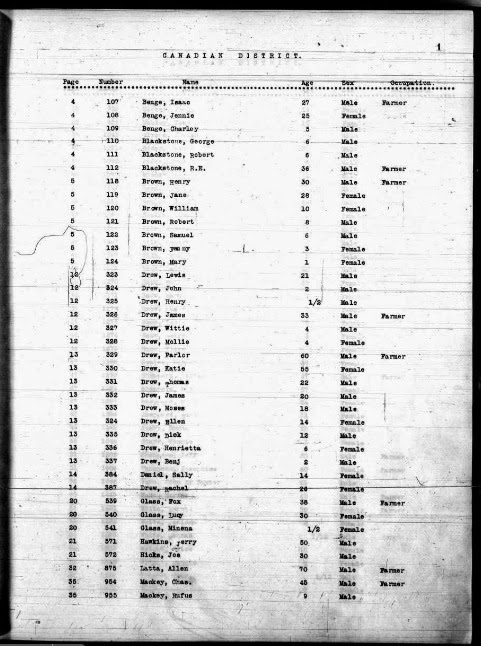 Hopefully these sample documents will provide more information for Cherokee Freedmen historical researchers seeking to learn more of the people in the Freedmen communities and who they were, and how they lived. Using these records will assist many historians, and genealogists, and they will thereby aid in telling the story more effectively for generations to come.
Posted by Angela Y. Walton-Raji at 6:30 PM

To search all Dawes applicants- Doubtful, rejected, and those on the rolls use this website:
http://www.ancestrypaths.com/five-civilized-tribes/

Go to accessgenealogy to obtain the census card number and the roll number.

Access genealogy site often has ommisions. A more useful site is the one produced by the Oklahoma Historical Society--which is a free database for the Dawes records:
http://www.okhistory.org/research/dawes