Cherokee Freedmen Voting, Since the 1800s

"I cast my first vote for chief of this Nation in August 1895, but the first vote that I cast was cast at the election of the Mayor of Tahlequah in the spring on 1895". ~ Ave Vann son of Clora and Joe Turk Vann.

An interesting post today was shared in social media from a recent article from the Cherokee Phoenix pertaining to the upcoming elections. A letter from the BIA acting Regional Director was written earlier in the month declining to approve LA-04-14, an act to amend the election code of the tribe. A recent phone call between Cherokee Nation representatives and the Department of the Interior addressed the intentions of the tribe to comply with an order from 2011. That particular order from September 2011 came from the United States District Court.
According to the Phoenix article "That order was set to ensure all Freedmen voters would have the opportunity to participate in the election of the Principal Chief as well as give access to and have rights and benefits the same as all Cherokee Nation citizens." I personally found this to be especially interesting, because this week, while engaging in research for a client, from a Civil War Pension file from the 1890s I found a unexpected reference to a vote in the Cherokee Freedman, by the voter himself. 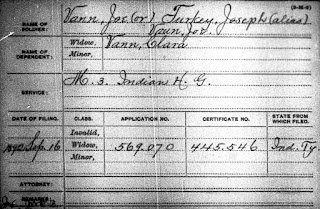 Civil War General Index to Pensions 1864-1934, Washington, D.C.
National Archives and Records Administration  T288 546 rolls
A question arose about his age. To respond to the question of age he pointed out that he met the age requirement in the Cherokee Nation as a voter was 18 and that he was old enough to have cast a vote in recent elections. 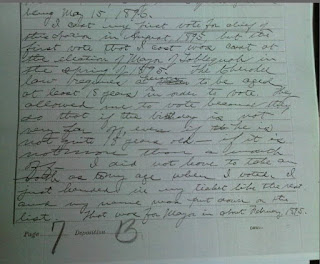 Ave Vann's statement about casting his vote stood out and caught my attention, especially since the issue of the upcoming vote and the rights of Cherokee Freedmen is still an issue. (Interestingly the soldier Joe "Turk" Vann was the son of as well as the slave of one of the old Vanns of Tahlequah, including the family of the elder Ave Vann well known in the tribe at that time. And as the file reflected, his own son also bore the same name.)

It is often debated even today by many, in the nation that Cherokee Freedmen had no part in the nation, and never participated in the affairs of the nation, yet, here was a file of a man who served with one of the few Union regiments from Indian Territory. (Most Cherokee regiments were, in fact southern sympathizers and fought with the Confederates.) The son of the soldier in this case clearly pointed out his own participation in his nation as a citizen and as a voter. And as he pointed out that when he was of voting age his voting was never challenged by the Cherokee Nation. "I just handed in my ticket like the rest, and my name was put down on the list.

As issues of the upcoming elections still address the rights of Freedmen, the pages of history reflect that the Freedmen were there, living under the laws, and participating in the electoral process.

Hopefully the historical presence of those once enslaved in the Cherokee Nation will be acknowledged, and will not be wiped out by malicious expulsion votes, nor maligned by the linguistic calisthenics thrown by some individuals labeling Cherokee Freedmen descendants as  "non-Indian Freedmen".  Carefully, they never referred to Freedmen descendants as called "non-Cherokee" Freedmen, because they can't dispute that in fact, that is what they truly were.
It is hoped that those of all of the respective nations from the pre-statehood Territory, with ties to the nations of their ancestors' birth, will all be recognized for their human presence, and contribution to the tribes, by their labor, their service and their lives.
Posted by Angela Y. Walton-Raji at 7:43 PM