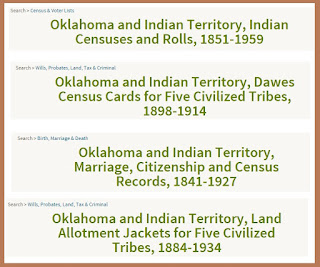 In the fall of 2014 a special partnership between the Oklahoma Historical Society and Ancestry was announced. It was announced that some unique collections and holdings at OHS had been digitized by Ancestry, and they were now being made available to the public. One feature that many Oklahoma researchers learned right away were the images of the Dawes Cards, in the original color. This was a welcomed treat, because of the differences that the color images present.

However, it is clearly understood that one record set does not present the entire story and that there are many more records for those who have Indian Territory history as an interest. Thankfully the partnership has brought to life some amazing records previously unavailable outside of Oklahoma. These records are no in themselves "new". They are "new" in terms of their availability to the public more easily and are "new" to a wider audience.

Now, it is widely known by many that there are thousands of pages with images of records created decades before the Dawes Rolls, and for the tenacious researcher, they also should be examined in order to tell more of the ancestral story. These "new" records were made years before the Dawes Rolls, and the hold incredible information for researchers.

I have recently written two articles recently reflecting some of my own finds among these new records, and those articles can be read my Choctaw Freedmen Blog.

And since last fall's announcement, it has taken several months for me to analyze the actual content of the various databases and to note the differences between them. In addition, I have also found my own way of locating them quickly, and I am happy to share what I have been able to learn about them with my readers.

The four databases listed above are massive, and each one holds a wealth of data, that I have outlined with screenshot images below.

I have personally found, that the quickest way to get to them is to go outside of Ancestry to get back in. I make quick Google search with the following words: Ancestry, Oklahoma and Indian Territory.

By typing these words, this will bring all four of the databases to one page on the google search. See the following screen shot: 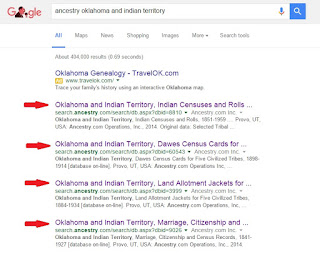 When on the Ancestry site, simply click on the desired collection and begin the search. It is important however to fully understand what each database holds, so I have inserted some screen shots from the site to illustrate the contents of the database.

When on Ancestry, when clicking on the "Browse" Button the holdings appear like the illustration from the screenshot below. 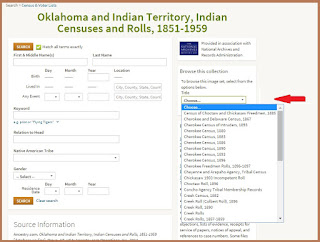 The following screenshot reflects is a list of all of the holdings found in that database.

This is where the Dawes cards, often called Enrollment Cards can be found. NOTE---there is another category on Ancestry that says Enrollment cards, but it is really an INDEX to the Enrollment Cards, and not the cards themselves. To see the actual Dawes Card--this database is the proper index to find them.

The following screenshot reflects selections that consist of the following: 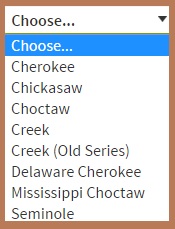 Included in these records: 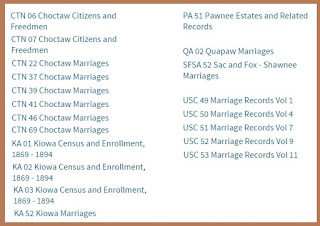 The choices in this collection are seen in this screenshot image: 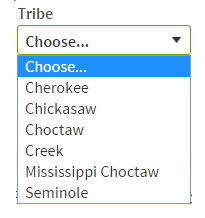 Hopefully this explanation of some of these new databases will assist many Indian Territory researchers in exploring their ancestral story. For many years, the focus has been exclusively on one set of records, but now as a result of the partnership and this recently digitized set of records, options are available for researchers, to explore families more easily and more efficiently.

In a future post, I shall present examples of the data to be found in some of the individual collections.

You are AWESOME, Angela! Thanks for all that you do.

Wonderful guide to these new records. Thank you for this labor of love!