In The Press: Loans to Creek Freedmen Farmers

An interesting advertisement was noticed in the Muskogee Cimeter that appeared regularly in that publication in the early part of the 20th century. The ad ran in the classified section of this African American newspaper that operated in Muskogee.

The advertisement appeared before Oklahoma statehood, which occurred in 1907, and it ran while the well known Dawes Commission was still operating. This commission was created to interview citizens of the Five Civilized Tribes, and to determine who was eligible among the citizens of each tribe, for land allotments. The allotment process operated officially between 1898-1914, with the last several years focusing on adding children who were born after 1906 and who were to be added before the rolls closed.

Among the many people eligible for allotments of land, were Creek Freedmen, in addition to the Indian Tribal Freedmen from other former slave holding tribes as well. The allotment of land gave different amounts of land to the citizens of the nations, with some tribes treating Freedmen differently as was also common in many places in the southern part of the United States. With Creek Freedmen however, it is generally noted that Creek Freedmen receive 160 acres as did others designated as citizens of the nation.

What caught my attention was that an Abstract company based in Muskogee, placed an advertisement in a black newspaper about their services and that farm loans were available specifically for them. It was noticed that Creek Freedmen were mentioned specifically among those who may have been eligible for loans, if they were already farming on their land.

Now it is well known that in the years after statehood, many citizens of the various tribes lost  their land due to actions from land grafters, and others questionable parties offering "assistance" to the new land owners. Within a short time those land owners would later find that they had signed away their own title to their land, unintentionally. It is not known who many were, and how many companies or single individuals were part of the effort to seize land from tribal citizens.

Historians, W. David Baird, and Daniel Glover, addressed the issue of the loss of land in Creek country. Their work, Oklahoma: A History, published by the University of Oklahoma Press, pointed out that the presence of land sharks and land grafters was a problem during those years. In the years while the Dawes process was unfolding, there were people in place offering services to Indian tribal citizens and often within a short time, people had unknowingly signed away their rights to their own land. 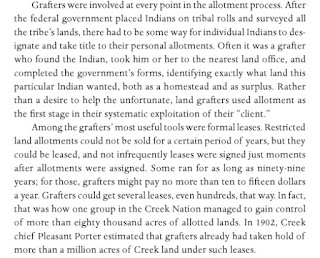 Studying the advertisement made many questions come to my mind.
Were loans made to unsuspecting land owners?
Were the terms of the loans made among some that may have allowed the leasing of lands?
Were some of the loans made including a clause of transfer of ownership to the lenders in some way?

The fact that Creek Freedmen were invited to apply for loans through a company whose purpose was determining land titles makes one ask questions. Allotments made to citizens of the tribes should have been clear from the beginning, and the need for an abstract company does seem unusual.

There are no quick answers to these questions, and there is nothing to indicate clearly what happened and how many transactions were ever made with Freedmen or other citizens of the Creek Nation. Very little is known about the company making loans to Creek Freedmen as reflected in the advertisement shown above. It is noted however, that this was an abstract company and not a bank or savings and loan, or a recognized financial institution.

So why does the ad appear in this publication pointing out that Creek Freedmen were particularly eligible for loans? Possibly because the newspaper's readership may have consisted of a large number of Creek Freedmen who were new land owners in Muskogee, Summit, Taft, Okmulgee and other parts of the Creek Nation. And possibly the readers were among those who were now living and working upon their allotted lands.

The company cited in the above ad was called the Midland Abstract Company, and it was operated by James L. Lombard, Chas. H. Lombard, and D. G. Wilson. A search from the 1910 and 1900 census years did not reflect these men, so it is not known how long the company may have existed. It is hoped that the company was a legitimate one serving the community. And hopefully their services offered by Midland Abstract Company were the standard services made by traditional abstract companies, and that individuals who sought loans, did not lose their land.

(This article is part of a series of articles devoted on this blog to Indian Territory Freedmen. Many newspapers throughout the regions frequently carried stories about the Indian Tribal Freedmen (their formerly enslaved families and descendants of those families). These publications can be useful tools for researchers seeking more of the greater story. This is a companion series to Gems from the Black Press, found on another blog, My Ancestor's Name.)
Posted by Angela Y. Walton-Raji at 4:26 PM

Thank you for sharing this information. It has helped me to know more about
real estate blogs to follow