The Johnson family of Benge, Indian Territory (now Muldrow, Oklahoma) is a family of Cherokee Freedmen rooted in the Cherokee Nation, in what is now the old Shady Grove Community. This family was descended from Mose Johnson, an early arrival in the Territory.

During the years of the Dawes Commission, Lewis Johnson who was then the head of the Johnson clan, appeared in front of the commission in 1901. The family lived in the Sequoyah District of the Cherokee Nation, (now Sequoyah County). Lewis Johnson was 50 years old at the time, and at one time he was enslaved by Cherokee Ben Johnson.

He appeared for the purposes of enrolling himself and his sons, James, Sanford, and Lewis Jr. as well as his daughter Louella.

The mother of Lewis Johnson's first 3 children was Hester Pope Johnson, and the mother of his last child was Frances Smiley Gunter Johnson his second wife. He pointed out when asked, that both women were non-citizens of the tribe, and it was he who was the Cherokee citizen making the application on behalf of the family.


The Dawes Application PacketThis interview with Lewis Johnson was a straight forward one and their case was without complication. The head of the family Lewis was asked about his past and whether he was a citizen. Of interest to the commissioner was where he was during the Civil War Conflict, and when he returned to the Cherokee Nation after the war. This was an important question, because for many Freedmen, if they returned after 1866 there may have been problems and that was often a line of questioning for Cherokee Freedmen. 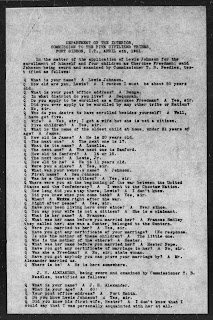 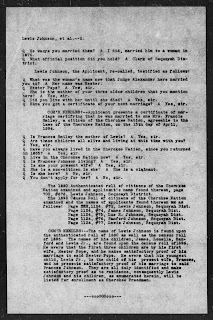 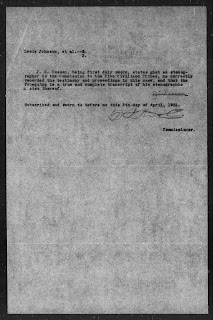 Although the wife was not applying for citizenship there was strong interest in the marriage between Lewis and first wife, Hester.  Because J. H. Alexander, was in the vicinity of the hearings he was able to provide a marriage record, hand written, and he recalled performing the marriage several years earlier. He indicated that he personally knew Lewis Johnson, and that he did perform the marriage between Lewis Johnson and Hester Pope. At time of the marriage, J. H. Alexander was serving as clerk of the Sequoyah District, of the Cherokee Nation.

There does not appear to have been any doubt about J. H. Alexander's statement, therefore the document was accepted as an official certificate. 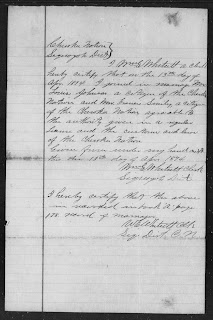 The result was that the family was enrolled without complication.

As enrolled Cherokees, each member of the family was to receive a parcel of land. The Land Allotment jackets reveal more detail about the family and their selection of land. Apparently Lewis Johnson had received land through this process, but he chose to relinquish it, because he had already selected land and was making improvements upon the parcel of land where he had been residing. This was reflected in a second interview. (This interview was found among the records of the Land Allotment process, also on Ancestry.) 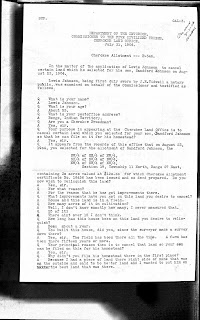 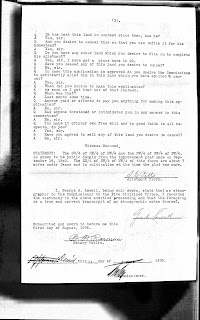 At the end of the process each land owner received a letter similar to this one sent to Sanford Johnson, one of Lewis's sons. 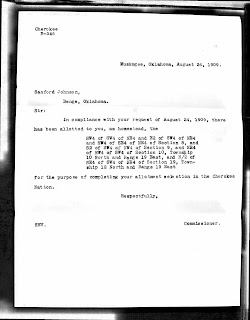 It might generally be assumed that there is not much more that can be learned about the Johnson family. However, years ago, it was pointed out by Doug Johnson, a descendant of Lewis Johnson, that his ancestor, Mose Johnson had an interesting headstone and it looked as if it was a military stone. After that conversatin, he went to visit the cemetery, and sure enough Mose Johnson did have an interesting headstone.  He shared the information from the stone with me, and it turns out that Mose Johnson, (the father of Lewis Johnson) was a Union Army Civil War soldier. Having been born enslaved--he was a true freedom fighter.

Upon learning of his service, I took a look to see what could be learned about him. It turns out that he served in the 83rd US Colored Infantry, having enlisted in Ft. Scott, Kansas. After enlisting, he served as a nurse in the medical unit of the 2nd Kansas Colored, the original name of the regiment.

His Civil War service is noted and most interestingly, there is additional information to be found on the Johnson family, because Moses Johnson, (known as Mose) also left behind a widow after his death and she filed for and received a Civil War widow's pension. 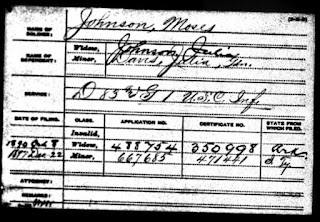 The family receive payments from the Civil War service of Moses Johnson, in the 83rd US Colored infantry, and the family survived living on the family land allotments for several decades.

Much more to the family's history can be examined and the story deserves to be told. Mose Johnson's name is also inscribed on the wall of Civil War soldiers at the Civil War African American Memorial in Washington DC.

This Cherokee Freedman family has a rich legacy literally from that of people enslaved, to people empowered. They were freedom fighters, survivors in freedom, and the family still strives to continue its legacy.

* * * * * * * * * *
(This is the 11th article in a series devoted to sharing histories and stories
of families once held as slaves in Indian Territory, now known as Oklahoma.
The focus is on the Freedmen of the Five Civilized Tribes, are part of a project goal of documenting 52 Families in 52 weeks.)