Many people assume that ALL Indian tribal freedmen were enslaved or children of enslaved people. There were people of African ancestry who were free people, living within their tribe, and those whose mother was also free born, as well. The case of Philip and Elzora Lewis is an interesting example.

This family resided in Muskogee, Indian Territory. Both were born about 1869 long after the war had ended, and thus were not born enslaved. Philip's father belonged to Arkansas town, and there is no indication that his father had been enslaved. His mother was enslaved by Roly McIntosh a well known name in Creek history. But since his mother had been enslaved, one might assume that is why he was put on the Freedmen roll. Elzora's father was a Choctaw Freedman, which would have had no bearing at all on her status as a Creek. Her mother Bettie had been a "free born" woman, and thus should have made her eligible to be considered or treated differently, and not as a woman once enslaved. Sadly the concept of treating those once enslaved was so easily acceptable as being something acceptable, which is as it is still among the tribes today.

Of course the race-based policies of the Dawes Commission, as well as racially based policies that the tribes continue to embrace, put Elzora also on the Dawes roll as "Freedman" even though her mother was a free woman living as a Creek. Although it is often said that a child follows the status of the mother, clearly Elzora's mother was Creek, lived as a Creek, belonged to a Creek town. But---as is evidenced---she was classified as a Creek Freedman. The status of her mother is reflected on the second image--the reverse side of the enrollment card. 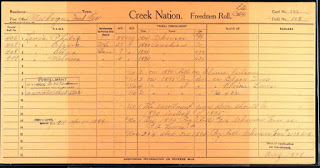 Creek Freedman Card #105
The National Archives at Ft Worth; Ft Worth, Texas, USA; 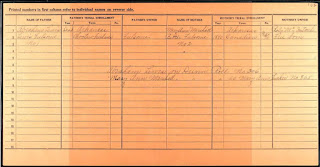 (Source same as above)

Unfortunately, there is no Dawes Interview packet for the Lewis family. Within the Creek nation, many of the Dawes interviews are "missing" and simply not found among the microfilmed records. However, thankfully there is much more to learn about the Lewis family, and in fact, a far better interview with Elzora is found in the Western History Collection at the University of Oklahoma.

In January of 1937, Elzora was interviewed by the team working for the Indian Pioneer History project. Those interviews are part of the Western History Collection of the University of Oklahoma. And thankfully they are also digitized and online. Elzora's story is found there among them. Because she was able to speak freely, Elzora's interview was wonderfully rich with data about her family and far greater than the Dawes interview, wherever it may be, would contain.

Her life story and that of her parents is an amazing one. Her mother was the daughter of a Rolla Scott, a Creek who came to the Territory quite early. Elzora even had information about her father's parents--her grandparents, some of whom were reluctant to remove to the Territory. 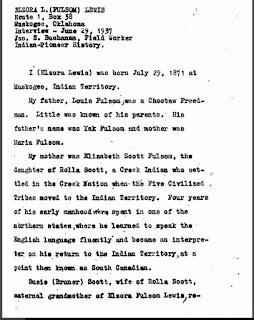 Elzora points out that she attended a "Baptist Missionary School located on Agency Hill, on Honor Heights in Muskogee.  People familiar with Honor Heights know that this was the site of the former Evangel Mission school for Creek children, and that this building is now known as the Five Civilized Tribes Museum. 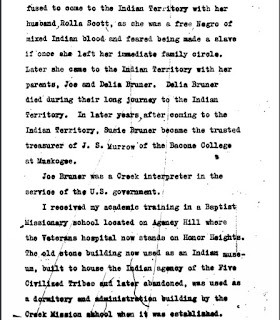 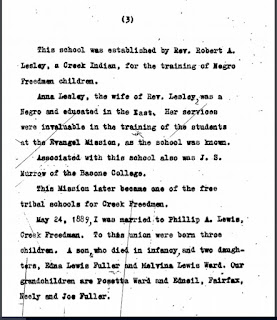 In her interview, we learn more about her family, because Elzora mentioned not only her children, but also her grandchildren who would have still been living in Muskogee at the time. It is hoped that their descendants are now aware of their rich history that has been well documented from multiple sources.

From the Choctaw Nation, but also living the Creek nation, was Elzora's father Louis Folsom. He was admitted by the commission as a Choctaw Freedman. His own card can be found on Choctaw Freedman Card #466. His parents were Yap Colbert and Lydia Colbert. His parents were enslaved by Pittman Colbert, whereas he himself had been enslaved by Sampson Folsom. (He also has four additional Creek Freekmen children who are listed on Creek Freedman Card #360 on Field Card Number 370. They all reside in Checotah, in the Chambers household.) 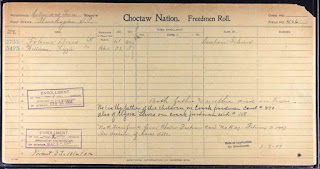 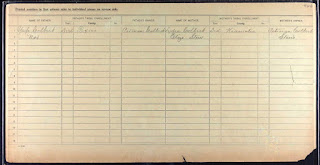 (Source: Same as image above)

Within Louis Folsom's Dawes packet are several interesting pages. There is an interview with him, and also an interview with one of his grown children, as well. His own interview was not complicated and a simple forthright one that cleared him through the Dawes enrollment process. 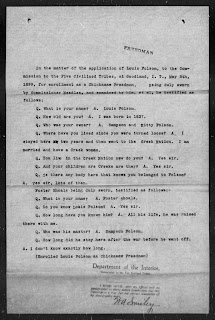 Another interview found in the file is with an adult daughter Lizzie. This daughter would have been a half-sister to Elzora Lewis. She was questioned about her father, and though she could not answer some of the questions about him, she was still enrolled on the same card with him. Also it comes out during Lizzie's interview that she resided in Goodland, and not in the same area with her father, nor with her half sister Elzora. 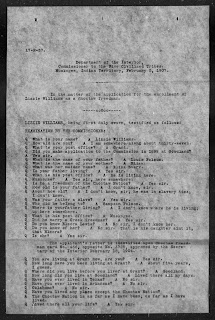 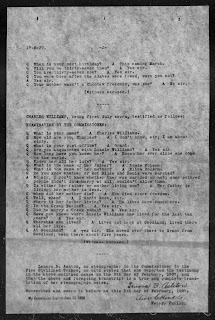 
An interesting hand-written note also appears in the Dawes enrollment packet verifying the history of Louis Folsom, Elzora's father. Individuals who knew him since birth testified that he was indeed born where he stated that he was and that he had truly lived in the community stated. It should be pointed out that at the time of the Dawes interview, Louis Folsom was in his sixties, which makes these hand-written sworn statements even more amazing and important. In that letter, the three people quoted were able to provide the exact birthdate for Louis Folsom, Elzora Lewis's father. He was born in 1837 and those who signed the letter knew him from his earliest years. 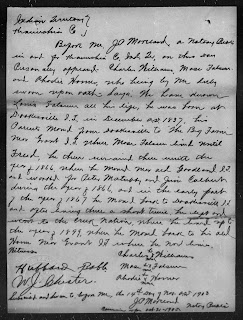 The family history of Elzora Lewis's family is a rich one, and it shows how inter-connected many of the Freedmen families were. Their often overlapped with citizens of other tribes, and they were aware of their histories and were able to prove who they were. Elzora and her family were strongly Creek in culture, lifestyle and identity. However, her father and half-siblings were Choctaw Freedmen.

From her interview with the Indian Pioneer project we learn on Elzora having been educated at Evangel Mission School (now the home of the Five Civilized Tribes Museum) and how deeply a part of the Creek Nation her life and history were.

This is a wonderful example of a rich family legacy, and it is also hoped that the descendants of Lizzie Williams as well as Elzora Lewis someday met, or will meet and can appreciate their shared history.

Those interviews are such a rich source of information.

Very interesting indeed. Roly Macintosh is mentioned in my Creek Freedmen ancestry along with Jno (John) Macintosh. Jno is listed as the father of my great grandmother Jane Macintosh Sells. Although listed as so on the Dawes form, the tribe does not recognize that listing as ligetimate and denies my family members tribal citizenship. We keep going on it, but it is frustrating. I appreciate your blogs/postings. They encourage me and are fascinating at the same time. I need to find out how to get you to KC for one of our Freedmen celebrations. Peace.

Thank you for educating us about the Cherokee Freedmen. I don't have roots in certain parts of this country so I always enjoy reading about the family histories of African-Americans. There are so many dimensions of African-American history that need to be expounded and you are educating us about one of the many aspects of the Black experience in this country.


Hi everyone! Hope you are doing well. I just came across your website and I have to say that your work is really appreciative. Your content is exceptional. The ease to use your site is remarkable. We also have some tools that can help you in upgrading your site. Here is the link to our website search image