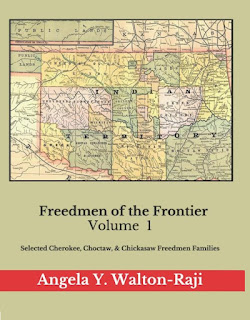 The book is here!

In 2017 I decided to undertake a year-long project to document 52 families in 52 weeks. The families to be documented were Oklahoma-based families that originated in Indian Territory among the Five "Civilized" Tribes-Cherokee, Choctaw, Chickasaw, Creek and Seminole Nations. These were African American families whose elders had at one time been enslaved by Native Americans.

The project ewas inspired by a popular genealogy blogging meme of documenting 52 ancestors in 52 weeks. But with this project the goal was to document the families from these nations, because so little is written about these families from the soil of what is now Oklahoma, although their enslavement, emancipation, and families were rooted on that soil.

By years's end, I had met the goal of putting the family stories out there, but decided to move the stories from my blog to book form, so that more people who have ties to the Freedmen of those nations, will be able to easily access these stories. Many people will find it easier to read their stories in book form than will actually go online and find their family story there.

The families profiled in the book are listed below: 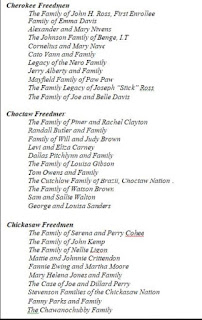 The book can be ordered directly from AMAZON.