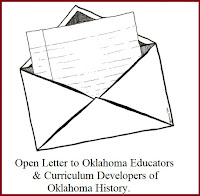 This statement was placed on the official website until finally word was passed to those in charge that the statement was not simply incorrect. It was, in fact, placing a false narrative about the relationship between Chickasaws and people who were enslaved by most of their leaders in the 19th century.

In recent days information was shared in a social media history research group for descendants of Choctaw and Chickasaw Freedmen, about the curriculum for use as part of the Chickasaw elementary school curriculum. The text has a statement that does not address the history of  slavery to any degree. The piece was shared to the group, actually painted slave holders as the victims in the one small piece that mentioned slavery. 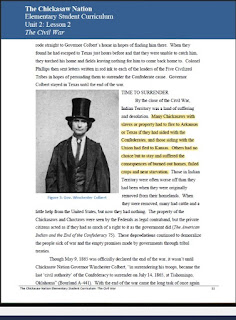 This focus of this appeal, is not to malign the Chickasaw Nation, nor the Chickasaw people. Nor it is a piece intending to put forth an angry narrative about the lives and treatment of Freedmen  in the difficult post Civil War era.

The goal of this piece  is to address the fact that several thousand people lived, worked, toiled, and died among Chickasaw people, as Chickasaw slaves, and later as Chickasaw Freedmen. And a similar story is found among the other slave holding tribes, that also brought their southern culture with them to the Territory--- they brought their language, foodways, burial practices, and among those who could afford it--the enslavement of human beings.

Most educators would agree with the following:


*To tell the story of the United States of America, without the mention of the practice of slavery would be a lie---of omission.

*To tell the story of pre-statehood Oklahoma without mention of the Trail of Tears would be a lie of omission.
But I must add to that agreement:

*To tell the story of pre-statehood Oklahoma without the mention of slavery would be a lie of omission.

*To tell the story of the Chickasaw Nation and all of the Five "Civilized" without their own involvement in the practice of slavery would be a lie of omission.

Descendants of those enslaved people who fought for freedom and won---they too are Oklahomans, living on Oklahoma soil and trusting their educators to tell them the story of the amazing land where they live. Yet, at the same time, the descendants of those Freedmen, who still remain in Oklahoma are finding that their own history is being omitted. There were thousands of Freedmen in Oklahoma at the beginning of statehood.

After more than a century since statehood, there are now hundreds of thousands of Freedmen descendants. And it is known that those Freedmen descendants who are native born Oklahomans, who speak with pride about their ancestry--they are not permitted to enroll in their ancestral nation today due to a bias against those of their race. But despite this---surely those children deserve to have their ancestors become more than a footnote in Oklahoma history. Those children who descend from over 20,000 Freedmen, deserve not to have their history overlooked and erased from the pages of their state.

Many who live in Oklahoma often see the "Friendly neighbor" advertisements coming from the Chickasaw Nation and how relations with fellow Oklahomans is so important. Yet, many young people learning their history, whose ancestors were Freedmen, see nothing of their own presence mentioned by the same "friendly" people who are influencing the curriculum.

Oklahoma African American history did not being with the Tulsa Massacre of 1921, and it did not begin with the Oklahoma Land Rush in 1889. African presence in Indian Territory began seven decades before statehood because many arrived during the years of the Trail of Tears in the 1830s. Their stories are captured in the Indian Pioneer Papers at the University of Oklahoma, and the WPA Oklahoma slave narratives of the 1930s, and the interviews of the Dawes Commission 1898-1914.

Likewise, the institutions built by Freedmen deserve more than a footnote----

There is much that can be done from the education community, and hopefully the curriculum of Oklahoma will reflect that. And hopefully Freedmen descendants will not see the lives of 20,000 people from the Five Civilized Tribes, swept under the proverbial rug as if they did not exist, and were not a part of the land that became Oklahoma.

And Chickasaw Freedmen children, whose ancestors were disenfranchised by their own tribe after the war, will not see once again, no mention, no story, no acknowledgement of their existence from the nation in which their history is rooted.

As a descendant of one whose ancestors lived in the Choctaw Nation, and who arrived in Indian Territory with the Perry clan from Yalobusha Mississippi, I can only hope that the someday the children of those who remain in the state of Oklahoma will have their history told.

I am an independent researcher, and an educator by profession, and many for whom I conduct research, live in Oklahoma. They are often quite shocked when I share records with them, reflecting that their ancestors were slaves right there where they live They then ask me, why they were never taught that in school. I can only respond by telling them to talk to their educators and talk to their leaders.

An Opportunity
This is a wonderful time and a wonderful opportunity for scholars of multiple disciplines, (history, sociology , anthropology and archaeology) to allow their spirit of academic inquiry to expand into other arenas. Tell those stories of Freedmen settlements, find this historic sites where the Freedmen schools once stood, research their past--and tell the stories of the people who made these events unfold.

My appeal is that the full history be included as the curriculum is developed, so all of the sons and daughters of Oklahoma----native people, Freedmen descendants, and pioneers--will all find their story put back on the historical landscape where it occurred.