Earlier this year many were shocked when one of the members of the two Freedman Bands in the Seminole Nation showed up to receive a Covid Shot. She was refused service, then the Lighthorse police were called to escort her out of the building.

The Freedman was a member of the tribe, and even serves on the tribal council as Chief of the Bruner band. Many were shocked how a person who serves her tribe, was turned away from a life saving vaccine, during a worldwide health epidemic.

Well, today an interesting ruling has come down from the U.S. Department of Health and Human Services, declarining that Seminole Freedmen are eligible for Health Services of Indian Health Services--IHS. 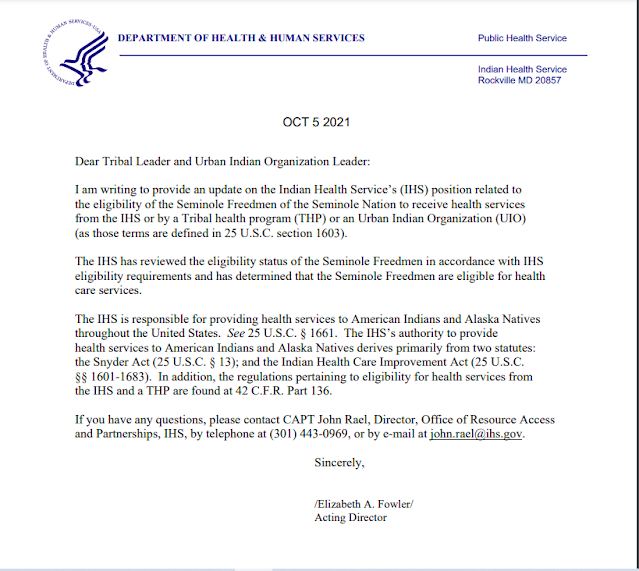 As enrolled members of a Federally recognized tribe they are eligible to receive these benefits. For many years health services have been denied to Freedmen.

Seminole Freedmen are generations long members of the Seminole Community having arrived in Indian Territory in the 1840s many as free people. They lived among Seminoles  for generations, and have been a part of the political structure of the tribe continaually. They are also people of African descent.

However, the past 3 decades have brought many challenges to Seminole Freedmen with their status being challenged. In the 1980s a strong anti-black sentiment arose, and even to the point of disenrolling the Freedmen from the tribe. They filed suit and won their case, and were re-admitted. However, their admission came with a price. They were to receive no benefits as citizens. The only thing that they could do was vote for people running for office, but nothing more. No health services, no educatonal benefits, no assistance with housing issues, etc.

The letter of October 5th from the Department of Human Services signals a change of direction. Those in the Freedmen community applaud this new development and many are hopeful that more changes will be seen coming from the other tribes of eastern Oklahoma.