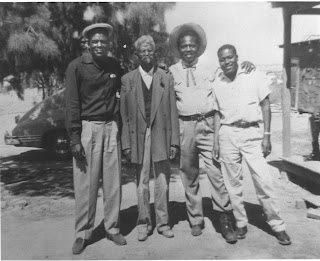 One of the lessons I have learned over the years is the value of interacting and sharing what you do with other researchers.  An example of this came from a conversation in one of the daily chats on AfriGeneas during the Lunch Bunch daily chat.  While sharing with each other, a fellow researcher who lives in Phoenix Arizona,  was aware that Oklahoma is one of my states. In that chat, she mentioned that she knew some people from Oklahoma and knew one man, now deceased who was a Stevenson. I remarked that I know that the Stevenson line was a very large family clan among Chickasaw Freedmen.  The man whom she knew was Leonard Stevenson who was deceased.  However,  she knew a member of the family who lived nearby.  As our online conversation continued she decided to phone her friend, and to ask a few questions.  The Stevenson family member said that there were a few old photos that she could look at if she wished.

Well------that is all I needed to know----I urged my friend to please take advantage of the generous offer to look at whatever photo that she had to share.  She promised to do so, when she returned from an upcoming trip.  (Well---patience is important for those of us who pursue family history.)  However, I was able to convince her to take a look at the photos as soon as possible, since her friend was generously offering to allow her to see them.

Last night---I received a phone call from my Phoenix friend, (Vicky Daviss-Mitchell)  This is the same Vicky who runs Mariah's Zepher blog. She called to let me know that she had sent me some email.  I was anxious to see what she had sent (hoping that a photo was in that email.)  Well----to my delight---a wonderful photograph of 4 handsome men---two of whom were original Dawes Enrollees--Thomas and Houston Stevenson.  The photo was a 3 generation image of this particular Stevenson family, and it was a wonderful image!!

Of course----I had to explore their history.

This particular Stevenson line lived in Katie, I.T. in Pickens County. The old man in the photo above was Thomas Stevenson. At the time he enrolled, he was a young man 26 years old.

Thomas Stevenson was a young man, with a wife Alice and several children.  The youngest child in the household at that time, was Houston Stevenson, who was an infant of 3 months at the time the family applied for enrollment.

Thomas Stevenson's father was Dud Stevenson who was deceased at that time, but his mother Georgia Ann Stevenson was still living.

I decided to pull the Dawes packet and noticed that like many Chickasaw Freedmen---their interviews had been cut from their packet and replaced with summaries.  This practice was later noticed and addressed when it appeared that some on the Dawes Commission had been purging pertinent data on Freedmen and replacing them with summaries instead of the actual testimony. Such a "summary" was in the file of Thomas Stevenson. 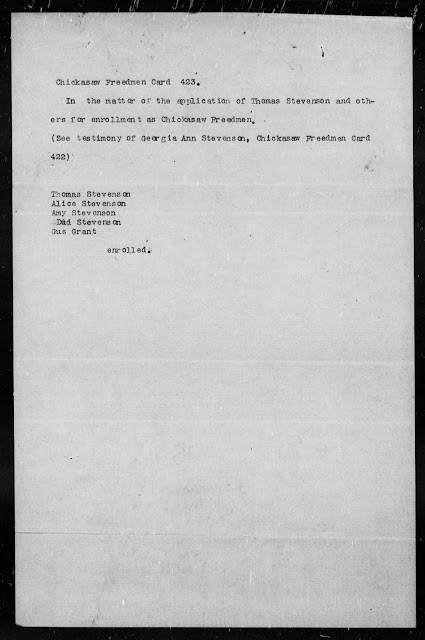 However, the good news is that on this summarized interview---was a reference to the fact that Thomas's mother---Georgia Ann----there was an interview for her on another file---the previous file--Chickasas Freedman Card 422.

I decided to look at the records pertaining to Thomas's mother Georgia Ann Stevenson.

On her enrollment card I learned that she had been born a slave of Chickasaw Indians.By examining the card of his mother Georgia Ann, additional information was learned about the family of Thomas Stevenson, including the names of his siblings: Benjamin, Robin, Levy, Carrie (who married a Butler), Malsy, & Ida.  Thomas's sister Carrie married Charley Butler who was a Choctaw Freedman. 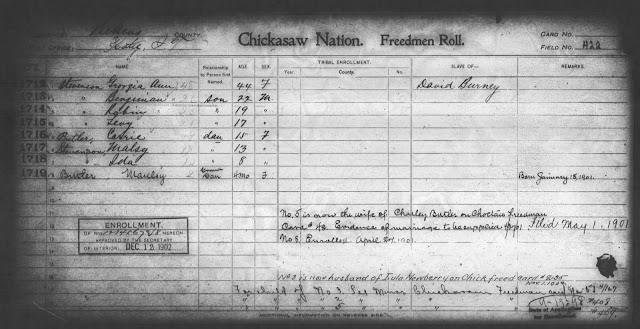 Front side of Enrollment card for Georgia Ann Stevenson, mother of Thomas Stevenson

It was noted that Georgia Ann, was at one time a slave of Chickasaw David Burney.   One the reverse side of  the card, her parents were listed: 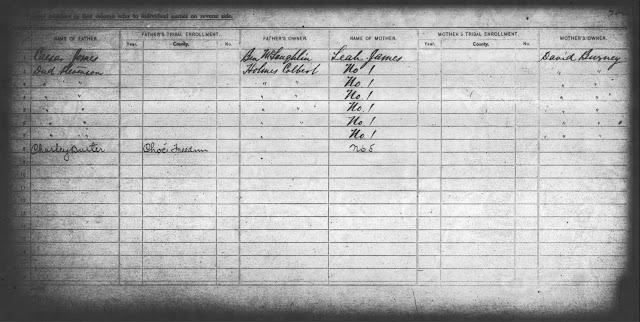 Since Thomas's file mentioned the mother's testimony, I decided to examine her Dawes application packet.
She too had one of the summarized interviews, but a bit more information was provided there. 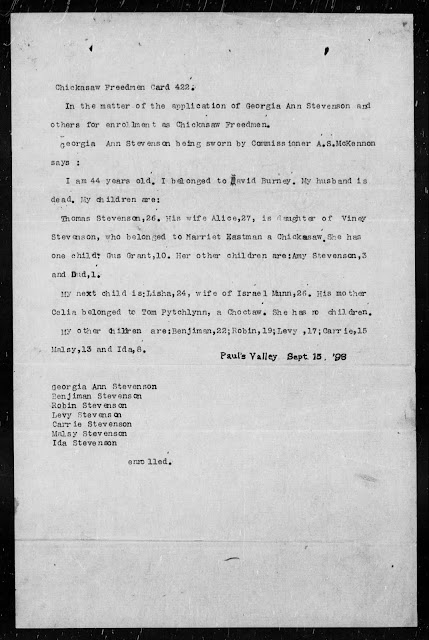 In her interview, she mentioned that Thomas's wife Alice was a daughter of Viney Stevenson, another former Chickasaw slave. She also provided the names of her own children, including some that had married.  These other children are actually the siblings of Thomas pictured in the photo above.

From the one photo and learning their names, I was able to obtain some interesting information on this branch of the Stevenson line.

Plus photos of two original Dawes enrollees--Thomas and his son Houston, are among the faces seldom seen when Freedmen are spoke of. 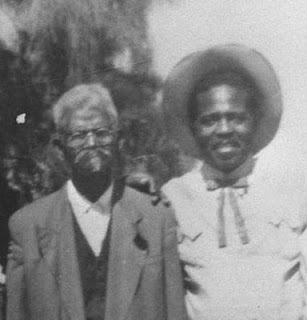 Close up of Thomas and son Houston Stevenson,Chickasaw Freedmen

Though the interview was summarized the packet there is a gem in the packet! In addition, to the info from the cards, in the packet of Thomas and Alice Stevenson, was a rare birth affidavit!  Note that Oklahoma did not become a state until 1907.  Thomas was born in 1901. So this is one of those precious birth certificates found in a Dawes application packet, that predated statehood. Not only is the infant child Houston presented on this certificate---but the attending midwife's name was included.  In this case, Georgia Ann, Thomas's mother was the midwife and listed as such. 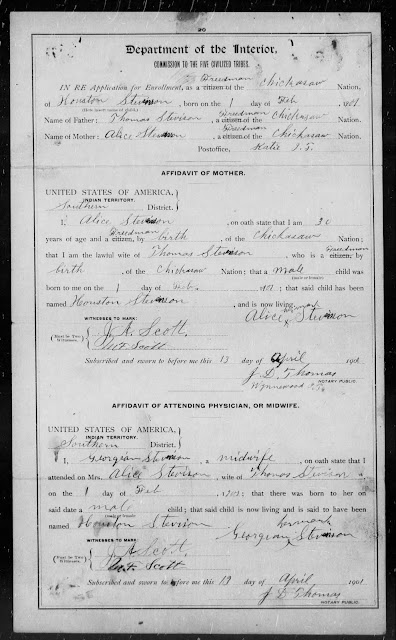 A quick glance at Carrie's husband's file, from the Choctaw Nation, he was connected the Butlers to the powerful Pitchlynn family in the Choctaw Nation. Charley Butler's father Dove Butler was a slave of Thomas Pitchlynn, as were both of his parents. 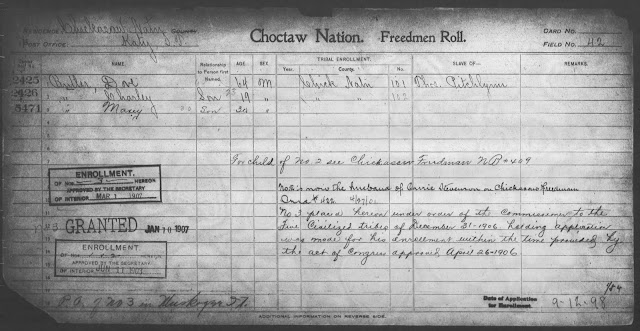 The lesson here is two-fold----always tell others what interests you.

In this case, mentioning Oklahoma as an area of research, and mentioning the Stevenson surname, led to the wonderful photo above, and the interesting history of this branch of a very large clan of Stevensons from Oklahoma to Arizona.

The second lesson is to exhibit some curiosity about those who come from the area where you family lived.  I am not related to the Stevensons, but knowing that they were such a large family among Chickasaw Freedmen, interests me, and exploring this small piece of their history was a delightful experience

Thank you Vicky Daviss Mitchell for going to look at the  photo and a special thank you to your friend for sharing the image!

But thanks to you and for friend for sharing, this photo and this information might not have been known.

Several of us in the Choctaw-Chickasaw Freedmen Association are always looking for the faces of our ancestors, and this was a delight to see! Thanks again for sharing it!

Let me also thank Ms. Vicki Daviss Mitchell for taking the time and energy to follow up on such a wonderful lead.

It is no small treasure to have an image of an original Dawes Freedman enrollee; for there to be two freedmen pictured and their next generation is pure delight for this researcher!!!

Thanx to both of you ladies for a wonderful story of discovery!!!

Leah and Caesar James ar my 4th great grandparents! I'd love to find out more about them.