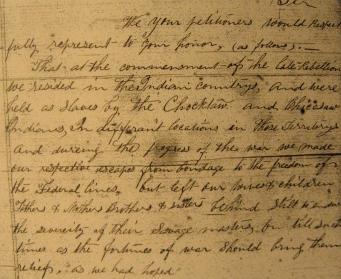 Intro to Letter of October 1865, seeking help for loved ones still held in bondage in Indian Territory
In October 1865 a group of black men--once held in bondage in Indian Territory--wrote a series of letters to the Freedman's Bureau asking for help.  Their families were still being held in bondage by Indian slave holders, many months after the war had ended. The letters were sent to the Freedman's Bureau in Ft. Smith Arkansas, and they were seeking assistance in the release of their loved ones from the painful yoke of slavery.

These letters are poignant and sobering.  Any individual who appreciates the spirit of Freedom, will find these letters touching, sobering and a reminder that slavery---no matter where---was a horrific condition to impose upon others.

Following a tip shared by a colleague to look at Freedman's Bureau letters, I sought a reference to a letter from former slaves from Indian Territory.

One letter in particular stood out---it was written by former slaves of the Five Slave Holding Tribes in Indian Territory.   The men writing the letter spelled out in detail what was happening to their families still not freed--and this was in October of 1865 six months after the war had ended. Following their request for help was a list of names----the names of their particular loved ones.

Few lists of names of people exist that mention slaves by names WHILE they were held in bondage.  What followed the letters indeed was a list of the families of these particular men. This is quite possibly the very first list of names of enslaved people from Indian Territory---prior to their release from bondage.

(It should be mentioned here, that the Treaty of 1866 eventually abolished black chattel slavery in Indian Territory.)

One page of the letter states:

"But to our sad disappointment, the war is now apparently ceased and a general peace among the white and red man is agreed upon, and generally adhered to, by those two races, and yet our dear ones are still held and tyrannized ever in a most cruel manner, by their former masters. Since the right of property in our race has been abolished by the US Government the masters have become brutal in their treatment of our color......." 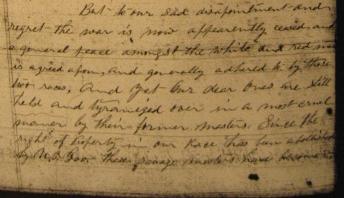 The letters are heartfelt and reflect strong feelings for their loved ones still held in bondage.  Though the signers speak mostly of Choctaw and Chickasaw nations, but one of the names of the signers (Bushyhead) reflects some Cherokee heritage as well.  Several of these men had served in the Union Army, including the Indian Home Guards and the US Colored Troops. 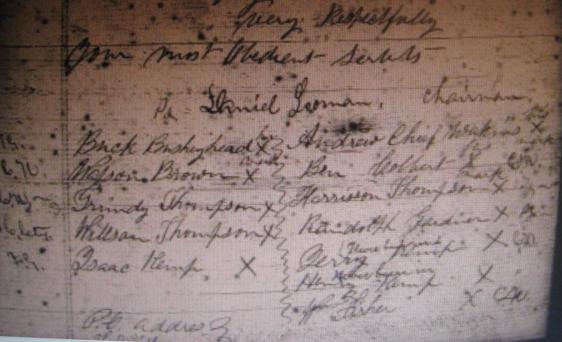 
Remarkably the names of the families were also included in their appeal, and so this small collection of names represents possibly the very first list of names of enslaved families, still held in bondage in 1865.  Though small, this may also possibly be t:he earliest list that could be described as a  small "census" of black families from Indian Territory. 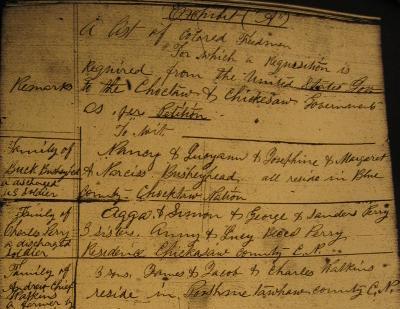 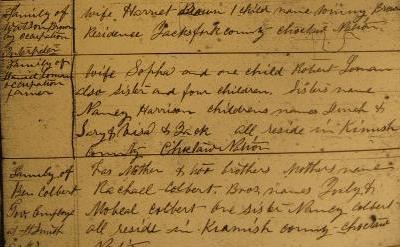 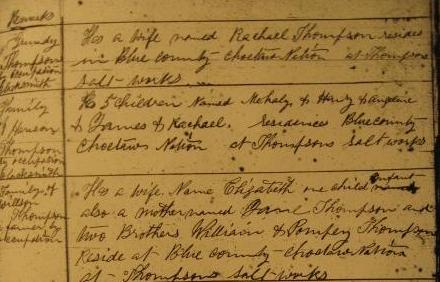 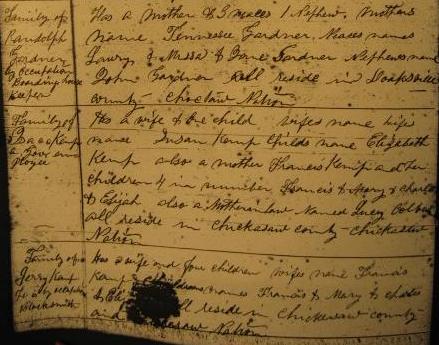 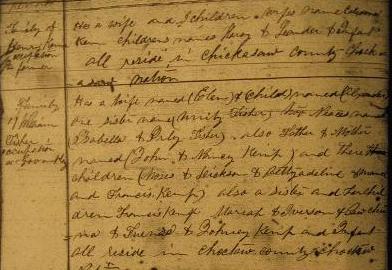 Family of Henry Kemp Wife and 3 children.  Wife's name Caledonia. Children's names Leroy & Leander & Infant.
Family of William Fisher  Wife Ellen and child names Alexander. One sister named Emily Fisher. Two nieces named Isabella & Prly(?) Fisher. Also Father and Mother names John & Nancy Kemp and their children Moses, Dickson Betty Adeline,  (?) and Francis Kemp. And a sister and her child Frances Kemp, and her children Mariah and Iverson and Ben (?) and Thomas and Johnny Kemp and infant.
It is not known when these families eventually got to breathe their first breath of freedom, but many of these persons remained in Indian Territory---which was their home, and 30 years later, many of them and their children were later enrolled by the Dawes Commission and received land allotments.
Buried in the hundreds of letters sent to the Freedman's Bureau was this wonderful piece of  history from Indian Territory and I was blessed with the opportunity to find their names and to share them here.
Posted by Angela Y. Walton-Raji at 11:49 AM

What a fantastic find. Thank you for sharing.

On my side 0f the family my father Crawford Roach is listed on Dawes as a minor Cherokee Freedman. My ggrandfather Daniel Roach was slave in the Cherokee Nation. He was owned by Moses Price. He said Moses raised him. He was sold to Joshua Roach by Looney Price.

My mothers side of the family started out in South Carolina migrated to North Carolina, then to Indian Territory Oklahoma. From there they moved to California. My ggrandfather George W Louns and a relative applied to the Miller Roll under the names George Lounds and Green Lonza. They spelled the surname many different ways through the years.
As a result they have been hard to trace. I was able to trace Green back to Marietta South Carolina.
marmorr98@aol.com

My great, great grandfather joe is brother to Randal Gardner and I am trying to trace my family as far back as I can. Thank you for sharing this information.

What a pleasure to see that someone has actually connected with the names in the letter! This is from the Freedman's Bureau, and not found among any Oklahoma-based documents! I look forward to finding out more about the Gardner's and their fate. If you wish to discuss more, email me at AngelaW859@aol.com

I wish i could talk to your husband. Nancy colbert and henry fulsom is my gg grandmother their son Will fulsom is my granny who is living dad she knows alot about the family history our cousin Lowell fulsom pasf away he was a blues man with a heart of gold he played with bb king and traveld to my grannys often my granny knows about all of her cousins on her dad and mom side email me staycee05@gmail.com... Colbert and fulsom information