Pages from Souvenir Booklet from combined
school event from participating black high schools in
1950, Muskogee County, Oklahoma
When we speak to our elders, asking them about details from their own life and their youth can sometimes bring out wonderful artifacts from their lives.  These artifacts are more than just mere souvenirs, for they are reflections of the times.

I had a chance to look at such artifacts from a cousin who lived in Muskogee Oklahoma when a young girl, and she shared a booklet from her youth.  Though a this might appear to be a mere senior prom book---it told a greater story.

It must be pointed out that Indian Territory, now Oklahoma is seldom mentioned as part of the south, but southern it was. In the early days of Indian Territory there was slavery, slave rebellions, the Civil War, Reconstruction, and then legalized segregation. Freedmen struggles, and the struggles of blacks who fled the deep south----all led to circumstances that made the lives of our ancestors in the Territory and later in the new state of Oklahoma very challenging.

But this was also felt among those of the next generation, who became our parents,  Although the 20th century for many brought a degree of stability,  hundreds of black families at the very least, saw a system that would provide mandatory education for their children, though segregated. Thus, children of  Indian Freedmen from the Slave holding tribes as well as "state Negroes" both became victims of a well entrenched system of exclusion that would last for 6 decades. But----they coped within the system.

Their schools did not have much funding individually to hold their own events such as proms. And many had senior classes that were extremely small---in some cases less than 10 graduating students. So---to provide some social outlets for the students, the segregated schools decided to hold a combined senior prom, incorporating the black schools in the area.  Most were from Creek communities, including towns such as Tullahassee, Rentiesville and Summit.

From my recent visit to Reno Nevada, and spending time with my father's first cousin who attended such a segregated school in Oklahoma-- she brought out some wonderful old photos and souvenirs from her high school days in Muskogee Oklahoma. She graduated from the well known all black high school in Muskogee, Muskogee Manual and Training School.   One of her mementoes was a souvenir book from her Senior Prom in 1950. 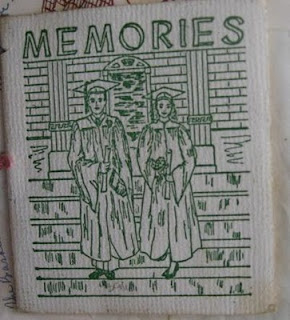 The prom was a collaborative effort between the black high schools in the nearby black towns and settlements, and all celebrated together.  The booklet reflected the communities where mostly Creek Freedmen resided, and the names of the seniors from each participating school was listed. They were listed as "Special Guests."

Though the booklet could simply be described as a souvenir from an event in the life of a teenage girl, it is more than that.  The families living in a segregated south, did carve out meaningful lives for themselves. They thrived and shared events and they too, holding on to precious memories of the days of their youth.

The booklet reflects the fact that even where some of the graduating classes were notably small, such as Ft. Gibson, they were segregated and would not be merged into the larger school systems till the late 1960s, when integration came. So their schools, though separate and not equal to the schools of their neighbors--persevered, by merging events and social activities and they interacted within a larger community where residents of the small black settlements cooperated to provide a social network for their children. 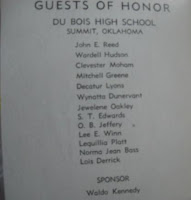 Many of these students attending this senior prom in 1950 are now in their 70s, and thankfully time has changed somewhat---even in Oklahoma.  Though struggles still continue especially for those seeking more information on their history in the historical black communities---it is through the artifacts of our families that we can obtain interesting glimpses into the past. 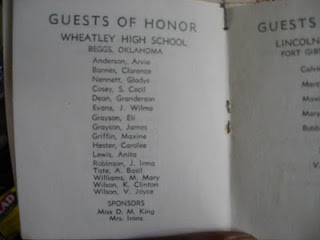 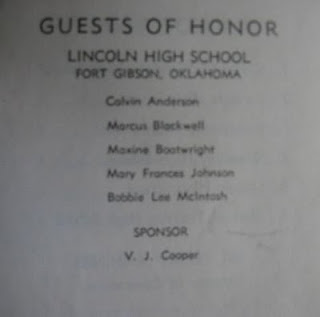 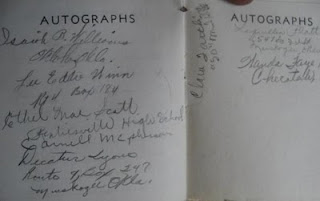 The greater lesson is for us to inspect the items from the past and to place them in the historical context from which they came.
These schools no longer exist and the children and grandchildren of these students now attend integrated schools, with exposure to the same curriculum, textbooks and opportunities.  We must also appreciated how our parents and grandparents coped within a world that put so many obstacles in their paths for success. Our own appreciation for their accomplishments should therefore enlighten us and inspire us all to tell their stories.
Posted by Angela Y. Walton-Raji at 6:21 AM

What a great post Angela!! Thanks to your cousin for saving those memories and sharing them with all of us...

Thanks for visiting the blog.

Yes, I was so excited when I saw her souvenir booklet and when I recognized some of the schools being in the historically black Oklahoma towns I was especially excited to see them. I am so glad that she shared that wonderful booklet with us.
-Angela-