Old Newspapers - A Gateway to the Past Days of Indian Territory 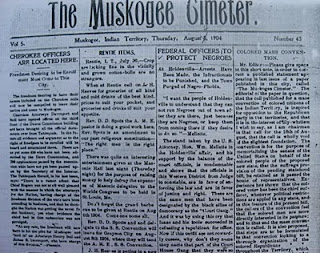 Muskogee Cimeter - Muskogee, Indian Territory
August 1904
In 1904 the Muskogee Cimeter, an African American newspaper in Indian Territory, a series of articles appeared reflecting the events from the local citizens. This Muskogee newspaper, was based in the Creek Nation, but it reported events pertaining to Freedmen from both Creek and Cherokee Nations, in addition to all items newsworthy to the black population as a whole. From such newspapers much history can be learned and one can also reflect how the events of the day may have affected their own families.

Glancing at the front page of the Muskogee Cimeter, in August 1904 one learns that towards the end of the Dawes interview process, several hundred Freedmen from the Cherokee Nation were still not interviewed. Therefore, they had to travel from their homes in Cherokee country, to interview with the Dawes Commission in Muskogee.

Articles from the town of Rentiesville
The activities of the local AME Church were mentioned and the community was also preparing eagerly for the annual August 4 BBQ. As is known by many with ties to Oklahoma, August 4th was celebrated for many decades as the official celebration of Emancipation. This day commemorated the date when the Loyal Creeks made an official designation of the Freedmen as citizens of the nation. This was prior to the 1866 treaty, in fact. For many years Freedmen throughout Indian Territory symbolically embraced August 4, as a day to celebrate their own release from bondage. Many black communities held annual picnics, barbecues and celebrations to honor this date. In the latter half of the 20th century some of the emancipation celebrations evolved in to local church homecoming celebrations that occurred at the same time, but the newspapers of the day clearly reflected the importance of August 4th as a celebration of Freedom.
(According to scholar Gary Zellar: On August 4, 1865, the Loyal Creek Council formally declared that African Creeks would be considered full citizens of the Creek Nation. African Creeks soon designated August 4th “Emancipation Day” and organized celebrations, including picnics, parades and speakers beginning as early as 1867, which continued through the Territorial days and early years of Oklahoma statehood. The celebration fell into disuse as the African Creeks and other Indian freedpeople were increasingly marginalized in the twentieth century.)
SOURCE: Gary Zellar, African Creeks: Estelvste and the Creek Nation (Norman: University of Oklahoma Press, 2007).

Remembering August 4th Emancipation Day
* * * * * * * * * * * * * * *
Acts of violence towards people of African Ancestry were common throughout the South and in the twin territories--Indian Territory/Oklahoma Territory life was no different:
Holdenville Citizens Needing protection
The town of Holdenville had experienced violence towards its black citizens and Federal officers were aswked to intervene. This occurred 3 years before statehood, and many in that small community were not protected from such threats to their safety.  References to the Republicans (the more liberal part of the day) being unseated by more hostile southern Democrats, were heard, and the terror with which the population lived are discussed.

* * * * * * * * * * * * * * *
A Call for a Mass Convention
The political climate of the day was felt by the local population and was reflected in the same publication. A call for a mass Colored Convention was made and was scheduled for August 16th calling many who were spokespersons of the day to celebrate.  The purpose was to call for the rights of suffrage as stated by the United States constitution.  As statehood quickly approached, the concernw as that blacks living in the soon to be new state, be given the right to vote, and not be ostracized as were blacks in other parts of the South.

Our goal of course, is to tell the story.