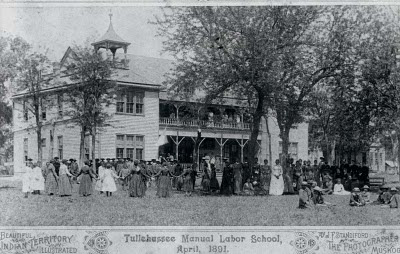 Tullahassee is one of the few remaing black towns Oklahoma, located in Wagoner County, Oklahoma. This once vibrant town was a community that was residence to many Creek Freedmen, and was once a thriving community.

One of the most memorable images of life in Indian Territory, can found from the image of the schools that were established for Freedmen of the Five Tribes. Education was an important goal of many of the former slaves and their children, and much effort was put into obtaining qualified teachers who would provide new avenues for the next generation.

Schools such as the Tullahassee Manual Labor School began to appear, and fortunately it was one of the schools from which a few images have survived.  This school originated as a school for Creek Indians in the 1850s. It existed at the confluence of the Arkansas and Verdigris Rivers.  After destruction by fire, the school was rebuilt and established as a school for African Creeks in the 1880s.   For many years, it was the only school that offered schooling beyond the 8th grade for Freedmen.

After the tribes were dissolved in 1906 and statehood came in 1907, the school was under control of the BIA till 1914.   [Source: Gary Zellar, African Creeks: Estelvste and the Creek Nation (Norman: University of Oklahoma Press, 2007)]

In 1916, the AME church established Flipper Davis College which was the only private institution for African Americans in the state, and it occupied the building of Tullahassee Manual Labor School until the doors closed in 1935. The school operated as a Junior College under the direction of Bishop James M. Connor. During its years of operation it was the only African American Junior College in the region. Hopefully someday images from the junior college years will surface.

In the years in which the photo above was taken, the board consisted of  L. W. Manual who was Superintendant, H.C. Reid, and Sugar George, a well known leader in the Creek Nation and leader in the Creek Freedman community. In 1995 while looking for data on Sugar George, I was able to locate a document from the Tullahasse school, reflecting the expenses accrued at the school and the signatures of the persons who ran the school.

These documents represent a budget sheet showing school expenses, and reflects the signatures of the men on the board. 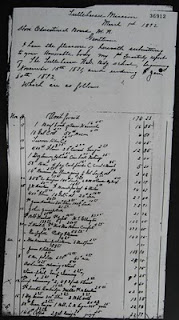 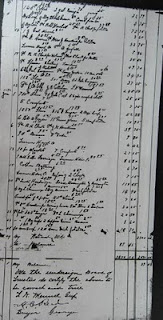 Signatures of board members
(L. K. Manuel, H.C. Reid, Sugar George)
Unfortunately there are not remnants of the school anymore, and very little on the town of Tullahassee Oklahoma landscape reflects the unique history of this school and those who attended it.
Within the town of Tullahassee, stands, there stands only 1 original building from the era of the Tullahasse School and Fliiper Davis College---the A.J. Mason Building. This was a general store built by the Mason brothers. They owned a cotton gin in the region and extensive farm land. Many would bring their cotton crop to the Masons for it to be ginned and would shop in the store for supplies while their cotton was being ginned. Today the Mason General Store building is preserved as an historic landmark.

A. J. Mason Bldg. Tullahassee, Oklahoma
Glimpses of Oklahoma's African-Native past partially lie in the landmarks.  Many have already disappeared such as Oak Hill Academy, in Idabel, the Cherokee Nation Colored High School, that was once in Double Spring, and Dawes Academy in Ardmore.
My goal is to work so that this history can be be preserved, and my hope is that more descendants of these communities will work to find the old photos, momentoes, artifacts that reflect this fastly disappearing rich history.
Posted by Angela Y. Walton-Raji at 3:00 PM