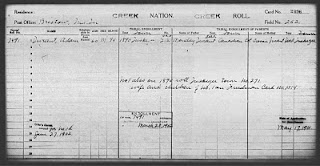 Adam Durant Creek By Blood
(Census Card 2496  Field Card 2521)
Click on image for a larger view.
After recently sharing information about Monday Durant who worked closely with the Creek people for many years, especially in the latter half of the 19th century, several individuals who also research Indian Territory have shared information pertaining to a much older Monday Durant.

The question is, who was the elder Monday, and were they related?
The answer could be found by researching Adam Durant, the younger Monday's father.

Thus the elder Monday is the grandfather to the younger Monday Durant.

It was asked if the two Mondays were related and as this first study it does appear that they were related.

I noted also that on Adam Durant's card, by blood, his wife Dicey Durant and their children are on Creek Freedman Field Card #1514.  (Note the reference is to the Field card and not the Census card number.)  If the father was 1/4 Creek, then the children were 1/8, although being put on the Freedmen Roll their blood tie is not indicated.

Monday Durant (the younger) indicated that his mother Hannah Caesar was deceased so it is not clear what town she was part of. Noting however that the elder Monday was also of Candadian Colored as was the younger Monday, then the chances of their truly being grandfather and grandson are high.  Adams Durant's wife Dicey at the time of the Dawes Commssion, was also a member of Canadian (Colored) Town. 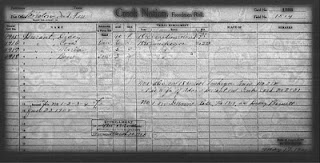 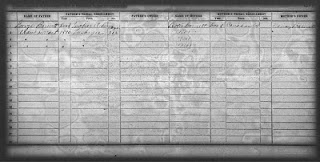 Dicey Durant (Back Side of card)
(click on image for larger view)
The structure of the Durant family clearly illustrates how this was a blended family--with both Indian and African Creeks residing in the same household.

In the 1900 Federal Census, Adam Durant and wife Dicey (written as Dysa) were enumerated on the Special Indian Census. 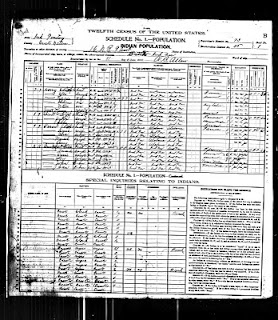 It should also be noted that blended families like this occurred in all of the nations, of those that were once the Five Slave-holding Tribes.
Posted by Angela Y. Walton-Raji at 7:19 PM