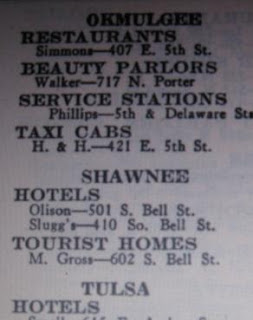 On my genealogy blog My Ancestor's Name, I recently featured an article about information about a directory published for African Americans traveling during the harsh years of living with Jim Crow laws in America.  This directory, called The Green Book was useful for those black people who had to travel to new cities and towns and who would need accommodation and need to be safe in places that were hostile.  It provide information on hotels, inns, and homes where accommodation could be found.   Oklahoma had an impressive site listing, featuring black owned businesses and establishments for travelers.

This booklet was published yearly, and the 1949 Edition of the Green Book can be found online. 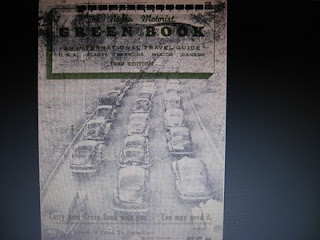 While looking at the Oklahoma entry one learns where there were African American places of businesses were at the time or where businesses that welcomed black trade could be found.

I noticed that several establishments existed where there were sizable Freedmen communities, and one can ask if these were once owned by persons who were Indian Freedmen, or their descendants. Cities like Boley, Okmulgee, Muskogee were included in this directory.  I decided to find some of those places as I wondered what they look like today.

Since the directory featured online is more than 60 years old, and the addresses were posted on the pages of the booklet, I decided to take a look to see if some of the establishments still stand. The significance of looking at these places is that they provide a glimpse into the past where many of our parents and grandparents lived and they reflected how they coped with the times within an insulated community, isolated by the laws of the day.

My questions----What is the status of those places today?
Is the site till owned by the same persons?
Can part of the history of that community be seen if one is to stand on those same streets today?

I noticed that Okmulgee Oklahoma had an impressive listing.  At 407 E. 5th street there was a restaurant known as Simmons. 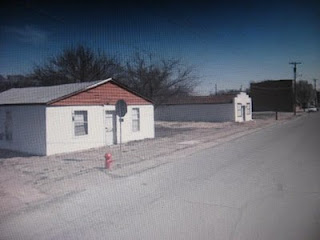 Looking down the same street today, is this what possibly remains of the old Simmons restaurant that served a black clientele? Was the restaurant owned by the Simmons family related to Jake Simmons? 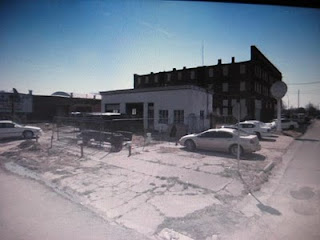 Is this the old Phillips service station on 5th & Delaware in Okmulgee that served black patrons?
Looking at the addresses in Tulsa, the expressway cut through many of the establishments and much of what existed 60 years ago is now gone. 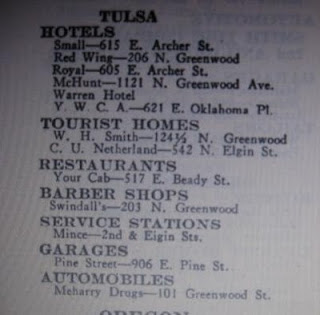 Many of the establishments on these addresses are now gone and an expressway cut right through the community.
A Road House Listing
In Muskogee on So. 24th, an establishment referred to as a "Road House" was listed. It was called the Blue Willow Inn.  Is this the shell of what might have been that road house?  Or was this an old church or school?  Being the oldest building in the area now---one can imagine the stories told within the walls. 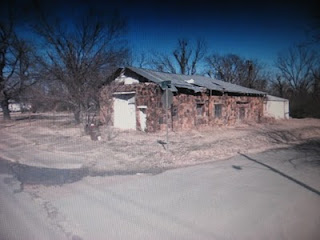 Is this the old Blue Willow Inn, or another black owned business that served the community?

In Guthrie, on East Springer Street some would find a bed in one of these homes, since hotels would provide no lodging. 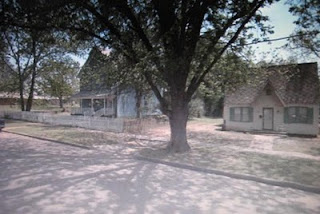 E. Springer Street, Guthrie, Oklahoma
We, as genealogists utilize many resources and we look at the information that can be found and also analyze what is not listed.  Sadly in this case, communities like Ardmore, Berywn, Milo, in the south were not included nor were Tahlequah, Wewoka, nor Idabel and Valiant and other communities where many African American families, Freedmen, lived.
How did travelers to those communities fare?  Hopefully, if they had family there, they found the warm bed and comfortable meals they sought and needed.
Of course, as researchers, our task is to look at all resources to assist us in telling the story.
Sometimes part of the story might simply be---asking the right questions.
Posted by Angela Y. Walton-Raji at 10:39 AM

Angela, I have to commend you on an excellent use of today's technology to tell a story of long ago.

By including images of contemporary streets and buildings it is possible to imagine the places you speak about, what a wonderful way to tell a story!

Thank you for your kind words. Much of what we do is tell the story, and hopefully we will bring to life through images and narrative the stories of another era. Hopefully also we can speak to as many elders to capture even more.