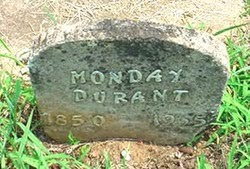 Several years ago while documenting Cane Creek Cemetery with a close research colleague, I was more than surprised to see the headstone of Monday Durant.  We went looking for the headstone of Cow Tom--which we did find.  But another surprise awaited me that day---there was another name I had often read about:  Monday Durant!  This was amazing to see, as his name was often found among tribal affairs for several decades in Creek Nation history.

Monday Durant was a prominent leader in the Creek Nation. He was born free, in the Creek Nation, around 1850 and he was the son of Adam Durant also free born, of Tuskeegee (Taskigi)Town and Hannah Ceasar. As a young adult in his twenties, by the mid 1870s's he quickly rose to become a leader in the Muskogee Community where he lived. Being fluent in both Muskogee and English, many in the tribe depended upon him for his language skills.  He also was known to travel on official delegations to Washington with tribal leaders.

He served in the House of Kings and usually voted along the same lines as other African Creeks. He was part of a group of young African Creek leaders (Simon Brown, Sugar George, William McIntosh. Silas Jefferson and Monday Durant.) He did interact with older African Creek leaders as well, such as Harry Island, Ketch Barnett, William Nero and Cow Tom. By the late 1870s however, these older leaders had already died and men like Sugar George and Monday Durant emerged as the more dynamic men of their day. 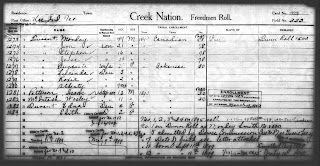 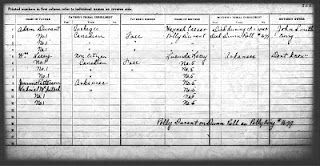 Back side of Dawes Enrollment Card
(click on image for larger view)
Monday Durant was an associate of Silas Jefferson (Ho-tul-ko-micco) who was an advisor to Locha Hacho.
During one time of political upheaval in the tribe a movement began to remove Chief Lacho Hacho from office. Hacho had strong support of the African Creek leaders. When hearings were made for Hacho's removal, the African Creek leaders voted in a block to insist that Hacho remain in power.  However, Durant had traveled to Washington during that time and could not cast his votes with other African Creek leaders, although he strongly supported Hacho, as well.  Hacho was removed from office nevertheless in spite of the strong votes in his favor.

Durant received his land allotment and went through the Dawes process, like others in the Creek Nation.  He lived to see Oklahoma statehood, and saw the dissolution of the power among the African leaders, over the years.   He died in 1925 and is buried in Cane Creek Cemetery, in Okmulgee.

His story is place here, so that he will not be forgotten.
Posted by Angela Y. Walton-Raji at 8:46 PM

Interesting. Thank you for always informing us about this part of history that most of us know nothing about.

Abstract: Latchlin Durant seeks to regain possession of slaves given by his grandfather McGilveray to his mother. Durant says that the slaves were "forcibly taken" and, in 1803, delivered to David Tait [Tate] of Baldwin County, who held them in trust for Alexander McGilveray, a minor who died in England without any issue. Durant states that all the named parties "were residing in the Indian Nation & under Indian Laws at the time of the transactions" and that "all the parties except McGilveray your Orator's grandfather were of Indian blood & descent by the father or mother or both." Durant declares that as the only surviving son of his mother and the oldest surviving male descendant of his grandfather, "by the laws of the Creek tribe of Indians ... he is the sole heir of said McGilveray." Now Tait has died, and Durant asks the court to order his heirs and executors to account for the slaves, which he estimates to be more than one hundred; to compensate him for their services; and to return them to his possession.

My Great Great Uncle and Great Geat Grandfather were the best..love hearing about my history

I am so full of joy and excitement to discover my family's history!