Today is the anniversary of the beginning of the Civil War. On this day the first shots were fired at Ft. Sumter that began the saga that would divide the nation. It would also be the beginning of the dismantling of the heinous institution of slavery. As a practice, slavery also existed in Indian Territory, and several thousands of Africans had lived in bondage in Indian Territory enslaved within the Five Tribes brought west on the Removal..

Many enslaved Africans ended up in Kansas, some having escaped and others having traveled with their slaveholder of the Lower Creeks, who had hoped to avoid the conflict. This faction was lead by Opothole Yahola.  Once in Kansas many of the African Creeks had also found freedom and when the opportunity  came, they enlisted in the Union Army.  Many joined the 1st and 2nd Kansas Colored Infantries. These units eventually were re-designated as the 79th ant 83rd US Colored Infantry.

However---there are a good number of men--who are not known, and on this day---the anniversary of the beginning of the Civil War, I am compelled to share then names of many African men, who also served in the only 3 Indian Union Army regiments. (The rest of Indian Regiments became Confederate Army soldiers and the regiments are listed below following the listing of the black soldiers of the Home Guards ) 
Some Background on Indian Territory in the Civil War.

It is important to know that the Home Guards (1st, 2nd and 3rd) were the only Indian Union Regiments.
The remaining Native American regiments were Confederates. There were 25 Indian Confederate Units Many of these Indian soldiers were also leaders in the tribes, and many were also slaveholders. (Although the Lower Creeks went north into Kansas, the Upper Creeks stayed and signed and alliance with the Confederacy.)

The African Indians of the tribes who served in the Indian Home Guards, in addition to their brethren in the 1st and 2nd Kansas Colored Infantry, should be honored for their bravery and for their actions during the Civil War.

These men, like  the US Colored Troops were all Freedom Fighters and should therefore be remembered on this day, the anniversary of the American Civil War. 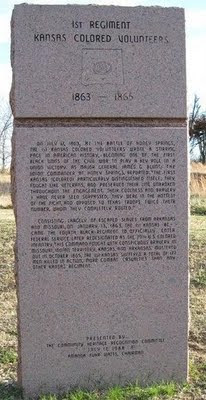 Monument to the Kansas Colored that also fought at Honey Springs, Indian Territory.
Many of these soldiers were also African Creeks and African Cherokees and African Choctaws

Thanx for bringing the history of the Indian Territory Freedmen and their involvement in the "War of Rebellion." I hope you will bring attention to the other freedmen such as Thomas Blackwater, Bynum Colbert, and Isaac Alexander to name a few who fought during the war but not in the Home Guard.

Oh yes, I intend to bring out the fact that persons such as those that you mentioned others served nobly in the US Colored Troops and the Kansas Colored Infantries!

Why did most Indians joined the Confederates? Seems it would be just the opposite, since the Native Americans were treated badly themselves.

Many of the leaders of the Five Tribes were from the south, were wealthy had owned slaves themselves. One of the wealthiest Choctaws for example owned over 500 slaves. See the article I published in February:
http://african-nativeamerican.blogspot.com/2011/02/free-men-slaves-and-slave-traders-in.html
(Copy and paste the link)

Because many of them were slave owners they fought to preserve their way of life. This was only for the Five slave-holding tribes, sometimes called the Five Civilized Tribes. Unlike other tribes they had become very Europeanized.

The Chief of the Cherokee Nation, John Ross--he had over 100 slaves himself.

Also note that the slaves were not freed in Indian Territory till 1866 a full year after the Civil War. Though slavery was abolished in the US, they refused to free them till they had to sign a Treaty abolishing slavery in each tribe.
Ironically there were some free blacks living in some of the tribes, but there was a major limitation on what they could do like have guns, and participate in various events. The history is indeed fascinating.

I appreciate this information. It is mostly unknown by the majority of people, black or white. Only recently did I discover a member of my family tree-Wheat Baldridge, a Cherokee Freedman who served with the 3rd Regiment, Company F, Indian Home Guards, Kansas

I have information on your ancestor Wheat Baldridge! He filed for and received a Civil War pension! Contact me at AngelaW859@aol.com and I might have more to share with you.
-Angela-

Given the extensive intermarriage of black slaves, and black freedmen with Indians, is it reasonable to conclude that there were black freedmen and mixed-race black men and Indians in the Confederate regiments, such as those who served under Stand Watie?

Considering that the tribes had signed treaties with the South at the very beginning of the Civil War, and the plight of the slaves in the Territory, it seems unlikely that they would have Black soldiers allies.

TheConfederates were vehemently against Blacks fighting and being part of their army. Until Three weeks be for Robert E. Lee surrendered, they opposed the use of Black soldiers. Stan Watie would
have not violated orders of his superiors in general.