Our History Has No Shame 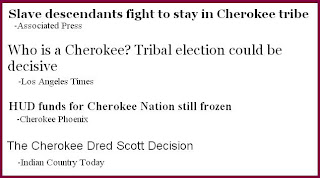 If one has been reading the papers, there has been a flurry of articles from the mainstream press as well as the Indian press.  All refer to the current issues of the rights of Cherokee Freedmen.  These are people who have a documented tie to the Cherokee Nation. These are people that many in Tahlequah wish would disappear, but at last, their existence is becoming known. Their ties in fact are well documented.  There is the Dawes Roll--but there are three additional rolls depicting black Cherokees before that. (see below) And decades before the Dawes Rolls were created, there were several hundred slaves taken west on the Trail of Tears.
This history is the very reason why such headlines appear in the press today. The descendants of those slaves---whose taxes pay for their very own discrimination, are speaking out against their exclusion and treatment. Many are writing about the subject, and for some, the argument is simply put by Professor Carla Pratt, of Penn State University:
What Does a Slave-holding People Owe to the Those They Enslaved?

Professor Carla Pratt, Dickinson College of Law
To many, the story in the headlines in recent months has been a story that is complex and confusing.
To others, this is a story where those who were enslaved, lived within a community, were later freed, and now ostracized by the community where they were enslaved. To others this is a latent struggle for civil rights.
For many, this is a source of surprise and shock, because much public sympathy is given to Cherokees and sad stories about their sufferings on the Trail of Tears are well known.
But now it is becoming widely known that this same group enslaved others, and now 140 years later---some wish to have nothing to do with the descendants of those slaves--citing an "invasion" of now "non-tribal" people who have no rights, and who should never have rights. There are fears that including this portion of people who were in the Territory from the years of removal to the present, will somehow make their nation weak.
The press has covered this story with a variation of  headlines and reactions. Some will call it blatantly racist. Others will point out the injustices of how a tribe receiving Federal funds, and those same funds paid for by taxpayers---including Freedmen descendants---are now used to prevent descendants of the tribe's former slaves from being considered a part of the nation where their ancestors continued to live.
The story is a broad one that covers not only one, but  of FIVE tribes of Oklahoma. Those tribes known as the Five "Civilized" Tribes, by some, and the Five Slave-holding Tribes, by others, were removed to Indian Territory years before the Civil War. (Cherokee, Choctaw, Chickasaw, Creek and Seminole Nations) But what is not known is that slaves---African slaves---from the American South were taken westward with them.  These slaves were not friends, or wards, or people "taken in" as many wish to hear.  These people were enslaved, auctioned for, purchased, traded,  bartered for and sold.
The ugly side of America's past also stains the histories of these tribes, although to date, none of these tribes, nor their "official histories" even admit that it took place.
However, there are records---thousands of them, that tell another story---and these records rest in many places.
One hears about the Dawes Rolls---but before that there was the Kern Clifton Roll. Before that there was the Wallace Roll. Before that there was the 1880 Authenticated Cherokee Roll. Before that there were the federal records---the 1860 Slave Schedules, and before that there were the hundreds of Cherokee slaves taken west on the Trail of Tears.
There is an abundance of documents, and the records are worth studying and the story is well worth telling. 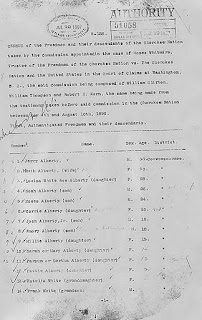 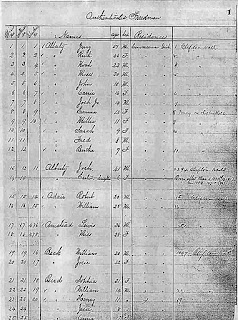 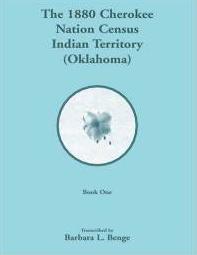 Barbara Benge Documented the 1880 Authenticated Cherokee Census in her book published by Heritage Books
Thankfully the records and the press are slowly unraveling the secret of the stories of 7,000 plus slaves from Indian Territory, and their descendants.
And Genealogists as well as hsitroian historians are telling so much more. One historian Dr. Tiya Miles who has begun to tell the stories of the slaves of Cherokees was recently awarded the esteemed MacArthur Award--the genius grant for telling this little known chapter in American history. The lesson for us all is to tell the story and to study the records, old and new and insure that this significant part of history will no longer be hidden.
Those of us who descend from those who were enslaved must remember---our history has no shame. The shame comes in not telling the story.
Whether descendants of the enslaved or the slave holder, withholding this story dishonors the ancestors and dishonors the past, it creates disharmony in the present and it also threatens the future.
We honor all of our ancestors by telling their story. Descendants of slaves are now discovering this story and telling it.  Descendants of Indian slave holders .....some are acknowledging it, some are resisting it, but like all battles for integrity, that which is correct, shall prevail.
Let us chose to honor our ancestors---all of them.
Posted by Angela Y. Walton-Raji at 9:17 AM

I DON'T THINK THEY HEARD YOU! LET ME REPEAT!!!

Those of us who descend from those who were enslaved must remember---our history has no shame. The shame comes in not telling the story.

Whether descendants of the enslaved or the slave holder, withholding this story dishonors the ancestors and dishonors the past, it creates disharmony in the present and it also threatens the future.