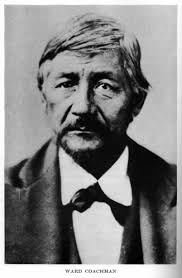 Source of image: Oklahoma Historical Society
Studying the history of Indian Territory Freedmen is an endeavor that requires that one explore the presence of the Freedmen in their respective nations after slavery was abolished in the tribes. Citizenship was established by Treaty and each tribe signed the Treaty of 1866, and the former slaves were given the privileges of citizenship. Whether this citizenship was recognized varied from place to place, and from person to person. One can glean from the remarks of Chief Ward Coachman, in 1877, that the presence of Freedmen was not one entirely embraced by everyone in the community. However it does appear that this leader recognized the rights of citizenship to be held among Freedmen who had continued to live among Creek people.
Who was Ward Coachman? He was elected second chief of the Creeks in 1875 and not long afterwards, he became Principal Chief when Lochar Harjo had been impeached and removed from office. His tenure was short and he served only three years.
In 1877, on October 1st, he made an address to the House of Warriors and the House of Kings, addressing affairs of the tribe. 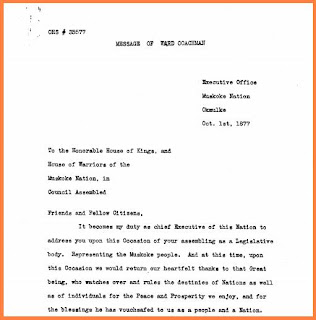 Source: Oklahoma Historical Society
He addressed the status of education for the children in the tribe, the state of the economy which was an agricultural one, and he also addressed the rights of all of the people of the tribe, including the Freedmen, and a group to which he referred to as "The McGilbray Freedmen." 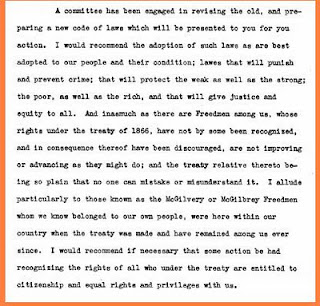 Source: Oklahoma Historical Society
The statements made by this Principal Chief are clear and are one of the few times that one will find words from a tribal chief of the former slave-holding tribes, that address the rights of their former slaves to remain and live fully as citizens. He particularly recognized, that if necessary, "some action be had recognizing the rights of all who under the treaty are entitled to citizenship and equal rights and privileges with us."
Although times have changed in a dramatic way over the past century, the wisdom and sense of equity expressed by this leader of the Muscogee people should be read again, and there might be lessons from which many can learn and grow during these times of contention. 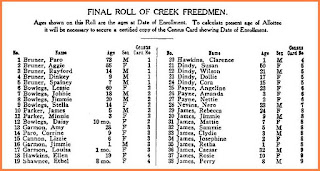 Enrollment Card of one of the McGilbray Freedmen
Posted by Angela Y. Walton-Raji at 12:43 AM

I'm so very proud of my heritage, and my Great, Great Grandfather Chief Ward Coachman.

I too am proud of my Fourth Great Grandfather. The great great granddaughter of Gussie Coachman and Rufus Buckley. The stories I hear from my family are his son Charlie Coachman my 3rd Great Grandfather was an highly educated and amazing man too. My great grandmother Eunice Buckley indicated they called him Uncle Charlie. Those who have reply nice to meet you family.

My part of the family comes from Wetumka Oklahoma. It is good to know about my Grandfathers. The last in my heritage is Cody Dane Coachman. Our grandfather was Albert Coachman married to Abby. They lived east of Wetumka. My father is named Guy Coachman, S/Sgt from the Us Air Force. I have 2 brothers, Aaron and Mark, now passed, miss them greatly but our Creator has them now. I have a sister, Sharon and a much younger bro, Alan Washington. It is just good to know about our family. Mvtos for the insights about us.....