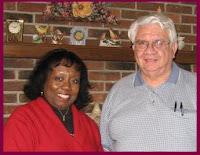 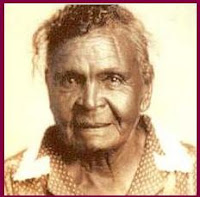 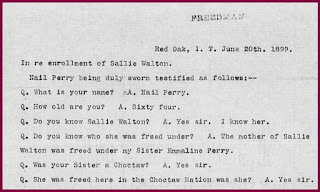 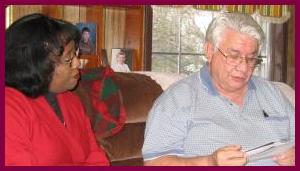 Meeting Nail Perry Descendant Colin Kelley
Photo taken by Tonia Holleman
I think about that meeting often, and I am especially appreciative because it was he who found me. There are many stories of African Americans who have met the descendants of slaveholders. This meeting however, was historic---it is probably one of the first meetings of a Native American slaveholder descendant who on his own initiative, reached out to one whose ancestors were enslaved in his family. We did meet, and yes, history was made on that day.
On this day that we honor a man who had a dream that such meetings were possible, I think that not only are such meetings possible, but so are so many more good things possible! I am so glad that Dr. King had a dream and  he expressed his dream to the world.
Posted by Angela Y. Walton-Raji at 12:39 PM

Angela, this is so moving. Your grandmother sounds so lovely too. Grandmothers are so important!

Thank you Martine! Yes indeed grandmothers, and gr. grandmothers are such treasures in our lives.

Thank-you for this post. I can only imagine the emotions. ((((hugs))))

This is a beautiful post!! Very emotional!! What a true honor it must be to walk in the spirit of your ancestors. This is a story that gives hope for healing.

Greetings I find that this is the goal and objective of what we all can strive to achieve today. With all being told we learn that indeed Social Media can draw us closer. This is a teachable moment which I look to present to others with your approval.

Hello,
Thanks for your comments. I would love to hear about your teaching project. Email me at AngelaW859@aol.com
-Angela-

I have a problem. My Great great grandfather was Native American. I have his name but can't find anything on him. My Grandmother and Great aunt who lived to be 91 and 101 years young would go and stay with their grandad often and told be about him. I tried to use Ancestry.com and even took the DNA test which confirms what my family told me. Angela, IT IS DRIVING ME CRAZY!!! :) It is as if he is invisible; dropped from the face of the earth! I live in an area that is surrounded by Cherokee, Cawtawba, and Lumbees. I am thinking the last name was changed because there is nothing under the current name. What suggestions would you might have? Thank you so much!

Hey my name is Erika I'm from north Carolina but live in Philly. I had a dream last night that my ancestors told me i a African Cherokee. I start researching it but it's not alot I can find. One article said most Indians have high cheek bone and that there middle toe is longer than the big toe and they love being barefoot and all of them I have but it could just be a in my head but my dream just felt so real. What can i do to find out

Dreams are fascinating, but they are not a key to genealogy. Hopefully you have an interest in your history in general and are not interested specifically in one single ethnic group. You are here because of all of your ancestors and you live within another cultural context that has shaped who you are.

Also there are many myths about cheekbones, and other racial features. (The toe thing is new to me. That is NOT an indicator of a background of Native American ancestry.) Complexion, hair texture--including cheekbones etc is not genealogy and those features are simply physical descriptions.

The best way to document your family history is to use standard genealogy methods--vital records, census records, and some records unique to specific tribes---BUT you do not jump into Indian records first. You begin with yourself, and work back. Document the family line with birth/marriage/death records. Start with the 1940 census and work back. And yes----Native people WERE documented in the census as far back as the mid 1800s.

I encourage you to join an online group for genealogy that can assist you with the research, but leave the dreams alone--whoever is in the family line, will be found with standard genealogy research.

There is a useful group on Facebook, called Afrigeneas Community. Start there and ask questions. People are there to help you. But begin with the people---not physical descriptions of ancestors--their hair, complexion or shape of their foot will not assist you. Put some names and places on your initial query and you will have someone assist you.