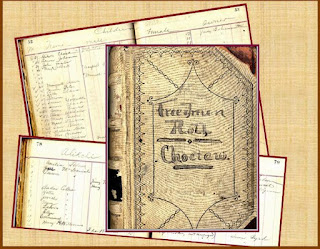 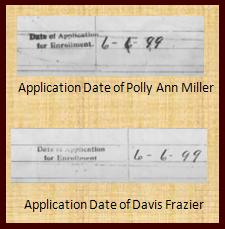 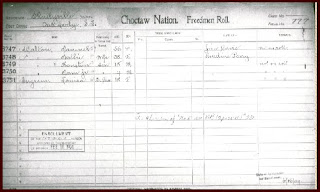 The same Walton family appeared also on the first draft of the Freedman Roll
The early draft is also useful, as they occasionally contain notes about the family or in some cases the slave holder and their estate. In the image above there is a reference to J.D. Davis and his heirs. On the official Enrollment Card, the slaveholder is simply listed as Jim Davis. This small difference might provide a small clue to another record set that may hold data with further research.
Although the genealogical data presented on the First Draft Roster of the Freedman Roll, will rarely differ, it is still useful to see the names of the approved applicants on the that first draft roll. It would be this roll upon which subsequent decisions would also be made.
As genealogists we must look for all possible resources, including early drafts of the Final Rolls.
* Sophia Perry was the mother to Nail Perry who would frequently vouch for the Waltons and the inter-related families.
Posted by Angela Y. Walton-Raji at 8:29 AM

There is/was another very interesting aspect to that Choctaw Freedmen 1896 "citizenship" census that bears mentioning.

On may on the earlier entries of Choctaw Freedmen their "tribal enrollment number" is including in the census.

This provides additional proof of their citizenship in the Choctaw Nation. Their enrollment numbers on this document and their Dawes Card continues to illustrate how the Choctaw Freedmen descendants are being marginalized when the history of the tribe is told today.

A wonderful combination of using original records to tell an important story. Thanks Angela. GREAT!

Thank you so much, Mark!

I am from Vermont, and I am a member of one of the unrecognized bands of the Abenakis. I recently had my DNA tested through 'Ancestry By DNA". From my geneological research, I had expected my test results to show I was about 25% native american. I was quite surprised to find out I am 25% Sub-saharan African, only 3% native american, and 72% European. I was talking with someone shortly after I received the test results, who knows someone from the Swanton, Vt area. She was told by this person that apparently during the late 1800s and early 1900s there was ALOT of inter-marrying between the Abenakis and african-americans. I think if alot of Abenakis in the Northwestern part of Vermont had their DNA tested, they would be surprised like I was to find out that they have African ancestry as well as Native American.
I love doing beadwork. When I found out about my african ancestry, I ordered a book on Zulu beadwork. The Zulu tribe are from South Africa. Their beadwork techniques are unique from any other types of beadwork in the world. I feel like I have been given a wonderful gift. :)

Cuz Dick and I have been looking for a list of Nail Perry's slaves for some time. He will be glad to get a copy of this article.

This may sound stupid, but did this census include any people who came from Mississippi? Thank You.

If you want, you can send the info, if you have any back to my email, seekingtoledo@gmail.com. Thank You

This particular document did not include Mississippi Choctaws. Some of the older members may have been born in Mississippi, but this was an Indian Territory document.

Thanks for the info. You have a very interesting website and blog. As to the myth of the "Indian Ancestor", you said on the website that in the state of Virginia that information can be obtained brom WWI draft cards. I had a great-grandfather who filled out his card by checking both black and indian. This was a surprise because previously I had been told he was half-white. When I showed the card to my relatives, they started screaming it was a typo because there are no indians in our family. How likely do you think it was a typo? In 1900 and 1910 Census, he was listed as mulatto. Unfortunately, there isn't any more info thanks to Plecker's Laws and nobody in the family since then will talk about genealogy.

Hello Colin, I will be curious also to know if the Thompsons were connected to Nail Perry. I see that Charlotte Thompson was the slave holder of Anderson Thompson. Was Charlotte possibly connected to Garrett Thompson, whom I believe was also connected to Eliza? Just wondering....

Hey Angela. I'm also a descendant of freedmen of The Choctaw as well as a possibly a blood member of the SAME that held a line of my family as slaves. I was enlightened yesterday by the fact that The 13th Amendant DID NOT free the slaves in Indian Territory and it almost 20 years before my anceestors were granted citizenship into the nation. I have Dawes card imfo and all. Is there anything eles need to help my search for more knowledge on my Native roots.