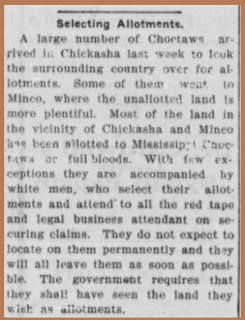 The primary purpose of the Dawes Application process, was to determine eligibility of citizens of the Five Tribes, to receive land allotments. The applications and interviews reflect the process that citizens went through, in proving that they were eligible for land. Once all lands were allocated the remainder of lands would be available for settlement for those entering Indian Territory and becoming citizens of the soon to be state of Oklahoma.

The formerly enslaved populuation---the Freedmen were part of this process and their applications for enrollment as well as their applications for their land allotments are among the thousands of files to research.  And all of the various categories of Indians in the territory are reflected.  Among them are Cherokee, Choctaw, Chickasaw, Creek and Seminole citizens By Blood, Freedmen, Intermarried Whites, New Borns & Minors. AND--- a seldom mentioned category is that of Mississippi Choctaws.

Article 14 of the Treay of Dancing Rabbit did provide the opportunity for persons to remain in the state of Mississippi and become citizens of the United States. However, it is not mentioned that many also went through the same Dawes enrollment process, and they did receive land allotments. Many ended not only proving eligibility for Indian Territory lands, but also selected lands around Ardmore, Tishomingo, and Chickasha and Minco areas.  An article in an Ardmore Oklahoma newspaper covered the time when many of the Mississippi Choctaws actually arrived in the Territory to make selections of their lands. Though their presence was said to have been a temporary one and was expected to be so, some of the allotment records indicated that there were cases were lands were selected, and were inhabited later by those deemed eligible. 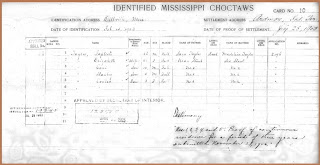 This Mississippi Choctaw Card reflects an approved applicant and note on card illustrates a presence in the Ardmore area an no return to Mississippi.

There was an original process that applicants went through as well, and many applicants also had cards reflecting where in Mississippi they had lived before selecting lands in Indian Territory. In this case, the same individuals are reflected on this earlier card.

The family however, went through an extensive process, although they had just arrived in the Territory.  They settled around the Tishomingo community, and although the family was identified as a Mississippi Choctaw Family By Blood, they lived within the same community occupied by many Freedmen families from the Territory. 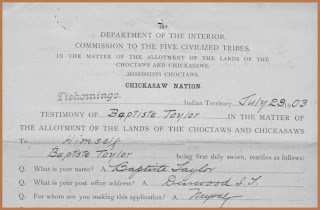 Document from Allotment File of Baptiste Taylor
The records whether for enrollment, or for land, reflect much about the past. Those who lived near our ancestors are part of that story, and in many communities, relationships, friendships and associations occurred across color and cultural lines. All of the people in the same communities, are a part of the story.

With time, more stories of African & Native ties from the very communities that were so diverse will put all people on their appropriate historical landscape.