As pointed out in the first post in this series, the first enrollees in each category were often persons of influence. We saw in the enrollment case of John H. Ross, from the Cherokee Nation, that a former slave of Chief John Ross was the very first case heard by the Dawes Commission among Cherokee Freedmen.

With Choctaw Freedmen, the process began in the Ada/Stonewall community for Choctaw Freedmen. However, it is fascinating to note that the persons enrolled on this card did not have the lowest roll numbers. Simon Clark applied on behalf of his family, but one will notice that the final numbers assigned to them were a much higher number, than the 1 through 5 respectively. That is because his case was contested for a while before a final decision was made on the enrollment of his family.

Notation made on Enrollment Card #1

Nevertheless, Simon Clark was a man of influence in the mostly Chickasaw town of Ada where he lived. Though his Dawes Application was that of a Choctaw Freedman, he lived in Chickasaw country in the years after the Civil War.  His influence and status in the community came from the fact that he was also a Civil War soldier.  He was a known freedom fighter, having achieved that status during the war, in the years before freedom was granted to slaves in both tribes, Clark had seized his own freedom and enlisted in the Union Army.

For Choctaw and Chickasaw Freedmen enlistment was not a common as it was for Cherokee and Creek Freedmen. That meant having to travel through hostile country before making it to Kansas to enlist. But Simon Clark, along with a cousin Aaron Newberry and others did make it to Kansas, an enlisted. 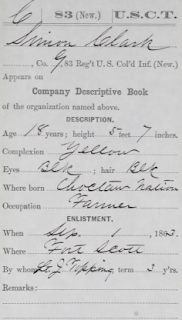 Clark had enlisted in the 2nd Kansas Colored in Ft. Scott, Kansas. The unit was later re-designated as the 83rd US Colored Infantry.

In his enrollment interview, Clark explained that he was originally enslaved by Bob Cochran and upon the slaveholder's death, he became enslaved by Cochran's widow, Jincy Cochran. Although his interview was one of those "summarized" interviews that occurred frequently in Chickasaw County, there is still useful data to be found in the small packet. 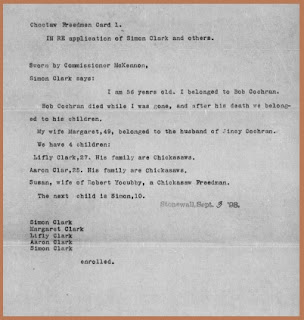 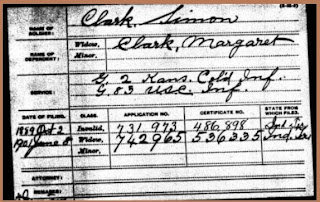 Clark died in April of 1901, verified by his daughter Cornelia Clark. 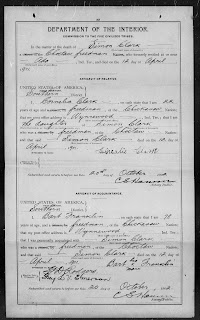 There is more to be told about Simon Clark and an upcoming trip to the National Archives, will involve examining his Civil War pension file.