In 1866, Creek Treaty Abolishing Slavery Was Covered in National Press 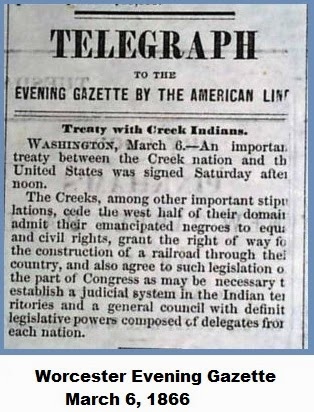 After the Civil War ended a series of treaties were signed with the Five Civilized Tribes to officially end slavery in Indian Territory. A treaty was signed with each tribe, and the treaties are referred to as the "Treaty of 1866."

Slavery was abolished in the United States in 1865, but there was much resistance in Indian Territory to end the practice of black chattel slavery. As a result, the Indian slave holding tribes were each required to sign a treaty abolishing slavery. There were also expectations that the formerly enslaved people would be adopted into their respective tribes.

One can also see that there were other parts of the treaty that pertained to railroad passage rights which would make eventual westward expansion easier in future years. Additional stipulations in each treaty involved the establishment of a judicial system and references are made to the unfolding of such a system in each tribe.

In some parts of the country, signing the treaty made national press. The article above was taken from the Worcester Evening Gazette  in Worcester Massachusetts from March 1866.

Those researching Indian Territory history will benefit from studying the stipulations of the treaty of each of the Five Tribes.