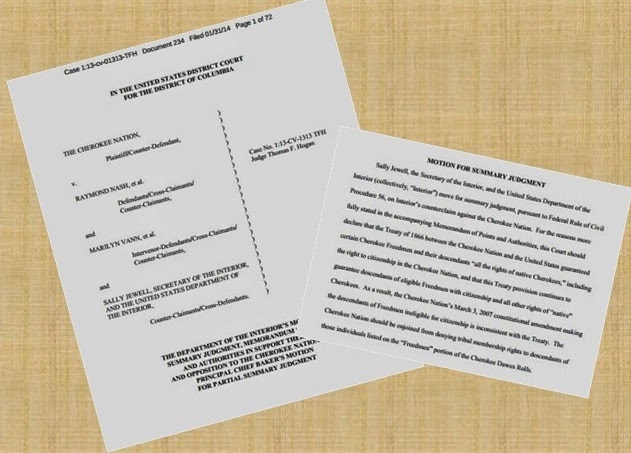 Oral arguments pertaining to the status of Cherokee Freedmen originally scheduled for April 28th were moved to Monday May 5th at 9:30 am. This is the case filed by the Cherokee Nation against descendants of their former slaves, known as Cherokee Freedmen.

At issue will be issues pertaining to the Treaty of 1866 where the former slaves of the Cherokee Nation were adopted and were given full status as citizens of the tribe. These issues emerged again in the mid 20th century as the Cherokee Nation (and the other tribes that signed their respective treaties) enacted new laws excluding descendants of Cherokee Freedmen.

From decade to decade in the 20th century, issues arose with freedmen and their rights being honored, most frequently, in the Cherokee Nation. In the 1980s there was the Nero Case. In 1983, when Rev. Nero went to vote in a Cherokee election as ge had in the past, he and his family and other companions learned that the laws of the Cherokee Nation had been changed to exclude them. However, they had voted in previous elections including 1979. But the tribe had quietly changed the restrictions and the elderly Nero learned that he was no longer wanted in the nation, that he always assumed was his nation by birth.

In the 1990s there was the Bernice Riggs case. She challenged the laws banning the Freedmen and filed in Cherokee court, and it though it took years for a decision to be made, it was initially decided against her, but then it was reversed when the Supreme Court of the Cherokee Nation reviewed the case, and decided that the Treaty of 1866 was still valid and Mrs. Riggs and other were indeed citizens of the Tribe.

Many enrolled, and the action of the then sitting chief was swift, when it was decided to put the admission of Freedmen to the tribe to a vote by the population. And as the votes were cast, it should be pointed out that this was an election in which 3% of of eligible Cherokee voters participated, The result was to remove the Freedmen from the tribe. This was followed by lawsuits and counter lawsuits. The Vann case emerged, initiated by Cherokee Freedman leader Marilyn Vann, and it was followed by a counter suit from the tribe and the case left Oklahoma to emerge in Federal Court.

And the latest chapter of this ongoing saga will unfold tomorrow in Washington DC at the Federal Courthouse on Constitution Avenue NW.

But this saga has a long history, stemming from the Treaty of 1866, and the various acts to exclude persons of African ancestry from participating in the tribe, which was part of the only nation that they knew as home, and the tribe which their parents and grandparents had lived, toiled and died as slaves.

Interestingly 100 years ago, the same issues were there and can be followed in the press from multiple states. 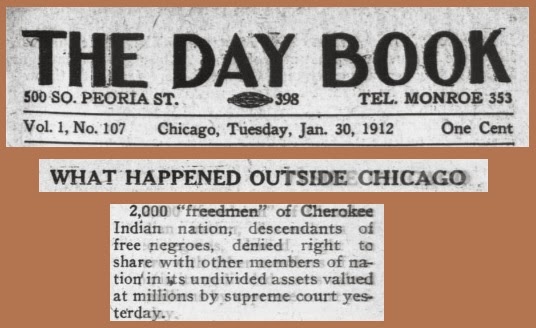 And looking at the press from Oklahoma, one sees other headlines also similar to the issues of today. Note this one from 1906. 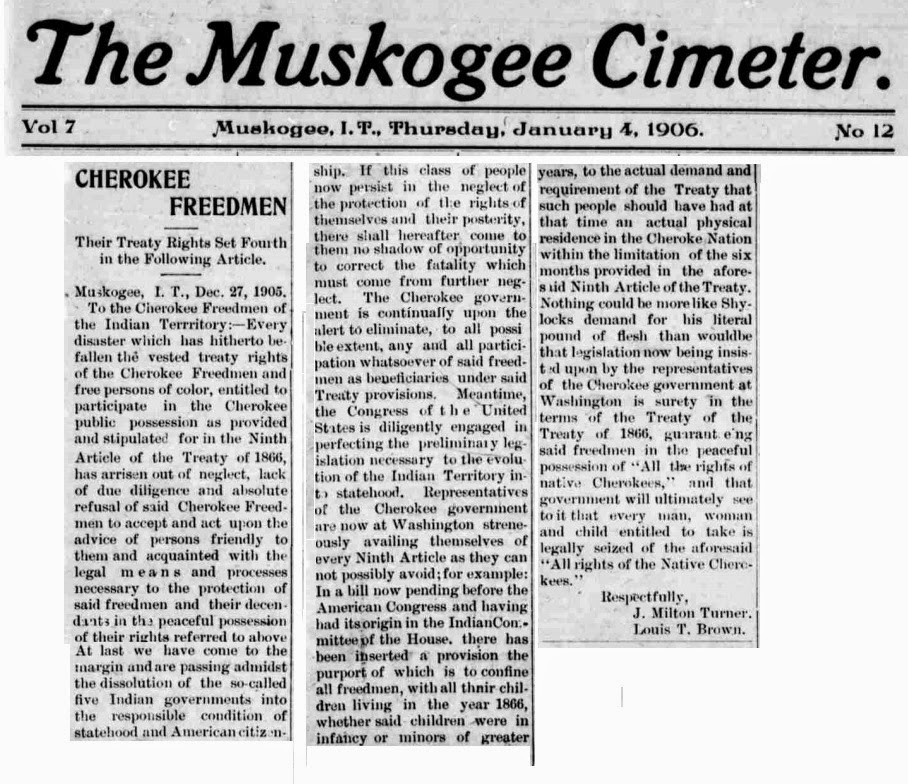 So the issues are not new, and it is truly amazing to see that an issue that began in the 19th century is still being heard in the 21st century.

Many arrived in Washington on Sunday, including Marilyn Vann named in the suit, and in attendance at the hearing will be Cherokee Freedman advocate David Cornsilk, and several Cherokee citizens, and representatives from Cherokee Freedmen,Creek Freedmen, Choctaw Freedmen,and others.

And so it continues. The oral arguments will be heard at the Federal Courthouse at 9:30 am at 3rd and Constitution Avenue NW, in Washington DC.


"Sometimes what is news is not always new."