In the Press: Creek Freedmen in the Dawes Era

(This is part of a series of articles that I shall devote on this blog, to Indian Territory Freedmen. Many newspapers throughout the region frequently carried stories about Indian tribal Freedmen, and these publications can be useful tools for researchers seeking more of the greater story.This is also a companion series to Gems from the Black Press found on another blog, My Ancestor's Name.)

Source: Daily Ardmorite, August 23, 1898, p1
Both 19th and 20th century newspapers reflect much local history and I continue to use them as tools to tell more of the story. Sometimes the story can also be reflected in the press from the local territory. In 1898, the daily paper from Ardmore Oklahoma known as The Daily Ardmoreite, contained an article about Creek Freedmen. In this particular article, references to the earlier Dunn Roll of 1867, are made, noting the growth of the population of Creek Freedmen from the time of freedom to the time of the Dawes Commission. 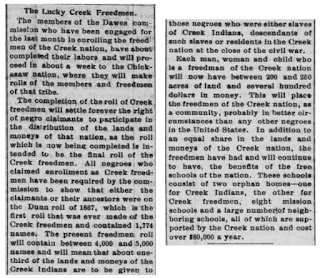 Interestingly the article also makes a reference to the education of Freedmen in the Creek Nation. The "orphans home" that was mentioned was actually Evangel Mission, which today is the home of the Five Civilized Tribes Museum. The school was a Baptist Mission, and was established in 1883. (Note that in 2011 I wrote a detailed article about this school on the blog.)

Throughout the years, especially during the era of the Dawes Commission, articles about Indian tribal Freedmen appeared in the press. In 1904 an article from The Muskogee Cimeter described the last "rush" for Creek Freedmen to get on the rolls. 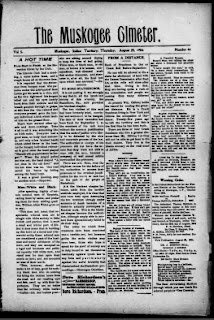 (A Closer View of article) 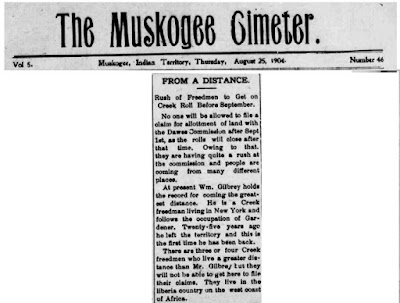 News in Other States

Many publications in the Territory as well as in the United States frequently addressed the acquisition of land. From Missouri, an interesting article can be found in 1904 as well, and this article addressed the fact that many lands of Creeks were being swindled away from the land owners. The St. Louis Republic reported that more than 150,000 acres had been sold away from the original allottees. 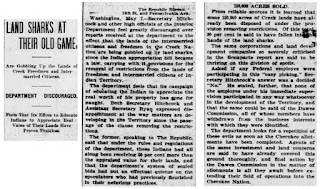 Though not directly genealogical in nature, articles from late 19th century and early 20th century can reflect many events and can assist researchers in enhancing the family story. By sharing the challenges that Dawes enrolled ancestors faced both during and after alltments, a better version of the family story can be told.