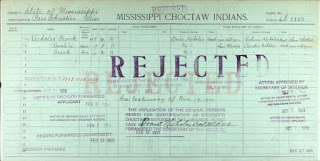 The rejected files of the Mississipi Choctaw (MCR files) reflect rich data for family history and those with ties to Mississippi, and who have heard that there are family ties to Choctaws, and to Choctaw communities, will find that this record set could yield some amazing data.

Do not be dismayed that this information comes from a record set marked "Rejected". There are many reasons why an ancestor's history could be found among these records. Some of the reasons are cultural, some political, some historical and some social. All of the reasons were used with the MCR files, and vary from one file to another. But it should be understood that these records were created by persons in the late 1800s, and early 1900s who stated that they had Choctaw family ties, and many of them provided remarkable family information. Regardless of the reason for the final outcome of the case the status of the family record among the MCR files should not prevent the family researcher from exploring the files.

In the case above, the application was for Frank Nicholas, and his children Rosaline and Frank Jr. They lived in Pass Christian, Mississippi.

The Dawes Commission interview went into great detail about the family background and sought to determine how the Choctaw blood was part of the family history. 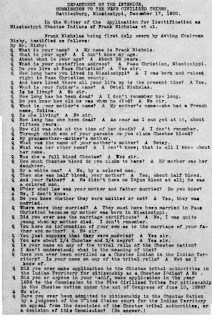 In this case the detail extracted from the applicant went into detail about the source of the Choctaw ancestry. The applicant was examined as to whether claim was being made under Article 14 of the Treaty of Dancing Rabbit. This line of questioning was common among most cases in the MCR category. In this case the applicant repeated what had been told to him most of his life about his own ancestry. 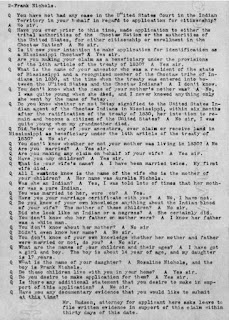 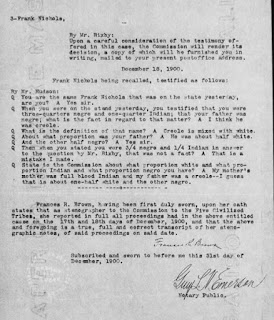 The application jacket for this family was closely connected to additional files, it is imperative that all of the files are combined to glean thorough information about the family. From the same files for Frank Nicholas, references are made to additional family members who also submitted applications. 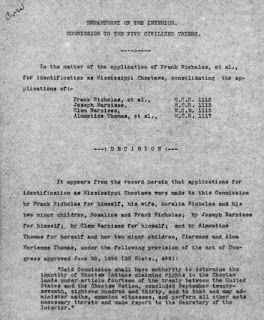 After analyzing the cases of the additional relatives it was decided that there was not sufficient evidence to prove the Choctaw connection, since there was no attempt in earlier  years to be enrolled as Choctaw citizens.

In spite of this decision--it is also clear that an unexpected gem awaits the researcher. In the course of the many interview questions, careful notes were taken on the case and this was one of the cases where a hand drawn, multiple generation pedigree chart was included. For any researcher this is a real treasure to find. Because of the complex questions asked, additional names of relatives and they were included in the Frank family file. 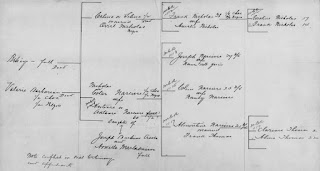 Multiple generation pedigree chart in file
Source: Same as above

It should also be pointed out that there are over 35 pages in the family file. These pages along with the files for the additional family members are extremely valuable in piecing together the family narrative.

Regarding the family tie to the Choctaws, there may have truly been one, with the evident mixed race ancestry of the family, but because the cultural ties had long been cut, this particular family was not officially identified by the Dawes commission, and was thus placed among the MCR files. Thankfully, the family data will still direct the researcher to the family members, and from that information, more of the family story can be told. 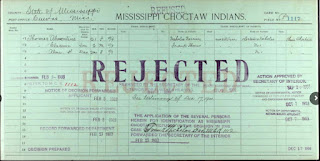 All files shown above are from National Archives Publication M1186 and all persons mentioned on the above enrollment cards have ties to the same family as Frank Nicholas. There are accompanying application jackets (M1301) and all will hold some unique facts that will be useful to the researcher.

It is strongly recommended that persons of Mississippi ancestral ties explore these records. The images of the enrollment cards reside on Fold3, as well as Ancestry, with the Ancestry images presented in color. (The application jackets NARA publication M1301, are only in black and white on each site.)

There are more than 7000 MCR files and a first examination of the MCR files indicate that over 2000 of them reflect African-American families stating family ties to Choctaws of Mississippi.
Posted by Angela Y. Walton-Raji at 8:32 PM

Great article! Narcisse, Barabine, Nicolas, Molaison, all good Creole names from along the Gulf Coast. This is an interesting family history. I'm going to search the records for my people from Clarke and Wayne counties.

What a great resource. If only my ancestors had USCT pension files and refection records like these! So much information.

I want to let you know that your blog post is listed in today's Fab Finds post at http://janasgenealogyandfamilyhistory.blogspot.com/2016/03/follow-friday-fab-finds-for-march-11.html

Have a great weekend!

This is very interesting information on my grandfather, I've always wondered if the stories were true that we were IN FACT Indian.

I am currently researching this and I have my great great grandfather who was the lawyer/agent for the Choctaw nation. He was wrongfully accused of signing up Negro Choctaw people and was rejected. On April 2,1902 he spoke before Congress on these issues. His application was REJECTED even though I verified the Treaty of Dancing Rabbit Creek his identified ancestor and he held the land certificate during his hearing which was handed down to him during before the Great Removal.

Also, he is a Mississippi Native and traveled to Louisiana, Alabama.