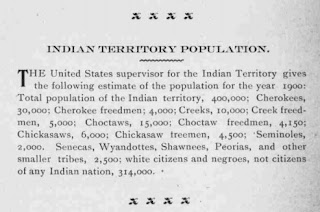 Often I am asked the very same questioned...how many freedmen were there? Its a very complex question with no simple answer unless you ask for a specific year in questioned....slaves and free people of Color before the Civil War, freedmen just after the Civil War who made claimed to citizenship? Which tribe? Freedmen during the reconstruction years? Freedmen during the time of the Dawes commission and would this include the new born and minor accepted under the Act of April 26th...or would it go deeper and include Creek Nationals for example who were not considered freedmen under Act of April 26th found under the JW Dunn roll of 1866, but cast on the by blood rolls...a very complex question, unless you just want a guesstimate of all Black folks in Indian Territory wither classified as Indian or Freedmen....Eli Grayson

Sorry one other thing...JW Mackey, Indian Agent to Indian Territory just after the Civil War in his report to Washington did say on May 19th, 1866 that there were some 10 to 12 thousand Negroes in the Five Nations....Eli

My ancestors were Black Indians with the surname Hughley.

Most did not remove to Indian territory but remained in Chambers county and Tallapoosa county Alabama.

Thanks to the Freedmen rolls, we are able to go further back in history. Our family was owned by Katie Grayson in Mayes County, OK.

If anyone has information about the following families, please share: Ross, Harlin, Grayson (former owner Katie Grayson), and a Nave who fathered two children of Lorena Ross between 1900-1910. I'm also interested in info about Sugar George. His name was mentioned in an application.