In April of 1999, Dallas Pitchlynn, of Eagletown, Indian Territory, appeared in front of the Dawes Commission on behalf of himself, his children and two of his grandchildren. His children were Victoria, Garfield, Louis and Fannie, Medora, and the two grandchildren were James Walker and Tommy Pitchlynn. Later a note added to the card points out that Medora died in 1900 and James died in 1901.

Dallas Pitchlynn was 54 year old at the time, thus, was born in 1845. He was enslaved by Peter Pitchlynn, who would later become principal chief of the Choctaw Nation. 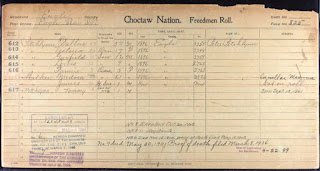 
The National Archives at Ft. Worth: Ft. Worth, Texas USA; 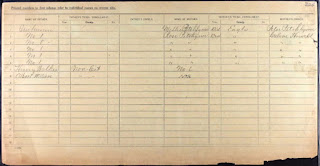 
Source: Same as Above

The interview process was a short one, and there did not appear to be controversy about the enrollment of the family. 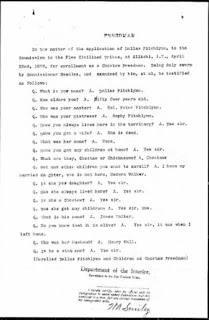 As expected the usual records are found in the allotment jacket applications, along with plat maps, memos and letters. A few samples are presented here. 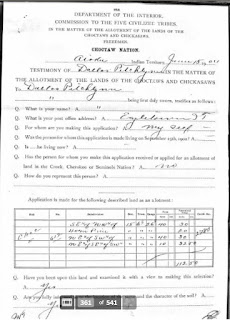 Apparently the heirs of Dallas Pitchlynn did not appear on October 20th, and a preliminary ruling referred to the non-appearance, because the addresses of the parties was not known. A first ruling by the county judge stated that they (the family of Dallas Pitchlynn) were in default, 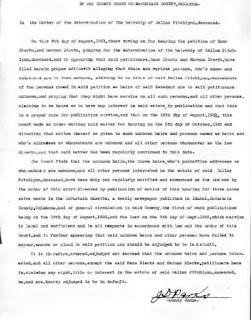 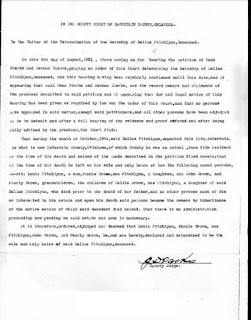 It is not known what the eventual outcome of the case was. Did they retain their land for much longer? Did the family eventually leave and migrate away from Oklahoma? Did the Dierks ever own or occupy that land after the lawful heirs of Dallas Pitchlynn were located? Did the Pitchlynn descendants ever occupy the land themselves?

These questions may or may not be answered, but there is a story nevertheless, of life, legacy and land that deserves to be explored. Hopefully the descendants of Dallas and Rose Pitchlynn  did prevail and they were able to pursue life's goals and that they were able to continue life's journey with success, land ownership and prosperity.

**********
This is the 22nd article in a 52 article series devoted to sharing histories and stories of families once held as enslaved people in Indian Territory, now known as Oklahoma. The focus is on the Freedmen of the Five Civilized Tribes, and these posts are part of an on-going project to document 52 families in 52 weeks.

Hi Angela, I'm curious did you find an index to the probate records?