One of the more intriguing stories of identity, race, and heritage comes from the story of two brothers, born in Indian Territory. Their story on the surface appears to be a simple one where an elder in the family registered her grandsons with the Dawes Commission. She had been enslaved in the Chickasaw Nation and was doing what many people did during the years of the Dawes enrollment process. She registered her family. The saga Joe and Dillard began when they were first enrolled and place on the rolls of Chickasaw Freedmen.

However, what emerged was a story that mirrored that of many others in Indian Territory. The two Perrys had a mother of African Ancestry, and their father was native American--Chickasaw Indian. The story is unique because the parents of the two young men had a true relationship and had planned to raise their family together.

In 1892, Charlie became ill and died, thus leaving Eliza with her two boys to raise alone. Having an extended family that was quite large, Eliza received support from her mother Harriet, and it was Harriet the matriarch who appeared and enrolled the children. They were enrolled along with a large clan of other family members on Chickasaw Freedman Card #61.

On the front of the card, one can clearly see the names of the two grandchildren whose cases would later be challenged. Joe and Dillard have roll number 267 and 268. Because of the controversy, one can also note that an asterisk was placed near their numbers. 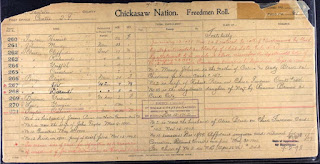 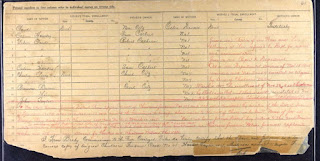 Reverse side of card

This is clearly a very large family and much rich genealogical data is found on the card, reflecting the spouses and children of those represented when the grandmother enrolled them. On the top card above the names of Joe and Dillard, is the name of their mother Eliza. Eliza would later be the one to request that her sons be placed on the Chickasaw roll by blood. 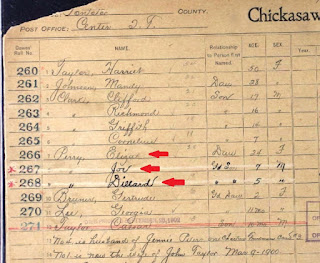 Close Up of Data on Card


The back side of the card also revealed the name of the Joe and Dillard's father Charley Perry, who was, by that time, deceased.

Close up on reverse side of card

Before looking at the application jacket, this case is one in which much is revealed in the various details found on the card itself. Some of the notations added after the initial interview are noted in red and they reflect various actions pertaining to the two young boys and how the commission acted upon them.

The back of the card contains more data about changes in their status. It should be noted that they originally began the process in 1898, when the grandmother appeared to enroll all of her children and grandchildren. Then the mother Eliza began a suit, because her husband was Chickasaw, by blood and she wanted them to be recognized as such. A decision was made in 1906 (see note below) to cancel their status as freedmen and transfer them to the rolls by blood.

An important footnote is written in red on the bottom of the front side of the card, directing the reader to a change in status for Joe and Dillard Perry, cancelling their status as Freedmen.

When they were transferred to the blood roll a card was completed for them as Chickasaws by blood. And as one can clearly see from the blood card---it was quickly canceled. 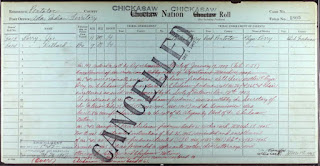 And one can tell by the notations on the front of the card how their case evolved. And the large stamp of course reveals a later decision as well.

(Notations on card - close up)

(Additional Notes on back)


From both the card "by blood" and the "Freedman" card it is clear that this was a complicated case. But then so much more about the case emerged when reading the application jacket. The details about Eliza, her marriage to Charley Perry, and the subsequent cold treatment by his relatives toward her are also reflected.

Several pages from the series of interviews are presented here. What emerges is the fact that Charles and Eliza had a relationship and had begun living together. But marriage between an Indian and one of African ancestry was forbidden by law and threat of punishment. As it turns out, Charlie and Eliza were arrested for cohabiting and were taken to Texas. Their crime? She was black and he was a Chickasaw Indian. It was pointed out during one of the interviews that she was also one quarter or one eighth Indian, however, the presence of African blood in her veins somehow in the eyes of the Chickasaw community and policy put a "stain" on the public perception of the couple and their right to have lived as husband and wife. Their marriage made their act of having a relationship with each other, a crime.

They had two children Joe and Dillard, and some of the witnesses from the Perry family said only that they had "heard" that there were two children, but had never met them. It was later stated that Charlie and Eliza married while in Texas, but another official objected, finding it inconceivable that a "negress" and an Indian would be allowed to marry while in Texas. 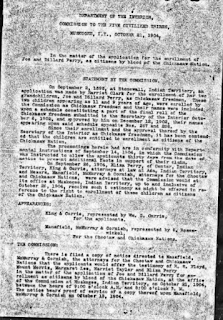 The questioning began addressing the family background of Charlie Perry, and whether the witnesses had knowledge of the two boys Joe and Dillard being his sons. In addition, several people, including relatives all mention that Charlie would go away and live someplace else, for a while, but would only return to they Chickasaw family for short visits. 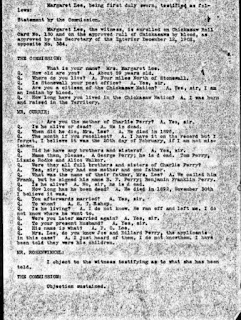 A series of questions were addressed to the witnesses about not only the two young boys being the sons of Charlie Perry, but also several were asked about the mother and whether Charles was mentioned as being married to Eliza. 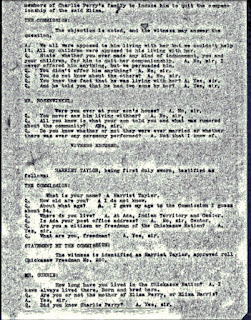 The grandmother Harriet also took the stand and spoke about her knowledge of the case of Charlie and Eliza. Harriet was the grandmother who went and registered the family from the beginning of the Dawes Enrollment Process. 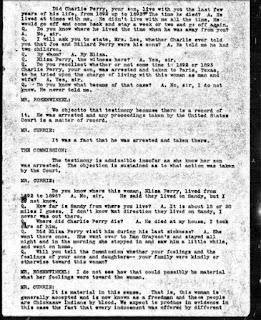 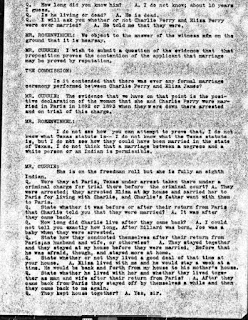 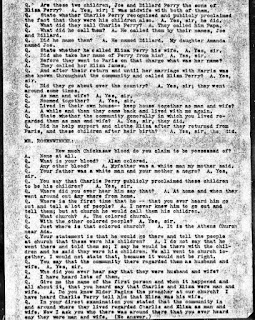 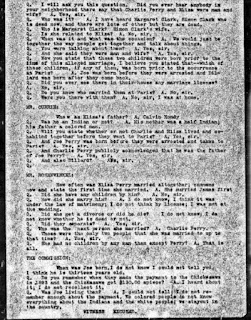 Eventually after much discussion occurred about the status of Eliza and Charlie Perry's marriage, Eliza herself finally took the stand to speak. 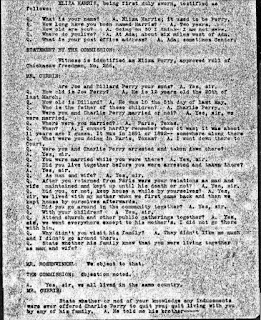 When Charlie became ill, he was at the home of his Chickasaw Family. Eliza did go and visit him while he was ill, but clearly did not stay long for she was not really welcomed while there. Charlie died, and Eliza faced the future years without her husband, and began to negotiate life with her two children.

As stated, their Freedman grandmother originally enrolled them, but Eliza mentioned in her interview that she should consider suing on behalf of her sons, so she did file a lawsuit for the right of her sons to be enrolled as Chickasaw by blood. Their father Charlie, who was now deceased, was, in fact, a Chickasaw Indian. But the children were not accepted by their Chickasaw relatives and they were, in fact rejected by their Chickasaw grandmother, who admitted that she never knew them. There was deliberate avoidance of contact with the bi-racial children of their Chickasaw father, by his family.

The story is a complex one, and in a future piece I shall focus on the genealogy of the larger family of Perrys, Taylors, Johnson, Bruners and other who comprised the structure of this one blended family of cultures, tribes, races and bloodlines. Truly, it can be said that the case of Joe and Dillard Perry continues to be a complex one for genealogists and students of Indian policy, law and sociology.

This is the 23rd  article in a 52 article series devoted to sharing histories nad stories of families once held as enslaved people in Indian Territory, now known as Oklahoma. The focus is on the Freedmen of the Five Civilized Tribes, and theses posts are part on an on-going project to document 52 families in 52 weeks.

Hi Angela, Yes! a powerful Saga the Joe and Dillard Perry Case. As you tell the story its our Story, and so much Eliza had to to go through by DAWES Commission trying to retain the RIGHTS of Citizenship for her boys. As I read that case over I was very digusted at Charlie Perry's mother with her biased attitude. After a little studying I came to find that Charlie mother was a COLBERT the daughter of Major James Colbert. The Colbert's owned Eliza father Calvine HUMDY enslaved by Samuel Colbert and they were sibling. Now we have Calvine Humdy a part Chickasaw man his mother Lydia Colbert, and her mother Zelphia Colbert part Chickasaw and the daughter of Thomas Colbert and Thomas the son of Major James Colbert. The the circle is there and not only that they have been cohabitation with those people. Those people joined Betty Legion in Equity 7071. May the TRUTH continue to be told.

Hello Angela,
Great read here. As you mentioned stories like the Joe & Dillard Perry Case, was not uncommon. It reminds me of the case of my great X2 grandmother, Sallie Kimble-Williams (R-22) (1872-1972)who was of Chickasaw Native descent, her mother being full blood Chickasaw. Sallie had applied for the "by blood" Dawes Roll, she was eventually rejected and her children and husband was switched to the "Freedman Rolls" under their father Wilton Williams lineage. Yet Sallie's two blood sisters (same Chickasaw mother) Amanda Abrams, Angeline Kimble-Porter were BOTH accepted on the "by blood" Dawes Chickasaw Roll. Angela are you able to do a spotlight post/story submission here on their case, as well? It would really be awesome if you would. For some reason #437, or #438, rings a bell and Amanda's #1856....please let me know if this would be possible Angela Y. Walton-Raji; thanks!