The Life and Times of Hagar Myers and Family, Creek Freedmen

Though found among the many records of the Creek Freedmen, The Myers family of Muskogee is deeply rooted in the Creek Nation. For John Myers, unlike many classified as Creek Freedmen, his own roots are not planted among that of the enslaved. He was born free as were his parents Harris(sic) and G.A.G. Myers.  For wife Hagar, she was was born enslaved by Sukey Kernal, as was her mother Diana.

The family resided in the Muskogee area, and they belonged to North Fork Town. Both had also previously been placed on the Dunn Roll. Her father belonged to Arkansas town, and her mother belonged also to North Fork town. A previous name of family was Hardage as noted on the back side of the enrollment card. (see images that follow)

In September of 1898, they appeared in front of the Dawes commission in application as Creek citizens. Though free and never enslaved, John and his mother Harriet, also born free, were placed on the rolls of Freedmen, of the Creek Nation. Harriet, John's mother was still living at the time and was placed on the same card.

Harriet was 70 years old at the time and her parents were identified on the card. Her father was John (Jno) Cooney who died during the Civil War, and Harriet's mother's name was Dorcas Hardage. It is noted on the card that Jno Cooney was deceased, as was her mother Dorcas. It is also noted that Dorcas was at one time enslaved by Siah Hardridge. 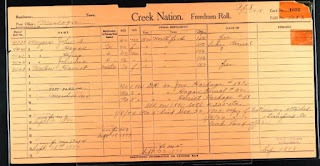 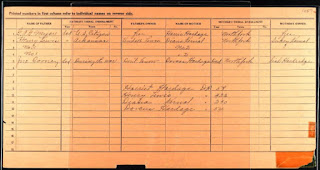 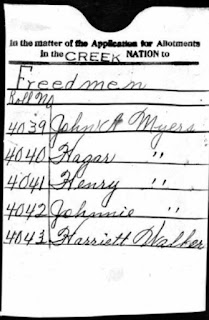 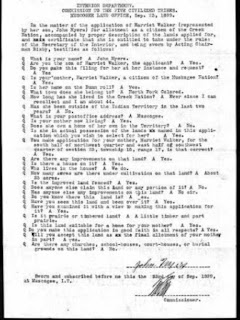 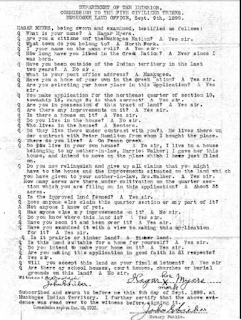 
With all of the challenges pertaining to the Creek Nation and their many missing records, including the application jackets with interviews there are often other resources to explore and with the case of Hagar Meyers, she was considered by some to be a woman whose history should not be forgotten.

The history of Hagar Myers that is not reflected in the documents above were captured in an interview conducted in the 1930, where Hagar was mentioned. According to Scott Waldo McIntosh, who was interviewed in the 1930s as part of the Indian Pioneer Project, an amazing description of Hagar Myers is found. According to McIntosh, Hagar Myers, a Creek freed woman, was possibly the one person responsible for bringing peace during the Green Peach War. 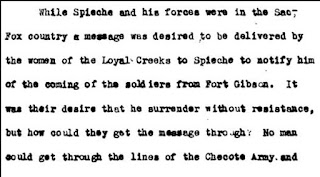 It appears that during the time of the conflict there was a need to get a message to Isparecher (Spieche) that soldiers were being dispatched from Fort Gibson. This is where Hagar's story emerges. 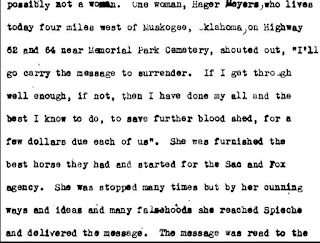 This story is found in the interview with Scott Waldo McIntosh, who was  one of the sons of William McIntosh. He gave his interview to the Indian Pioneer Project in the 1930s and he had been a witness to many of the events that had occurred, in the 19th and early 20th century among the Creeks. The interview, found in its entirety in the Western History Collection of the University of Oklahoma numbers more than 20 pages. He spoke of many things in his narrative, including the contribution to peace made by this simple woman of courage and conviction. 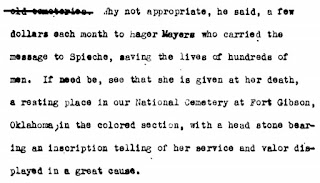 Most interestingly, McIntosh also called for Hagar to be honored and remembered for her bravery and at the time of her death for her to have a special marker and for her grave site to be remember what she died that brought about some of the peace to the area.

This part in Hagar's life is notable and is hopefully one to be remembered by many who are students and scholars of Creek history and that of the Green Peach War.

According to the Oklahoma Death index, Hagar Myers died on January 1, 1941. Little is known of her burial site, but it is hoped that the history and legacy  of this Creek woman, will always be remembered. It is also hoped that the entire Myers family history rooted in both free people as well as in those enslaved by Creeks will be honored and remembered in future years.

This is the 24th article in a 52 article series devoted to sharing histories nad stories of families once held as enslaved people in Indian Territory, now known as Oklahoma. The focus is on the Freedmen of the Five Civilized Tribes, and theses posts are part on an on-going project to document 52 families in 52 weeks.
Posted by Angela Y. Walton-Raji at 1:51 PM

Thanks for the Blog. The information has helped me to fill in the missing pieces of my family tree. I am a direct descendant of Hager Myers. Unfortunately, I do not have any family photos to share. Maybe other descendants will see the blog and share. Hagar Myers is my 2x great grandmother. I never met my grandfather Fernandes Myers who was Hagar's grandson because the marriage between my grand mother ended shortly after my father was born and both my grandmother and father are now deceased so I am trying to put things together to understand my ancestry.

Alicia,
I am Lesa Myers. Great great grand daughter of Hagaer
Are you in Oklahoma?
Please contact me.
Lesa Engram
lesa.engram@gmail.com