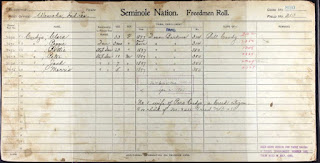 This Cudjo family from Wewoka is a family that can be considered one that is blended, as the mother and children are Seminoles and the father was Creek. In the case of Clara Cudjo and her children, she appeared in front of the Dawes Commission, to enroll herself, her daughter Peggie and her three step children, Bettie, Peter, Jack and Morris. Her husband was Paro Cudjo, who was a citizen of the Creek Nation. Clara was a member of the Dosar Barkus band of Seminoles. The family lived in Wewoka, Indian Territory at the time she appeared. 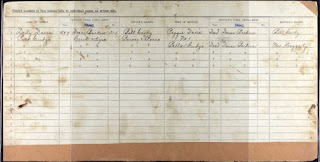 Unfortunately, many of the Seminole interviews, like the Creek Interviews are missing. Some are not labeled correctly, and others are simply missing and detailed files do not exist for many of the corresponding enrollment Dawes Cards. There was a file that contained one mere document pertaining to Clara Cudjo. That one page however is significant, because it points out that Clara Cudjo apparently died before the rolls were closed. 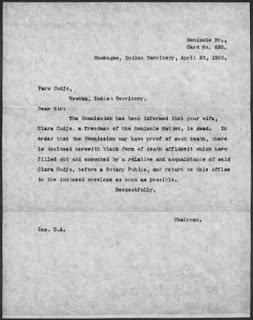 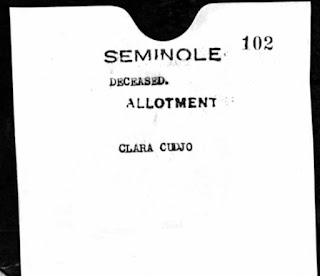 Nancy Davis was a sister of Clara Cudjo, and she appeared in order to make application on behalf of her sister Clara, now deceased. Clara's data of death was said to have been October 10, 1900. 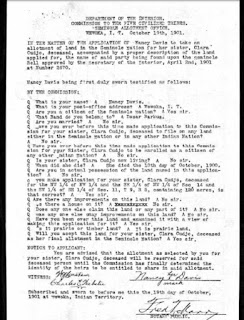 Another interview was also a part of the file, with Paro Cudjo, Clara's husband. Although she was identified as deceased, he was allowed to still appear and make a claim for the land that she was entitled to, had she lived. On that document, traditional questions pertaining to the status of the land, improvements upon the land and the nature of the parcel of land.

It is not known if the fact that there were two applications for Clara's land created conflict or not, or whether rights were given to the husband by default. The remaining documents reflect the presence of the husband in the file, and nothing additional was known of Nancy's application. However, for research purposes, it was useful to know that there was a sister and the family has another name to follow and study, to expand the family narrative. 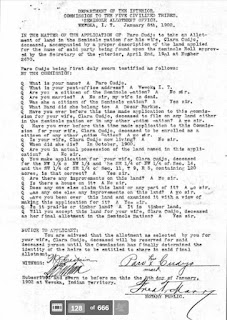 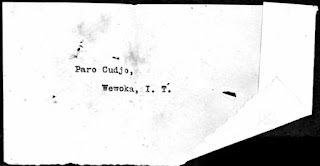 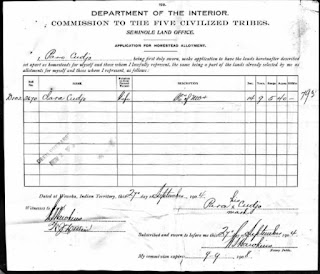 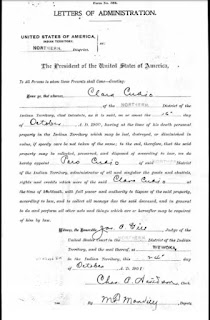 Another questions arises pertaining to the family. What can be learned about Paro Cudjo himself? A search on two databases did not reveal the name of Paro Cudjo. I wondered if he was related to Paro Bruner, but they were not the same families. And Clara's card as well as the land record state that he was a Creek citizen. I also checked the name written as C-u-d-j-o-e, but no Paro Cudjoe there, either. It is not clear who ended up with the land from the documents, and it is not clear who Paro Cudjoe the father actually was. No enrollment card for Paro Cudjo exists, but clearly, the record does reflect his being Clara's husband and father of the children in the household.

With no enrollment card for Paro Cudjo, one might assume that he administered the estate for his deceased wife and that was the end of the story. However, some additional records pertaining to Clara's estate and her husbands status as administrator were found. Among the probate records of Oklahoma some additional records were located. The file was much larger than expected and 18 more pages about Clara's property were located among probate records located on Ancestry.

On one record, Paro revealed that he had lived on the land since Clara's death and that some improvements were made over the time. He pointed out that he had not rented the land to anyone, but he and the family had resided there. But surprisingly there was a challenge to Paro Cudjo having been pointed as Administrator of her estate. It is not clear as to why there was a challenge, but it is clear that a challenge to his administrative status was made. It was recommended that Paro Cudjo not be allowed to continue as administrator of the estate of Clara and her children. The letter appears to be one from a company requesting that the bond be canceled pertaining to the status of Paro Cudjo as administrator. The company was requesting to be removed from any liability pertaining to the claim. It is not clear whether or not this was a technicality or if there was another issue at hand.

Was this an effort to capture the land? It is known that many citizens of the Five lost their land due to many challenges put them in the early 1900s. It is not known if this was the case, or if the Paro kept the land for some time.

However, in 1910 census three years after statehood, Paro, was living in the township of Lincoln, in Seminole County, with daughter Peggie, and second wife Flora. His name was also found on some of the lesser known town rolls from the Creek Nation, but it is not clear why there does not appear to be an enrollment card for Paro Cudjo.

The possibility may be that he could had access to more land by holding on to his Seminole wife and children's assets and as a Creek he may have received only one allotment for himself if he were to enroll alone.

He was clearly present and appeared on the Arkansas Colored Town roll several times in the 1890s, and he was with his family in another Township several years later.

Hopefully the family thrived and continued their life within Seminole Country, and hopefully the short life of Clara Cudjo will be remembered well by her descendants.

This is the 25th article in a 52 article series devoted to sharing histories nad stories of families once held as enslaved people in Indian Territory, now known as Oklahoma. The focus is on the Freedmen of the Five Civilized Tribes, and theses posts are part on an on-going project to document 52 families in 52 weeks.

It's great to see this profile of the Cudjoe family. One of my ancestors has a connection to an Emma Cudjoe. He became her guardian in 1916. In the guardianship papers, she is described as a 25-year-old "incompetent" person, so I'm curious to learn more about her life.