In 1901 Charles Mayfield of Paw Paw appeared in front of the Dawes Commission to enroll his children as Cherokee Freedmen. His name appears on Cherokee Freedmen card #1388. He lived in an area of the Paw Paw Bottoms and he was applying on behalf of himself and his children Emmanuel, Beulah, Royal, McKinley, Nathaniel, and Bennie. He was married but his wife Lizzie was not a Cherokee citizen, and therefore he was not applying for her. 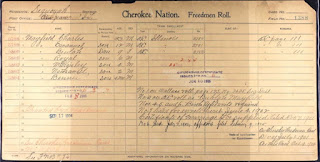 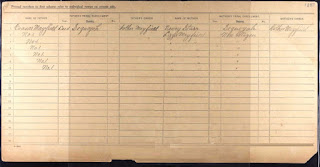 Ceasar Mayfield was the father of Charles Mayfield. His mother was Nancy Starr. Ceasar was deceased at the time, but Nancy was still living at the time, and in fact filed on her own behalf. It will be shown below that their files were merged when the interview was conducted.

Nancy Starr lived in Cottownood, in the Sequoyah District of the Cherokee Nation. She was previously on the Wallace Roll as well as the Kern Clifton Roll of Cherokee Freedmen. 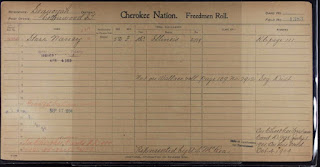 Cherokee Freedman Card #1383
(same as above)

Her parents were Henry West, and Phoebe Mayfield, and both had been at one time enslaved by Walker Mayfield of the Cherokee Nation. (She had been placed earlier on a "Doubtful" card but later, like the other Mayfields was placed on the admitted roll of Cherokee Freedmen.) 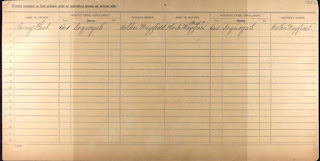 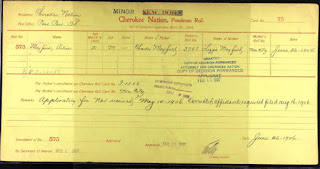 
From the Application Jacket
The application jacket consists of a number of interviews all pertaining to the Mayfield family. Because Charles's mother was still living, she was interviewed as well and the files were merged.  In addition a number of questions pertaining to whether or not they were eligible for enrollment. This is evidenced by the questions regarding their presence in the Cherokee Nation during the Civil War and when they returned to the nation afterwards. To qualify for enrollment they have to have returned in 1866 and there are several questions pertaining to that. Also there were questions regarding their having been enrolled on previous rolls that reflected Cherokee Freedmen. 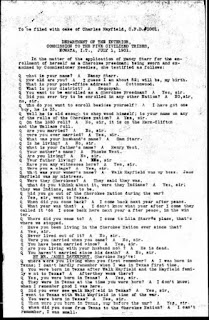 
An interesting series of questions were directed in order to determine fully if the family returned in time. Part of this may be a result of their not having been enrolled on the 1880 roll of authenticated Cherokees. They were enrolled on the Wallace and Kern-Clifton Rolls. However there was some curiosity about their movements that were continually asked. 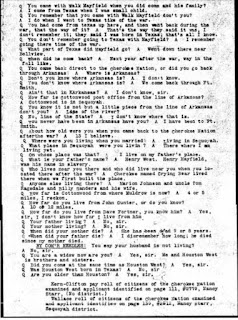 Reading this interview gives an impression that there was doubt and perhaps there may have been an effort to find flaw in her statement. 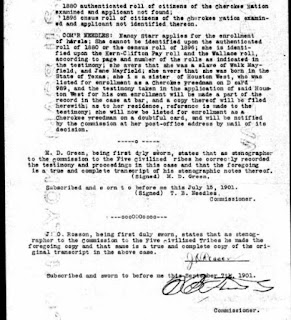 As the interview continues it become evident that a large family clan is appearing around the same time and being interviewed at the same time. Houston West, also related to the Mayfield family and also the son of formerly enslaved people held by Walker Mayfield was interviewed. Houston West was the brother of Nancy Starr, son of Henry West. Again the same kinds of questions were asked and pertained to the slave holder and their movement during and after the Civil War. 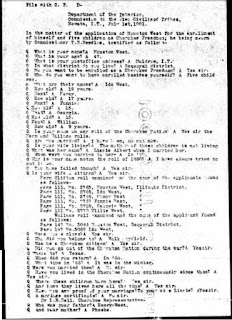 Questions about Nancy Starr, mother to Charles Mayfield were asked, including her parents and whether they had been enslaved by Walker Mayfield as well. It was decided to merge the family of Charles Mayfield, with the file of Nancy Starr, and also of Houston West. All were related and all had a tie to the same Cherokee slaveholder at one time. 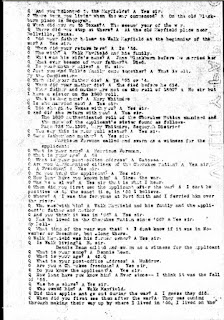 It is clear that there was some doubt felt by the commisioners and many of the questions were asked repeatedly of the applicants. 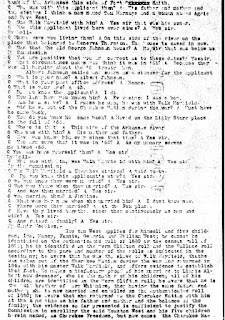 Their application was doubted, and it was decided to hear the case at a later date to present in its entirety. As a result, the family was at first placed on a Cherokee Freedmen "Doubtful" card. 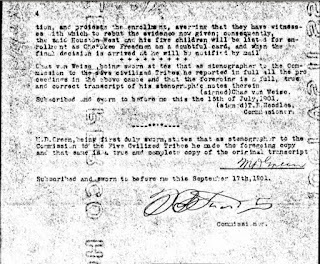 There were other documents such as birth affidavits for the children and one sample is shown below. 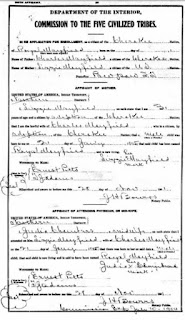 Finally after three years, of waiting a decision was made on this family, as well as on others who had been placed in a state of "doubt" by the commissioners. in October of 1904 it was decided that the Mayfield applicants among others were approved and could be enrolled as Cherokee Freedmen. 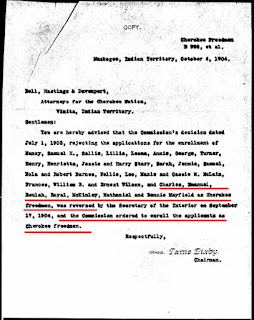 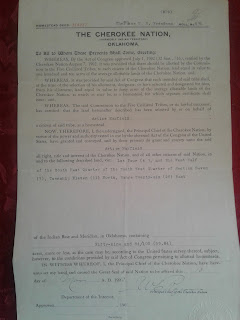 A land record outside of the Land Allotment jackets exists reflecting the young child Artice Mayfield and the land eventually awarded to him.

The record of the Mayfield is connected to the Wests, and the Starrs and other families, all of the Sequoyah District in the Paw Paw Bottoms. There are many other records that reflect this large extended family, and these documents reflect only a portion of them. This is a Cherokee Freedman family strongly rooted in their nation. They survived enslavement, removal to Texas, found their way back to their only home, and they fought to remain in the land of their birth. Their legacy is a strong one, and it is hoped that ties are still maintained among the families, and to the soil from which they come.

This is the 36th article in a 52-article series devoted to sharing histories of families once held as enslaved people in Indian Territory, now known as Oklahoma. The focus is on the Freedmen of the Five Civilized Tribes, and these posts are part of an ongoing project to document 52 families in 52 weeks.
Posted by Angela Y. Walton-Raji at 10:14 AM