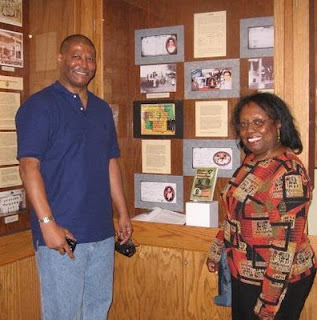 Terry Ligon & Angela Walton-Raji in front of
Special Freedmen Exhibit at Five Tribes Museum
I am currently attending the very first Five Tribes Story conference sponsored by the Five Civilized Tribes Museum, the Oklahoma Humanities Council, and Bacon College.  The conference has several hundred people in attendance, and members of the Choctaw-Chickasaw Freedmen Association, and the new historical association, ITOFHA (Indian Territory and Oklahoma Freedmen Historical Association) are attending as well.
The Five Civilized Tribes museum contacted some of us to contribute to an exhibition for this historic event. Members of the association worked to share photos that told a greater story of Oklahoma Freedmen, and to see that their stories and their presence as part of Indian Territory history was included. A collection of 8 images including a montage of Freedmen from all Five Tribes was assembled and is now on display at the conference.
The display was also on hand the evening of the kick off reception for the conference held at the Museum on Thursday evening.  The images submitted were featured in one of the glass cases at the museum, and it was received very well by those who viewed the collection.  This is one of the first Freedmen History exhibits featured at an Oklahoma museum.


Part of the goals of the members of the Choctaw Freedmen Association and TOFHA is to research and publish the stories of the African-Native people.  So, not surpsingly, the first stop that I made, along with colleague Terry Ligon was to start documenting our events this weekend, as well. Terry, noted graphic artist and photographer immediately began capturing images of the weekend, including the history of the building of the museum, for it was at one time a Creek Freedmen school and orphanage. 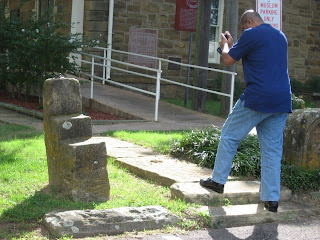 Terry Ligon captures some of the history of
the museum site, which was at one time
a Creek Freedmen School 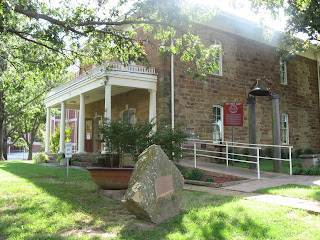 Five Civilized Tribes Museum, Muskogee Oklahoma
Once a Creek Freedman School & Orphanage
In addition to the special Freedmen exhibit were a series of paintings reflecting African-Native history in the museum gallery.  Choctaw storyteller Tom Tingle told a story of life and contact between Choctaw and those who were enslaved in their communities.  A book entitled  "Crossing Bok-Chito" was authored by Tom Tingle, and a rare story of African-Native contact is told.  Surprisingly the beautiful illustrations from the book were on display at the Museum in the gallery.  This story of slavery, of friendship and of freedom is a featured part of the weekend's conference. 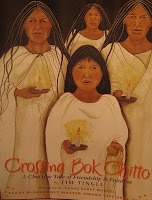 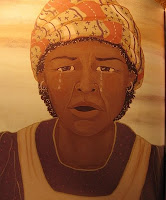 I am preparing to go to the conference lectures this morning and look forward to hearing the presenters.
Posted by Angela Y. Walton-Raji at 5:22 AM