Freedmen of Tishomingo, Struggle to Educate their Children 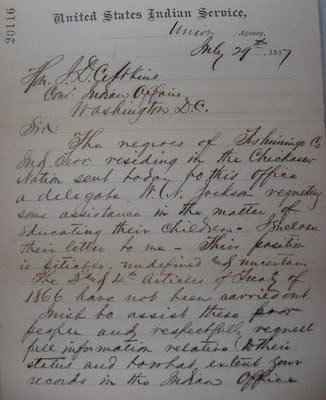 1887 Letter pertaining to the Freedmen of Tishomingo
Source: National Archives, College Park MD
More than $300,000 were given to the Choctaw & Chickasaw people to assist in determining the fate of their former slaves.  Many in the tribe wanted to simply remove the former slaves to the Leased District. This would remove all traces of slavery having occurred on their soil. The tribes were eventually given Federal US funds to assist with this process, but the agreement was not honored, the Freedmen received no assistance, and 20 years later, their fate had not yet been determined. The  funds were received and apparently used, but not for the benefit of the Freedmen, and so many in 1887, remained still destitute with an undetermined future.

The letter above indicates that in the 1880s, the primary concern for those in Tishomingo, was the children. They wanted their children to be educated, so they would not grow up illiterate and without opportunity.
Some 20 years after freedom came, the Freedmen of the Chickasaw Nation were in a very sad state.

Many resided now in a land where they were resented for their freedom, and and at the time that the slaves were freed in 1866 (a full year after the Civil War) many were simply turned loose with no provisions, no money, and after a lifetime of servitude, no skill in negotiating pay for work.  Some wanted to leave and live in peace, others wanted to remain in the land of their birth, and where their parents and loved ones were buried

Most shared one primary desire, however----they wanted their children to learn. Teachers, were in need as much as food, clothing and shelter, and their needs were so strong that they sent a representative to Washington to plea on their behalf.  The representative was W. N. Jackson, and he traveled meet officials in the U.S. Indian Service, and to speak on their behalf.

The letter continues to describe their fate, and it was acknowledged in this letter that this impoverished population had continued to suffer from poverty, and neglect. 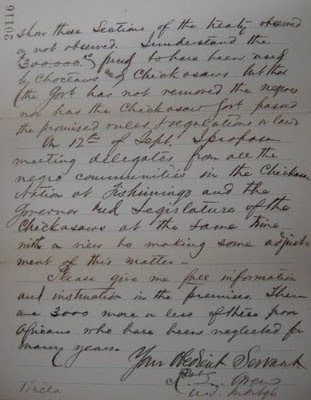 2nd page of letter from US Indian Service
Source: National Archives, College Park MD
The struggles continued for the Freedmen, of all of the tribes, but there were unique struggles in store for those in Chickasaw Freedmen communities.  Generations later, many chose to leave "Little Dixie" as the region was called by those who suffered under state enforced Jim Crow laws. However, there are a few documents that remain, that reflect the struggles of a people who were determined to live, raise their children in dignity and to move ahead.
Today, many of the descendants of the Freedmen of Tishomingo and many other communities, now study to find those long buried stories, including those stories of their family struggles to survive.
This letter reflects a very small portion of that larger story.
Posted by Angela Y. Walton-Raji at 8:18 AM

I have a GGG-Grandmother Mariah Musko (surname also spelled Moscow) from St. Martinville, LA and born in LA. Her father was born in VA and mother in LA. I am wondering if this surname is from the Muskogee Indian tribe?

In the particular document from the Pioneer interviews, the person interviewed was being asked about his parents, and their birthplace in Mississippi was given. But the interview itself took place in Oklahoma in the 1930s.

Thank you very much for taking the time to respond to my query. I enjoy reading your posts, keep up the good work.