A Close up of Hagar Meyers on a Census Record
Her name has not appeared in many places.  But she might be the very person who brought the Green Peach War to an end and saved hundreds of lives in the process. Her name was Hager Myers, a Creek Freedwoman.

Hagar Meyers in 1930 census is shown living with son H.S. in Muskogee, Oklahoma
What is her story? Can she be found? Does she have descendants?

The one reference to her is found in the Indian Pioneer Papers.  A elder gentleman, Scott Waldo McIntosh was interviewed for the W. P. A project.  He was a Creek Citizen and he was part of the faction of Creeks that followed Isparhecher, during the years of the Green Peach War. He was also the son of William McIntosh a Creek leader, and in addition---he was also a Creek Freedman. Having been close to the Creek leaders, many incidents he witnessed first hand.  His telling the story of the Green Peach War was an interesting piece to read---but he made a reference to a woman, that possibly brought the war to an end, and she is the focus of my search.

He spoke of Isparhecher, or "Spieche" (the way the name is often pronounced). In his interview he stated: 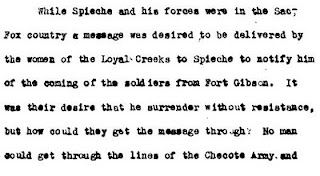 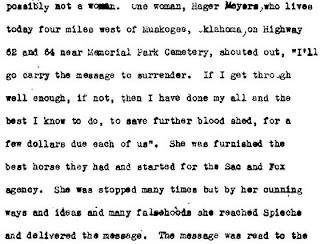 The man telling this story, was Scott Waldo McIntosh, also a son of William McIntosh. He had been present during many critical events that occurred in the latter 19th century in the Creek Nation, and his interview was extensive, numbering more than 20 pages.

(The narrative switches sometimes from his voice to that of the interviewer speaking about Mr. McIntosh.) It is quite clear that Mr. McIntosh had a strong sense of historic preservation as he spoke about the need to care for the old burial sites as well as the battle grounds. Then he made another appeal for the recognition of Hager Meyers: 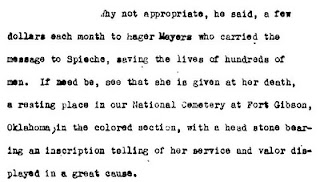 Source: Excerpts from Indian Pioneer Papers
Interview with Scott Waldo McIntosh,
(Vol. 58 Interview #6559)
Considering that Mr. Harrison had been with Isparhecher during the Green Peach War and was there when they did surrender, he had no need to invent the story, and it is quite possibly accurate. With that being so---can anything be learned more about Hagar?

I am not certain as to when she died and where she is buried.  There does not appear to be a burial for her in Ft. Gibson, though Mr. McIntosh had suggested it. She is probably buried at Old Agency Cemetery, which has fallen into a state of neglect and disrepair. It is the community where she lived, and quite possibly is where she is buried.

1910 Census, Muskogee Oklahoma
In 1900, they lived next door to their oldest son, Henry, still in Muskogee, in the Creek Nation.

1900 Census, Muskogee Oklahoma
Since there was no Federal Census prior to those years, Hagar, might possibly be found on the Dawes Rolls:
Sure enough on Creek Freedman Card #1057, John and Hagar are found.

The reverse side of the card reveals information about her parents. Her father was Harry Lewis, and her mother Diana Kernal was a slave of Creek Indian, Sukey Kernal, Her husband John was the son of G.A.G. Myers, who was a US Citizen and not a citizen of any of the tribes in Indian Territory.

Unfortunately---as many of the Creek interviews are missing---there is no interview for the family.

In the 1936 City directory for Muskogee Oklahoma, Hagar Myers is found living in Rte. 1 in the Agency community. 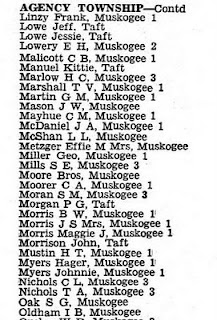 Entry from 1936 Muskogee City Directory
Nothing more is known about this woman, who apparently lived a quiet life, and died where she had spent most of her life. Without a small reference to her, by a witness to the surrender of Isparhecher in the Green Peach War, her name would not be known. But the actions of this woman forcing her way behind the lines, to get a message to Isparhecher, a massacre was prevented and lives were saved.

It is hoped that someday some descendants of the Meyers line may produce a photo of this woman. Her life was a simple and humble one.

She showed courage one day during a time of conflict, and worked her way through a line of soldiers to deliver a message of Isparhecher.  Lives were saved, and someday her name, thanks to Scott Waldo McIntosh, we can call her name.


May you continue your rest in peace Hagar Meyers.
Many are here today, for the courage you showed on one day.
Posted by Angela Y. Walton-Raji at 9:38 PM

Scott Waldo McIntosh was my 2nd Great Uncle! Thank you so much for making him more real for me.
Lisa McIntosh