Free Men, Slaves and Slave Traders in the Creek Nation

Many of the early days of contact between Africans and members of Creek Nation, occurred when runaway slaves from the United States found themselves in communities in the Creek Nation.  During those early years, in the late 1700s, according to scholar Gary Zellar, in the book African Creeks the time was one where slaves were not taken hostage or enslaved, but one in which there was a cooperative relationship. Many who interacted with Creeks, quickly learned the Muscogee Creek language and served as interpreters for several decades. One of the more popular interpreters was a black man known as Ketch. 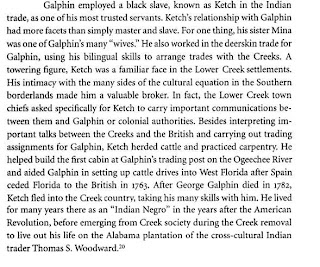 Source: African Creeks: Estelvste and the Creek Nation by Gary Zellar, University of Oklahoma Press, 2007
Over the years relationships changed and it was learned that there was a price on the head of many who were of African descent, and eventually slaves from other communities were captured and returned for reward, and/or sale. Zellar points out that the years of the American Revolution brought about a change in the relationship with blacks and by the latter part of the 1700s, it was realized that slaves could be captured and that rewards were often offered for their capture.

Source: African Creeks: Estelvste and the Creek Nation by Gary Zellar, University of Oklahoma Press, 2007
By the time of the removal there were many slaves brought west with all of the tribes, including the Creeks, and black chattel slavery had taken a strong hold. While studying this historical fact, I had questions.

Could slave traders to be found in the Territory?

While reading Pioneer papers, I was surprised to see an interview referencing a man from the Creek Nation, who was said to have been a prosperous slave trader. Richard Adkins was the grandson of Creek Indian Ben Marshall. Adkins was interviewed about his life in the Creek Nation, and he spoke in detail about his grandfather Ben Marshall, and although this narrative was written in the third person, it is interesting indeed to see a reference to the fact that he came from a slave owning family, and a slave trading family.
Richard Adkins also described life with his grandfather Ben Marshall, and how he was a businessman of many  specialties. Among his goods that he traded regularly--were human beings. 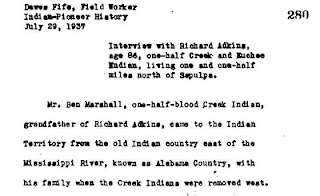 Digital Collections, University of Oklahoma, Western History Collection
Indian Pioneer Collection Volume 1, Interview with Richard Adkins
So it appears that during the years of the Civil War, like many slave holders, Ben Marshal made the effort to get his slaves out of the way of Union soldiers, so that they would not get the idea of freedom in their minds, and would not have opportunity to flee to freedom. But----how interesting and relieving to read that some of the slaves had escaped. They had resisted!!!
This is one of the few references to escaped slaves tied to a specific slave owner.  It was also good to see that there was resistance, and some even if only a few, had been successful in their escape.  The references to those who "went North" refers to those who had left with Opothle Yahola and gone into Kansas.  Many of the male slaves who left eventually returned as soldiers in the 1st and 2nd Kansas Colored Infantries (later redesignated as 79th and 83rd US Colored Infantry). There were others who had returned as Union soldiers with the Indian Home Guards as well. But it was good to read even from a family member of the slave holding family that the act of resistance had taken place, for the enslaved people in the Indian tribes, like their brethren in the United States, yearned for the same thing---the right to live as free men and women.
As a genealogist I was curious about two things---could I find out how many slaves Ben Marshall had?
And could I find any slaves of Ben Marshall in later years?
I decided to look at the 1860 Slave Schedule. I expected to find some, but I was surprised at how many I found: 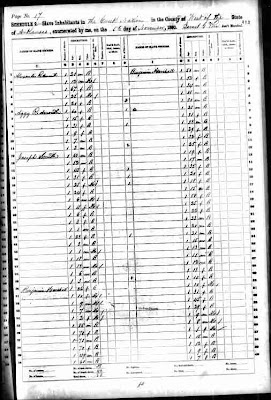 Source:  8th Census of the United States, National Archives, and Records Administration
1860 M653, The Creek Nation, page 17
Upon close examination, Ben Marshall's name begins near the bottom left and the list of slaves that he owned was extensive.  Looking at the list, more closely one sees elderly people among the enslaved. 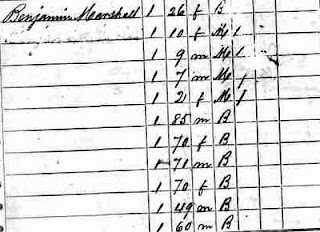 Elders were listed among the enslaved
I was surprised to see that the list of his slaves continued on the next page: 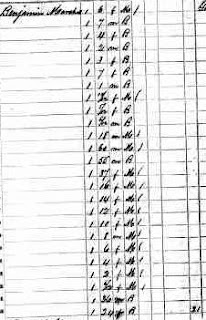 In total---in 1860, a year before the war began, he owned 76 slaves! I wondered if I could find any in later years, who may have lived during the years of the Dawes Commission era. In the Richard Adkins interview, I learned that Ben Marshall died during the War, presumably down south where he had taken many of his slaves.

I did wonder also if there were any of his slaves that might have joined the Union Army could be identified.I looked at the records from the National Park Service database of Civil War soldiers.  I did notice that there was a soldier called William Marshall who was one of  the black soldiers that served in the Indian Home Guards. 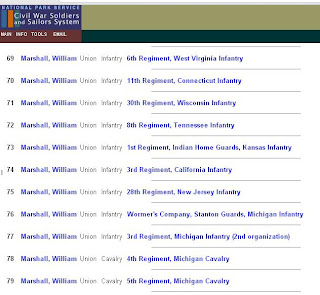 I became curious if I could learn more about William Marshall.  Did he live long enough to file a Dawes card in the 1890s?  YES!!!!!
And then I was amazed at what I found: He was a slave of Ben Marshall. He would have been one of the slaves that Richard Adkins had known that had escaped to the "North."  But there was more. 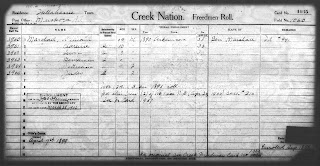 William Marshall was a slave of Ben Marshall as indicated on his Dawes Card
The reverse side of the card, would hold even more information that caught me by surprise: 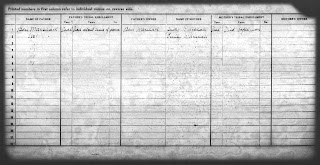 William Marshall's father was Ben Marshall, the slave owner and slave trader.
Ben Marshal, the slave trader was the father of William Marshall, the Freedman.
And William was one who did escape from his own father, to join the Union Army to fight those even from his own tribe who had joined the confederate army and who had vowed to keep others enslaved.
So, with the Pioneer interview, I was able to not only document a slave of Ben Marshall, I found one of the slaves, and that slave would have been a sibling to Richard Adkins' mother- and therefore also an uncle to Richard Adkins.  One of his own uncles was a slave in the family.  This of course happened in many places where people were enslaved, and should not be a surprise. But this is one of the first times I have found a documented slave trader listed as the father of one of his slaves in Indian Territory.
And there is the irony-----the descendants of William Marshall----all of whom are also direct descendants of Ben Marshall the slave trader, are not eligible for admission to the Creek Nation today. Their "sin" is having been born of an African woman, and like many of the slave holding tribes, slave descendants are still excluded from citizenship to this day.  Had William Adkins mother been white the descendants would be members of the tribe today. Interestingly, these policies have yet to be addressed by the citizenry that acknowledges that the practice is unfair, but somehow still, ok.
But---the history is there, and the history is a rich one. This small glimpse into the lives of persons from the Creek Nation is only a beginning.
For the descendants of Ben Marshall's slaves, there are additional  records, to study.  With the Creek Nation, many interviews are missing and were never microfilmed.  Some claim it is because of blended families like that of William Marhsall, but that cannot be substantiated. However, for the descendants of the family of William Marshall and other families like his, there are other enrollment cards, there is also the 1895 Old Series cards that unlock the doors for many Creek researchers, and there are the rich interviews from the Pioneer records, as well as Military records. The Civil War Pension file of William Marshall will tell even more stories from his life.
This is a story that can be told from many perspectives, free people, the enslaved, slave owners and slave traders, and those who resisted! All stories deserve to be researched and told! This is a mere beginning.
Posted by Angela Y. Walton-Raji at 9:10 PM

Thanks for this informative posts...Loved it!

Enjoyed this article very much. Tina

Thanks Kathleen! History is so fascinating, isn't it.

gtownma, I am glad that you found the article interesting! Thanks for visiting the blog!

Excellent use of the documents to tell this story. Once again we see just how intricate the relationships of family, culture and history evolved in Indian Territory.

Wish I could say I'm surprised that the slave trader fathered a child by one of his slaves. Despite the denials we continually see just how prevalent this practice was among the Five Slave Holding Tribes.

How does one go about getting admission to the Creek Nation? The reason I ask is Richard Adkins is my great,great,great grandpa. His daughter was Cerwilla Adkins who married Henry Carter Burgess and they had Ovola Burgess who then married Dick Emory Compton who then had Fred Compton, my grandpa who is still living. We had always been told we had Cherokee Indian but as I do the ancestry research I find documentation it was Creek. Cerwilla (Adkins) Burgess passed away in 1910 when Ovola was a very young girl and as we've been told she wasn't allowed to live on the reservation since her "half breed Indian" mother was no longer alive.
If anyone has more information please email me at lady_hawk72@att.net and put ancestry info in the subject line. Thank you, Leslie Hawkins

Such an interesting article! A lady reached me last week telling me to look into Benjamin Marshall as possibly being a member of my family. My dad's (and my) last name is Marshall, and his dad was Austin Marshall (born 1892 or 1893) from Columbus, GA, but we cannot find out which man named Marshall gave us this name. So thanks to your work, I have some more leads to see if maybe one of Benjamin's progeny could be our missing Marshall man! Thank you. Fascinating.