Video from YouTube.com/estelusti
There were dozens of communities where the Oklahoma Freedmen lived.  As mentioned in the video, among them were Berwyn, Milo and countless other settlements throughout Indian Territory. More widely known were those settlements that became full towns of which only a few remain today.

Not enough is written about the Freedmen communities and the quality of their lives before and after the war.  Berwyn and Milo, once exclusively  Freedmen communities are now part of the town called Gene Autry.  Nothing remains even in the  name to reflect a different kind of history. However, there are a few places were one might find descriptions of the lives of the people who lived in those settlements before their communities  became white-washed and erased from the landscape, completely.

Ed Abram was a Chickasaw Freedman.  His family was enslaved by the Colberts.  He eventually lived in the Freedman settlement of Milo and in his interview in the 1930s, he told part of his life story and provided a glimpse into the life of black Chickasaw families. 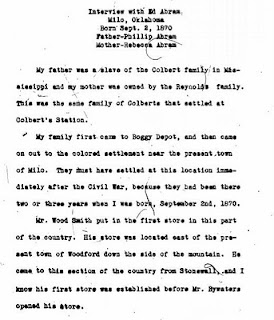 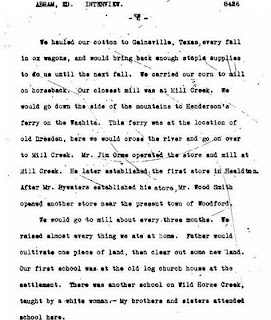 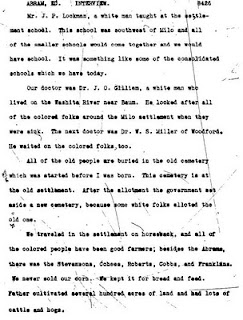 Like many Freedmen there is an enrollment card but little other information from the interviews. However, it should be noted that Ed Abram was married to a Chickasaw woman.  See the front of his Dawes Enrollment Card: 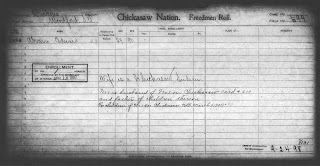 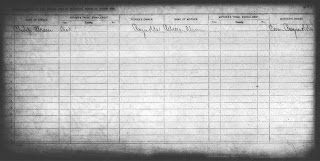 Enrollment Card of Amanda Abram, wife of Ed Abram
Source: NARA Microfilm M1186
Choctaw by Blood 610
Amanda Stevenson Abram was 1/4th Chickasaw.  Her father was a Freedman and her mother was a Chickasaw by blood. As a result, she is on the By Blood rolls, making her descendants should they wish to be, eligible for enrollment in the Chickasaw Nation, today. (Her image appeared on the video above.)
Descendants of those who ancestors were on the Freedmen Roll, like their enslaved ancestors, are consider ineligible for enrollment, although their status as slaves made them ineligible for freedom.
However, the lives of the Freedmen however, are lives worth documenting, and though the communities have been dissolved, and largely forgotten by many---thankfully records remain and one can still learn about their lives by following the trail of names and the stories that tell so much more.
Posted by Angela Y. Walton-Raji at 8:15 PM

My Grandmother is a Stevenson married a Lee from Tatum Ok and lived in Milo OK, her Name was Juanita Stevenson she and her husband Lathe Lee of Milo OK this is all is known to me.

I am intrigued to have stumbled upon this page after trying my luck at finding my families history all this time. This is my great-great grandmother and grandfather and I am excited to have come across your blog. Thank you for the information.