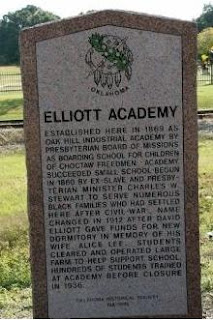 Elliott Academy once known as Oak Hill Academy is noted on this Oklahoma Historical Marker
Photo by Byron Hooks
Known in its earliest days as Oak Hill Academy, this long forgotten institution was known in later years as Elliott Academy till it vanished from the landscape of the Choctaw soil upon which it once stood.
This was once a boarding school full of dormitories, school buildings, smoke house, an active farm so much more, to sustain itself.  The school was built by the Presbyterians in the 1860s and for many years this missionary endeavor by Presbyterian missionaries brought education to the children of Choctaw Freedmen. Known for its beautiful grounds and facilities, nothing beyond this historical marker represents the grandeur of this long gone institution.
Life at Oak Hill was well described in the book by Robert Flickinger, and also by a former student, Jordon Folsom a Choctaw Freedman who was interviewed in the Oklahoma Pioneer papers.  Folsom's family were slaves of the large Folsom clan in the Choctaw Nation, and his interview in the Oklahoma Pioneer Papers was extensive.  He attended Oak Hill and described life as a student. 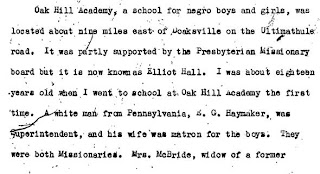 Excerpts from the interview with Jordon Folsom, Choctaw Freedman
The interview with Mr. Folsom is a lengthy one, describing life as a student and also a long lost LeFlore Cemetery once on the grounds of the school.
Sadly, little is known of the school today.  In the 1900s after statehood, the school was known as Elliott Academy when a large donation was made to build a school named after the wife of David Elliott.  The school was eventually absorbed into the segregated school system, and over time, like many black schools, it was closed.   The buildings are now gone, and nothing but a sign near the Valiant Cemetery mentions it by name. 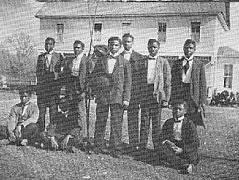 Young men in front of boys residence hall at Oak Hill
One of the more well known men of the community was Wiley Homer who was a supporter of the school and one who frequently spoke at Oak Hill Academy.  He was a slave of John Homer, a Choctaw Indian, and while a boy, was hired out to Samson Loring to watch cattle. He learned how to read by memorizing and  learning the variations in the cattle brands. When his natural aptitude had been noticed he heard his employer Loring comment about his natural intelligence, he then vowed himself to learn as much as he could. So this self-taught man began his own efforts to pursue education.
The Oak Hill book actually describes how Wiley went about his education after freedom.  (Note Choctaws abolished slavery in 1866 and a year later Wiley Homer began his personal quest for enlightenment.)
"When, at 16 in 1867, he was accorded his freedom he obtained a primer and first reader, and undertook to master these by private study. About four years later, a testament and shorter Catechism were given him. He now had what was regarded as a good library for a young man and he applied himself to the reading and study of these books, in the evenings and other periods of spare time. The testament was frequently taken to the field when plowing, in order that he might learn to read a verse or two, while the team was resting, or get a neighbor, passing on the road, to read it for him. The reading of the testament soon awakened a desire to be a teacher and preacher, and this greatly increased his interest in the study of that book." 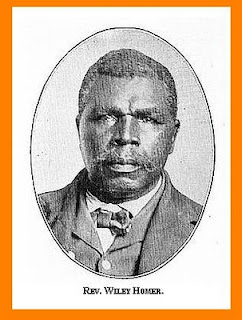 Portrait of Wiley Homer
He became interested in establishing a church and he created a small brush arbor place of worship and later became the founder of Beaver Dam Church in Grant, I.T. in 1873.  Many graduates of Oak Hill later moved to the same community in Grant, Indian Territory and joined the same church. 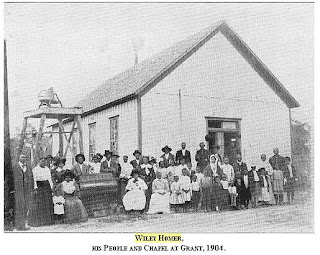 This is an image taken in 1904 at the Beaver Dam Church, founded by Choctaw Freedman Wiley Homer
Source: Oak Hill Academy for Choctaw Freedmen, by Robert Flickinger
In the early years of the 20th century, Oak Hill continued to thrive. Students from Idabel Valiant, Grant, Hugo, Wynnewood and other places where former Choctaw slaves lived, flocked to this distinguished academy where education flourished and where a path was created to a new way of life and enlightenment. 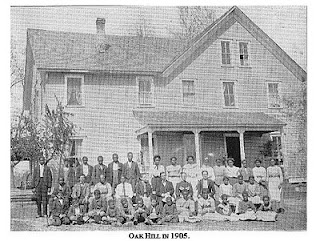 But Oak Hill had two major setbacks due to fire. In 1908 the Boys Hall caught fire.  Funds were secured to build another dormitory. Then two years later the Girls Hall also had a fire. The third floor was severely damaged. In addition to that statehood brought about the beginning of the end of the Academy.
The new state provided laws for the establishment of schools an Oak Hill school district was "created" that split the area of the grounds of Oak Hill community. The new state armed with a new law of racial segregation also set to quash any influence the Oak Hill community had, by establishing a law that wherever there were 6 students existed a new district or school had to be established. Thus the miles that separate families living on their allotments in rural areas, were then also used to break up the once community that had thrived as a social unit.
Many parents were very much afraid of repercussions that might occur if they did not comply, especially since he new state of Oklahoma was now under the influence of a strong southern white bias that had no interest in educational development of black people, so the end of the Oak Hill was forthcoming. Within a very short time, three public schools were established in the vicinity of Oak Hill and parents were warned against not complying with the new rules.
"The mission schools previously established for many years in the chapels of the churches of the Presbytery of Kiamichi became public schools and the pastors that continued to teach became public school teachers."
The school did continue for several years, average enrollment around 100 students. 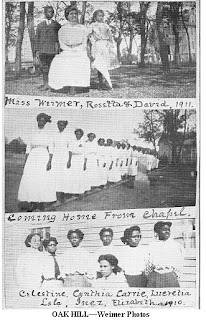 In January 1908, when P. K. Faison, first superintendent of the public schools of McCurtain county, made his first visit to Oak Hill, he stated that Wheelock and Oak Hill Academies were the only graded schools in McCurtain county at that time. 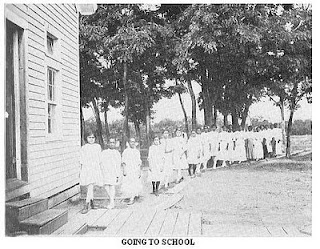 In 1910, the school received a donation to build Elliott Hall. This would eventually replace the burned dormitories. A $5000 donation was made by David Elliott who donated funds to build a new residence hall to be named after his wife Alice Lee Elliott. The school name was subsequently changed from Oak Hill Academy to Elliott Hall Academy. This new hall provided an office for the superintendent, a library and reception room, places for boarding and laundry departments, rooms and bath. The school stood on a small elevation known as Oak Hill.
Eventually absorbed into a segregated school system of Choctaw County, the legacy of Oak Hill Academy and of Elliott Hall, eventually was removed from historical memory. The school operated till 1936.
Today only a marker remains.
WHERE WAS THE SCHOOL?
Today, there are no physical traces of the school.
Outside of Valiant Oklahoma, near the entrance to the Valiant cemetery, is an historical marker.  (see image at top of this post) I
t tells a brief story of this school, which for several decades brought the only education in this part of Choctaw country to the children of slaves who lived in the Choctaw Nation. An aerial satellite view, using Google Maps, shows where the marker is. 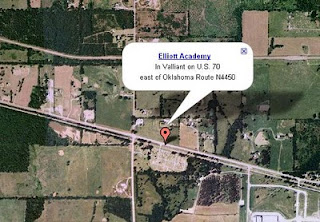 Aerial view of location of historical marker
However, while using Google Maps to locate the marker, I typed in the name several ways, and found a surprising entry on another Google Maps image.
When I typed in Elliott School, Valiant Oklahoma, another image indicator appeared on the map. Several hundred feet away from the entrance to the cemetery, the indicator pointed to something that appeared to be the entrance to some private property. 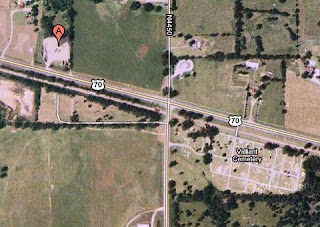 In the upper right hand portion of this image is an indicator pointing to something that was once there.  The lower portion of this image shows the cemetery where the historical marker stands near Valiant Cemetery.
Again using Google Street View, I decided to take a street level view of the site where the marker in the image above points. 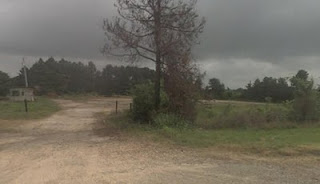 Is this the old entrance to what was once Elliott Academy?
Source: Google Street View Image
Looking at that same site again by Google Satellite image, I zoomed in for a closer view, and one can see scars in the ground indicating structures that were there at one time there.  Could I truly be looking at the remains of Oak Hill? 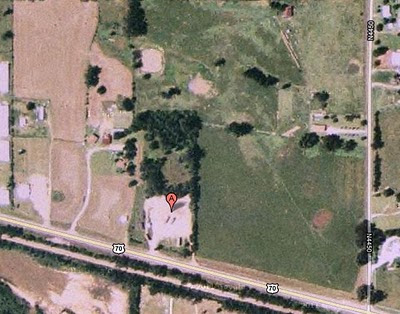 Could those images and scars on the soil be the ghosts of Elliott Hall, and other structures that once graced the grounds of Oak Hill, and later Elliott Academy?
Only my imagination now speaks to me as I look at this image.  Could that light diagonal scar across the grounds be the path that the students in two photos above used to cross their campus? Could the larger rectangular scar be the remains of Elliott Hall?  Is there any local who might be able to answer these questions?
I do not know the community of southeastern Oklahoma very well, but I treasure the history of the people who attended Oak Hill, and whose minds and futures were nurtured upon it's soil.  I celebrate the pride of the Choctaw Freedmen who were trained at Oak Hill and later Elliott Hall, and I am saddened that nothing remains of its old glory than  a marker several hundred feet away.
How much I would enjoy seeing more unfold of the history of this region and I hope someday to learn of a new surge of pride and sense of history from this small corner of Choctaw Country.
The people and stories in and around what is now southeastern Oklahoma is a rich one.  Armed with a fierce desire to learn and aided by the efforts of Presbyterian missionaries, the Choctaw Freedmen community was able to plant a strong desire for learning and to nourish it for decades. Hopefully some day the lives of the people who lived here, will be told.
All photographs of the school are taken from the book The Choctaw Freedmen and the Story of Oak Hill Industrial Academy by Robert Elliott Flickinger.
Posted by Angela Y. Walton-Raji at 5:07 PM

Angela, Thank you for coming by my blog and leaving a link to this post about the school at Valliant.