In a previous article I shared with my readers the results of one of the autosomal tests that I have taken. Included was an image of the ethnic percentage breakdown revealed through that kind of test.
Having taken an autosomal DNA test with both Ancestry and 23andMe, I often find the visual tools offered by the testing companies to be useful and fun to examine.* 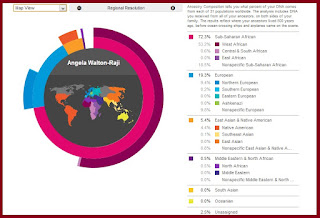 Many of us in the DNA genealogy community have shared similar charts illustrating our DNA ethnic percentages, and it has been interesting to see the breakdown. And for myself having a documented tie to the Five Civilized Tribes, both "Freedmen" and "By Blood" the results expected, were confirmed. But it is always important to point out that DNA testing is only a tool and it reflects sometimes a mere recombination of DNA markers from the ancestors and not the entire genealogy of anyone. In other words, it does not replace research, for it is genealogical research that will tell the stories that we seek.

Recently, in social media, a timeline that 23andMe provides reflecting the time period in which a particular ethnic group most likely entered your ancestral line. I decided to look at my own results on 23andMe, and found the data to be consistent with what my research has revealed. I found the illustration to be quite fascinating and although for each and every group. Although no genealogy is ever "complete" I still found the illustration to be fun to examine, and not in contrast to data already collected. The time line was somewhat consistent with some of the research of my well documented lines.

Of course the time span is quite broad, but looking at the Native American ancestry, on my own time line, it does coincide with the life span and the period of exposure that my African ancestors had to the documented Native ancestor. I do point out that most features on the three major autosomal testing sites should be considered simply tools, and DNA testing for genealogical insight is still in its infancy. So there is nothing conclusive, or detail-specific from the time line. And research most definitely continues on all of my lines, and the effort to document the family and to tell the story is one that continues.

But for those who have taken autosomal tests with 23andMe, AncestryDNA or  FamilyTreeDNA there are numerous tools to explore as they may assist one with providing other insights into the past, and can give one more to add to the family narrative.

*(Note that several years ago some DNA tests were conducted in Oklahoma for those wishing to illustrated Native American DNA. However the test utilized was not an autosomal tests, so many who took those tests received "false" negative reports. Autosomal tests are more reflective of the ethnic percentages of one's ancestral background and it is suggested that individuals take one of those three autosomal tests available.)