(As part of a new series on this blog, a family from Indian Territory will be celebrated and a portion of their history will be shared. The goal is to honor 52 families in 52 weeks for the new year. With this being the second week there will be 2 families honored this week, and then 1 family per week afterwards. The intention is to illlustrate and share the amazing resilience of the families that descend from persons once enslaved in Indian Territory. Theirs is an amazing story of survival and adaptation to life on the frontier. Though seldom mentioned, the Oklahoma Freedmen have a rich story to tell, and this is a small effort to tell some of their stories.) 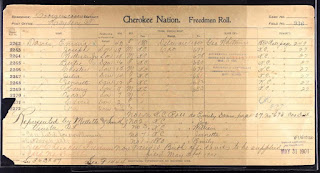 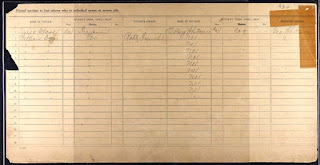 (Reverse side of card)
Source : Same as above


By looking at the enrollment card, Emma Davis appeared in front of the Dawes Commission on May 30, 1901 to enroll herself and her children as Cherokee Freedmen. Emma was 43 years of age and had been enslaved by George Whitmire. At the time of her appearance at the Dawes Commission, she was living in the Cooweescoowee District of the Cherokee Nation. Her enrollment card reflects a large family with her children Joseph, William Jr., Bertie, Chester, Julia, Jennette, Henry, Oscar, Carrie, and later, infant Lottie. (Lottie's name was added in October of that year, after birth affidavits were submitted.)

The family had been enumerated earlier, in the Cherokee Nation as evidenced by the notation of how they were previously on the Kern Clifton Roll, a roll taken several years earlier. The enrollment card also indicates that they had representation for them by attorneys Melette and Smith, in Vinita.

The reverse side of the card contains more data on the family. Emma was the daughter of Issac Glass, and Betsey Whitmire. Her father Isaac was a Freedman, who was deceased at the time she made her application, and her mother also deceased was at one time enslaved by George Whitmire of the Cherokee Nation.

Emma's husband was William Davis who was also a Cherokee Freedman of the Cooweescoowee District. He was at one time enslaved by Robert French.

The Interview that accompanies this file contains amazingly rich genealogical data. Also it appears that William Davis, Emma's husband was actually the one who spoke on behalf of the family. It is not certain why his name is not on the same card. Nevertheless the data is quite rich, because the exact dates of birth are included, in addition to specific questions about the children were addressed. 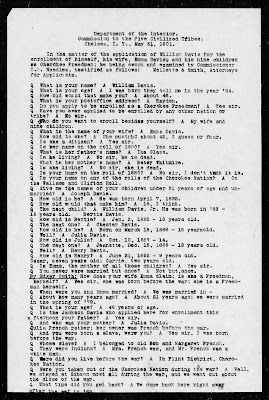 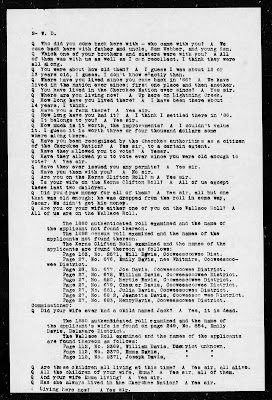 In the interview, William Davis goes into detail about the family's status, and points out how they were recognized as Cherokee citizens. He provides data about his slave holders Bob and Margaret French. Bob French, he pointed out was white and his wife was Cherokee. In addition,  he also shares information about his own parents and siblings. He describes how they were taken to Ft. Gibson during the war, but returned to their own community at the end of the war. 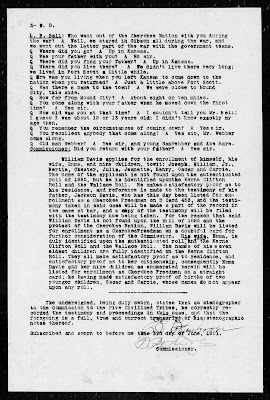 There is much discussion and later analysis in the file that contains even more family data. Included was mention of William Davis' own father Jackson Davis who also has a card. (D463)

The file contained additional information including a birth affidavit for children, Oscar, Carrie and Lottie. 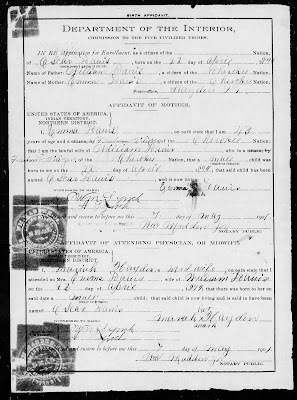 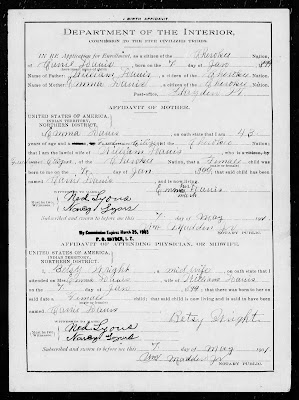 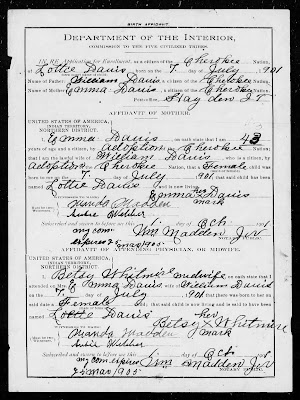 A final interview is included in the Dawes file. Joseph Davis appears to be a grown son of Emma and William, and his interview is also included with this file. 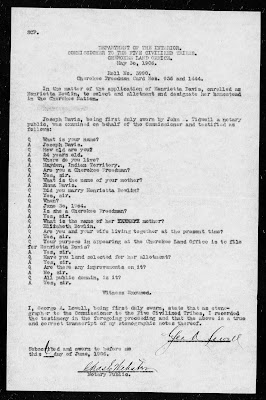 On the enrollment card (see 1st image above) William Davis's name does not appear. However, it turns out that he did have a card of his own, and was subsequently rejected by the Dawes Commission, however, it is still valuable to study and to include with the family data. (A future article will feature the extended Davis family.)

The file of the Davis family of Hayden, Cherokee Nation is a genealogically rich one. There are other records that will reflect more information that for the family, but this data from this initial file provides a rich beginning for the family research.
Posted by Angela Y. Walton-Raji at 12:45 AM