(This is the second in a series devoted to sharing families once enslaved in Indian Territory. The focus will be Freedmen from the Five Civilized Tribes. They are also part of another effort to document 52 families in 52 weeks. Theirs is an amazing story of survival and adaptation to life on the frontier. Though seldom mentioned, the Oklahoma Freedmen have a rich story to tell and this is a small effort to tell some of them.) 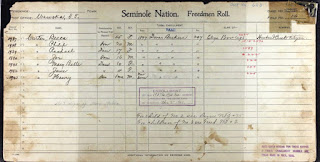 
Becca Carter was the mother of several children and she appeared in front of the Dawes Commission to enroll herself and her children. This was a family of Seminole Freedmen and the enrollment card clearly illustrates the structure of the Seminole Nation. The tribe itself has always been structured by bands. With this particular family it is clear that they are part of the Dosar Barkus band. That band was and still is one of the two "Freedman" bands in the Seminole Nation to day.

On the card it is pointed out that her husband was a Creek Citizen, explaining why his name is not on the front of the card. It is also noted that one of her daughters (Rachel) later married by the time the rolls were finalized and became the wife of Nero Noble. Becca was 45 years old at the time and thus was born before slavery had ended in Indian Territory. She was said to be the slave of Eliza Bowlegs.

Note that there was no date on the enrollment card, but it is obvious that she appeared after 1897, because it was noted that she and the family had previously been enrolled as members of the Barkus band on the 1897 roll. 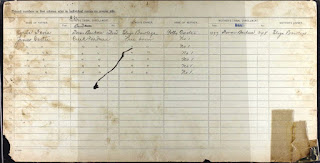 (Source: Same as above. Color Images accessed from Ancestry)


The reverse side of the card reveals more of Becca Carter's history. Her father was Cyrus Davis, and her mother was Polly Carter. The slave holder of both of her parents was Eliza Bowlegs. Both of her parents were also at one time, members of the Dosar Barkus band. Her husband's name was James Carter and he is listed as the father of the children in the household.  A notation points out that he was "free born". However not much more is known of him.  (A quick search of Dawes Records does not provide information on James Carter's enrollment as a Creek Freedman.)

Unfortunately, the Dawes Packet for Seminole Freedmen Card No. 623 is not available. A range of Dawes packets are said to simply be "empty" and her packet is among the empty ones. 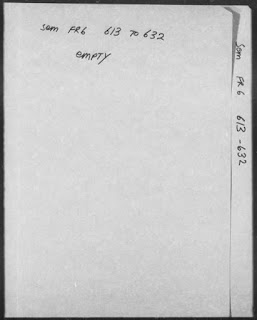 So the question arose whether additional information about the family could be found. I decided to follow the few clues left on the front of the card. First, since it was noted that Becca and her family was previously enrolled in 1897, I decided to see if that roll could be located.

There was a section of documents reflecting  the 1895 Seminole Census. Sure enough Becca called "Becky" was there on that roll with her children. They were separated by "band" and the Dosar Barcus band contained a column where the name of the spouse of the enrolled person was listed. Clearly it can be seen that "Jim" is written a side column, 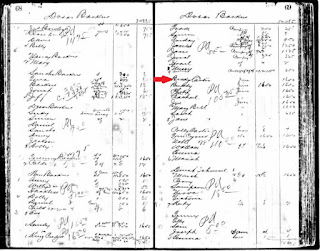 
The document came from a small collection from Fort Worth Texas with earlier records from the Seminole Nation. Thanks to a partnership with the National Archives, and also with the Oklahoma Historical Society, that 1895 Seminole census document is now available. (The page reflecting page 60 of 467 images on Ancestry.) 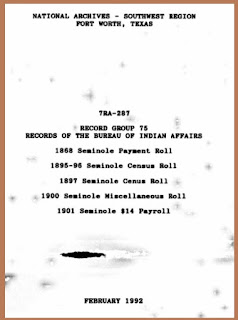 Since this set of records contained both 1895-96 Seminole Census and 1897 Seminole census, Becca and her family was indeed found on the 1897 census Roll as well. 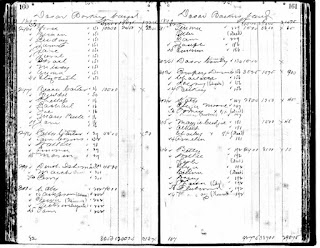 (Item appears as image 107 of 467 in same record set mentioned above.)

So although the Dawes packet was not available, could other things about the family be learned. The front site of the census card did note that Becca's children had later become parents. On the bottom of the card were notes on where to find the children of Becca's children.

(Close up of image on front of Dawes Card)

The Seminole Newborn collection reflected the enrollment of a grandchild of Becca Carter--that of Alec Carter. Alec was the son of Philip Carter, Becca's son. In that file was an extensive interview plus a birth record for the child. 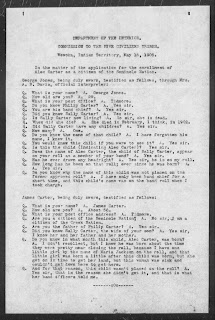 Also in this file, James Carter, Becca's husband James appears and gives a testimony as well. As was indicated earlier, James was identified as a Creek citizen. Apparently Becca and James were separated, as he mentions that he had another child, Maria Jackson whose mother was not enrolled. 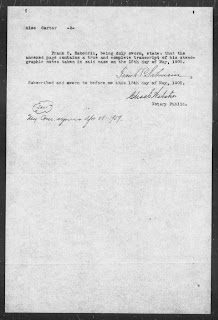 Like most Dawes records the descendants of Becca Carter have a well-documented one, even in spite of the fact that the enrollment packet is missing for the family. By searching the earlier census records, and also by following the clues in the New Born files, one can get a better glimpse of the family makeup, and the individuals whose stories are to be told.

For further research, land allotment records and other records still unexplored will yield even more about the children of Becca and James Careter a Freedman family from the Barkus band of the Seminole Nation.

**********
This is the 2nd article in a series devoted to sharing families held as slaves in Indian Territory, (now known as Oklahoma.) The focus is on Freedmen from the Five Civilized Tribes and are part of the efforts in 2017 to document 52 families in 52 weeks.

Thanks for sharing this very informative information

Becca Carter's husband, and the father of her children is enrolled as Jim Carter roll# 8963 - census card# 3196. Muscogee Creek by blood, 1/2. For more information, please do not hesitate to contact me. Hope this is helpful. rgramsr@yahoo.com. Mvto.

My name is Daniel Knighten. My great great grandfather was Bill Jones his wife Rhoda Jones.Eliza Bowlegs from Oklahoma was his slave owner is he related to the people here.